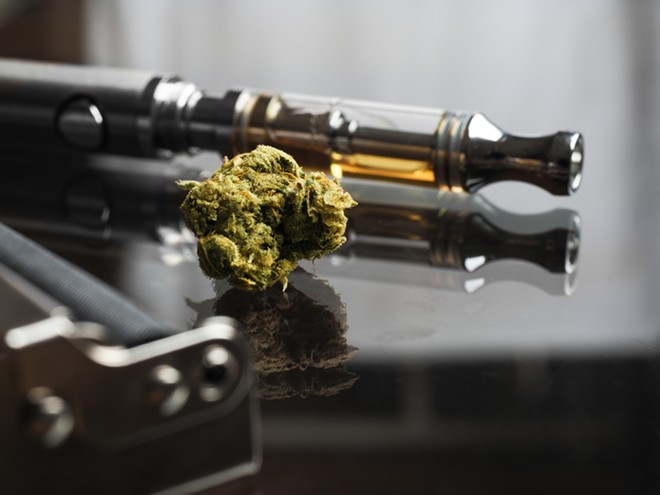 It was only a matter of time.

In recent months, hundreds of people across the nation were coming down with a severe lung illness linked to black-market cannabis vaping products.

About 25 of those cases were in Michigan. But as public health officials and lung experts across the country warned people to avoid illicit cannabis cartridges, the state of Michigan was focused on an entirely different form of vaping: flavored nicotine.

Then on Oct. 2, a month after Gov. Gretchen Whitmer first announced a ban on flavored nicotine e-cigarettes, state health officials learned that the lung illness had claimed the life of a Michigander — the first fatality in the state and roughly the 20th in the nation. The Michigan Department of Health and Human Services (MDHHS) announced the death of an adult man last Friday, but didn’t provide any more details.

“To protect public health, we urge people to consider refraining from vaping until the specific cause of the vaping-related severe lung injuries being reported nationwide has been identified,” Joneigh Khaldun, chief medical executive and chief deputy for health for MDHHS said in a news release.

Finally, on Oct. 3, MDHHS issued its first health advisory warning against the use of vaping products, “particularly those containing THC,” the psychoactive ingredient in marijuana.

But that was short-lived. The advisory was posted on MDHHS’ website with no press conference or news release. A few days later, the state removed its warning about THC vaping from its health advisory, even though a majority of the state and national cases have been linked to black-market THC vaping products.

The Michigan Marijuana Regulatory Agency also has been silent on the issue.

“As no single product or substance has been linked to these lung injury cases, we didn’t want the emphasis to be on THC, but instead vaping,” DHHS spokeswoman Lynn Sutfin tells Metro Times. “Some of the cases have only vaped nicotine products, and we wanted to ensure that was clear.”

The omission is significant because vaping is a relatively new technology, and the public is getting mixed and often misleading messages from public health officials about the cause of the deadly health outbreak. Many lung experts are also questioning the accuracy of the nicotine-only cases because they are self-reported, and some people are reluctant to admit using marijuana. In some states, patients who said they only used nicotine tested positive for THC.

“In light of the now incontrovertible evidence that the overwhelming majority of the outbreak cases are associated with the use of black-market THC vape cartridges, it is inexcusable for the Michigan Department of Health and Human Services to make no distinction between vaping legally sold nicotine and illegally sold THC products,” Michael Siegel, a professor of community health services at Boston University, tells Metro Times. “Even worse, the Department has actually removed its warning to avoid THC cartridges. It is unclear why the department is so determined to protect illegal drug dealers at the expense of hundreds of responsible small businesses in the state, but the end result is going to be the appearance of even more cases of severe respiratory disease and perhaps death.”

There are two popular types of vaping — nicotine and THC. Nicotine vaping was introduced to the U.S. mass market in 2007 as a less hazardous alternative to cigarettes. While vaping is generally considered safer than cigarettes and has helped people kick their tobacco habits, there has been a sharp rise in youth vaping, due at least in part to the enticing flavors e-cigarette liquids come in — like watermelon, strawberry milk, grape bubble gum, blueberry strudel, coffee, and cotton candy. On Oct. 2, Michigan officially banned flavored nicotine vaping liquids, drawing lawsuits from e-cigarette businesses. More than 420,000 Michigan residents regularly used e-cigarettes in 2016, according to an FDA-funded study.

But in the past few years, cannabis vaping has become increasingly popular, representing a quarter of all legal sales of marijuana nationwide this year, according to BDS Analytics, which tracks the cannabis industry. Beginning in April, people began reporting a serious lung illness after vaping THC cartridges, which traditionally consisted of cannabis oil and natural additives. But in the illicit market, pot dealers began to dilute the cannabis oil with vitamin E acetate and other toxic additives to save money.

Researchers have increasingly focused on vitamin E acetate after high levels of it were found in products used by people who have become ill. Lung experts say the acetate is dangerous when vaped.

Despite mounting evidence that tainted THC vaping products are to blame, the public continues to conflate cannabis cartridges with nicotine e-cigarettes. A Morning Consult survey of 2,200 Americans in mid-September found that 58% believed nicotine vaping was causing the illnesses, while only 34% thought THC vaping was to blame. A Sept. 25 Metro Times cover story looked at how the two issues were being conflated.

Although health officials have not yet identified a single substance or product that is making people sick, the U.S. Centers for Disease Control and Prevention (CDC), the Federal Drug Administration, and many state health departments have begun urging the public to refrain from using black-market THC vaping products. But Michigan is not one of them.


“As the CDC continues to indicate, and what we have seen with all of our cases in Michigan, is that there is no one substance or device that can be linked to these vaping illnesses,” MDHH’s Sutfin tells Metro Times. “We have had 30 such confirmed or probable illnesses to date in Michigan, and there is no clear geographic distribution or substance that we know to be the cause. We encourage people in general to recognize the severity of these illnesses and to consider not vaping until we can identify the cause.”

Lung and tobacco experts tell Metro Times that the state’s silence is going to exacerbate the outbreak. Nationwide, the number of lung illnesses reached 1,080, with at least 19 deaths, the CDC said last week. Health officials cautioned that the illnesses are showing no signs of slowing down.

“On top of all of this, the Department is defying the Food and Drug Administration, which has concluded that contaminated THC cartridges are causing disease and has explicitly warned the public not to vape THC oils,” Siegel says. “In my view, the Michigan Department of Health and Human Services will be morally responsible for future cases of respiratory disease among state residents who were not adequately warned against the specific dangers of vaping THC oils.”