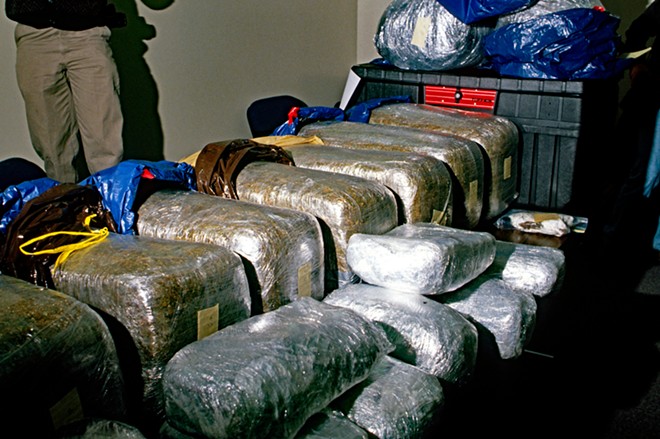 Despite the fact that both Michigan and Canada have legalized recreational marijuana, officials are reporting a sharp rise in illegally transported reefer this year.

U.S. Customs and Border Protection says they've seized more than 9,000 pounds of of the stuff this fiscal year, an increase of 1,726% from last year. And that doesn't even include 1 ton of chronic that was seized on Monday.

Christopher Perry, director of field operations for CBP Detroit, says it's due to the economic impact of the pandemic.

"The increased demand, with the border of being close to non-essential travel making it much more difficult for the smuggling organizations to move their that their products," Perry said, according to The Detroit News. "They're becoming more desperate."

This spring, a Canadian man admitted to using a small submarine to smuggle weed across the Detroit River. A Canadian nurse was also caught abusing her traveling privileges as an "essential" worker by attempting to smuggle 150 lbs. of pot into Michigan.

Perry says the majority of the weed is coming from Canada to meet demand in the U.S. Though Michigan and Canada both moved to legalize recreational marijuana in 2018, Michigan didn't allow most of its stores to open until 2019. In Detroit, recreational marijuana stores have still not been allowed, but on Monday City Councilman James Tate announced a proposed ordinance to allow them.

Marijuana isn't the only drug that officials have intercepted. Border patrol says they also seized more than 211 pounds of cocaine, more than 1.5 pounds of methamphetamines, and 15 pounds of fentanyl.

A total of 225 people were arrested, down from 549 arrests made the previous year.