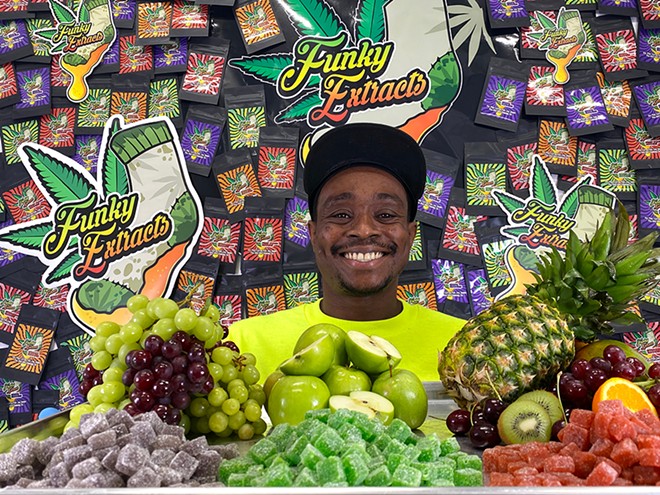 When Detroit native Jujuan "Funk" Coleman came up a logo for his cannabis company Funky Extracts, he picked a smelly sock.

"When you speak of cannabis, 'funk' is good," he says. "So I correlated 'funk' with the quality of our products."

Coleman doesn't shy away from the, let's say, dank aspect of marijuana. Once he started making cannabis-infused gummies, he decided to use full spectrum cannabis oil as opposed to a cannabis oil distillate. That means his gummies have more of a cannabis taste, but the effects last longer.

Coleman launched his new line of infused gummies earlier this month. Made with a partnership with Farmington Hills-based Pincanna at their facility in Pinconning, the products are available only for medical marijuana customers for now. Coleman says he hopes to enter the state's relatively new recreational marijuana industry soon.

Coleman started as a caregiver in Michigan's medical marijuana industry about a decade ago. When he first started making edibles, Coleman took the more traditional route of baking weed-infused cookies, cake pops, and cereal bars. He started experimenting with making gummies due to customer demand but also a new emergency rule in Michigan in 2018 that banned most marijauna-infused products that were not "shelf-stable," or required refrigeration.

Coleman says gummies are popular because they're easy to dose. "They come in small, bite-sized pieces, and there are 10 milligram doses, so it's a lot easier to dose yourself throughout the day," he says. "I just think it's a product that appeals to everyone, from those 21 to senior citizens."

That funky smell aside, Coleman says his gummies also have a focus on flavors, while products in the medical marijuana industry typically don't. His initial offerings include fruit punch, orange, green apple strawberry, and grape. More flavors are coming, "but I want to save the best for last," he says.

Coleman hopes to get his products in the recreational marijuana industry soon. For now, his products are carried at Gage Cannabis Co. stores across the state, at the Pincanna Market in Kalkaska, and Green Genie and Green Pharm in Detroit.