High but not dry 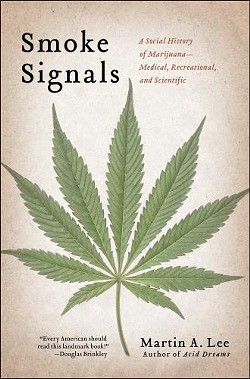 There have been plenty of books published on marijuana in recent years. Many of them have been oriented toward politics and the law, generally arguing that prohibition is misguided and its consequences are abysmal. Another group falls into the "marijuana is medicine" category, with authors citing study after study indicating the curative wonders of the weed. Yet others are how-to books: how to set up a grow room, how to grow cannabis, and how to cook it. However, seemingly in the effort to be taken seriously, marijuana activists often fall into the trap of dullness when writing their perfectly reasonable tracts.

Smoke Signals, A Social History of Marijuana — Medical, Recreational, and Scientific, by Martin Lee, mostly avoids the dullness trap by tacking toward the social side of these issues. For the most part, the book presents the stories of people who use weed while making astute points about the policies that accompany it. Near the end of the book, Lee does start piling up the studies and statistics to support his position, but losing sight of the people being affected. Still, he manages to avoid using even one chart or graph in his storytelling.

Smoke Signals begins with several pages devoted to jazz progenitor Louis Armstrong and his marijuana use. Armstrong left New Orleans for Chicago in 1922. Shortly thereafter he started smoking "gage," a habit he carried for life. Lee hints that the looseness and camaraderie of pot smoking helped the trumpeter stretch his music out into the free-swinging sound that has been defined as America's only original art form. The mid-1920s are widely held to be Armstrong's most creative years. It's also interesting that Armstrong, who used herbal medicines throughout his life, claimed that pot helped keep him healthy.

The ironies pile up when the author points out that Armstrong became first African-American to host a nationwide radio broadcast in 1937 — the same year that the Marihuana Tax Act definitively made marijuana illegal nationwide. It's this kind of depth of detail that makes Smoke Signals so interesting — the contrast of a commercially, culturally ascendant, daily-toking Armstrong breaking down racial barriers while the substance he loves is demonized into prohibition, with cops starting to break down doors in an attempt to stop users.

There are numerous facets of marijuana lore that Lee either verifies or debunks. He investigates the supposed hemp growing of the American colonial leaders and determines that, while they grew the stuff, they probably weren't smoking it. Among other sources he cites a research paper from the 1960s that concluded George Washington "didn't even realize pot could be smoked."

It's just one example of Lee substantiating his claims. The 80 pages of notes and bibliography at the end of the book bear witness to his thorough research.

Lee documents enough of the 4,000-year history of marijuana's medical use that one realizes the past 75 years of prohibition is but a weird anomaly in a long and rich tradition. "No less a figure than Sir William Osler, often called the father of modern medicine, endorsed cannabis as the best treatment for migraine headaches," he writes.

Going back to 1860 (the Ohio State Medical Society) and up to recent years, Lee cites government-funded studies that found marijuana to be medically effective. Yet government officials stubbornly refuse to let evidence guide their policies. One researcher reported that President George H.W. Bush threw millions of dollars at researchers in the late 1980s to find something wrong with marijuana. They couldn't.

Lee fingers a prominent reason why drug warriors, despite all the evidence showing their policies are both unnecessary and ineffective, still cling to their struggle: "[F]ighting illegal drugs had become nearly as big a business as selling them in the fin de siècle nineties, and powerful interests felt well served by the status quo."

The book spends a fair amount of time detailing events in California leading up to and following the passage of Proposition 215, which established medical marijuana there. In particular, the reaction of the California attorney general to derail implementation of the law seems very similar to what Michiganders have experienced with our own AG, Bill Schuette. The result in California: "Less than two years after the passage of Proposition 215, medical marijuana dispensaries in California were fast becoming an endangered species." The same can be said of such facilities in Michigan, where it took about two years for an appeals court decision in People vs. McQueen to shut 'em down last spring. The state Supreme Court has agreed to hear an appeal of that case; if it reverses the ruling, it would probably lead to more dispensaries in Michigan.

There is little specific to Michigan in the book beyond a couple of references to John Sinclair ("built like a giant panda with exploding curly hair") and a paragraph in the last chapter referencing the McQueen appellate court decision shutting down dispensaries: "Medical marijuana was still legal in Michigan — but it was illegal to buy it."

The narrative of Smoke Signals flows well as it covers marijuana use from ancient times to today's burgeoning medical marijuana movement — including turns through 1960s activism, hip-hop culture and a maze of political motivations. It gets a little eye-glazing during discussions of cannabinoids and cannabinoid receptors and how they work in the body. But that's science for you.

For the most part, this is a lively and informative book. Readers get to know details from a couple of the handful of patients who do receive 300 U.S. government-grown medical marijuana joints a month (that seems like an awful lot, especially given that the official policy states there is no medical use for the substance), groove with the Grateful Dead and wander the hills of California's Emerald Triangle, where much of the state's marijuana is grown. More than anything else, you find that Lee's closing words ring true: "To ponder the history of marijuana in America is to embark upon a political landscape so illogical as to be perverse, a world where facts don't count and common sense is ignored."

Smoke Signals cuts through the haze to distinguish what's really there — from the hemp hyping in Thomas Paine's own Common Sense, to the experience of contemporary medical patients who know the relief of marijuana.

This November, folks in Detroit will be voting on decriminalization of possession of 1 ounce or less of marijuana for adults 21 and older. But that's not the only pot issue for state polls this year. Voters in Flint will decide on the same question for those 19 and older. In Kalamazoo, they will decide on whether to allow three medical marijuana dispensaries to locate in the city. In Ypsilanti, they will vote on an amendment to the city charter that would make possession and use of less than 1 ounce of marijuana a Lowest Law Enforcement Priority. Maybe the state of Michigan will add another chapter in the annals of marijuana activism.