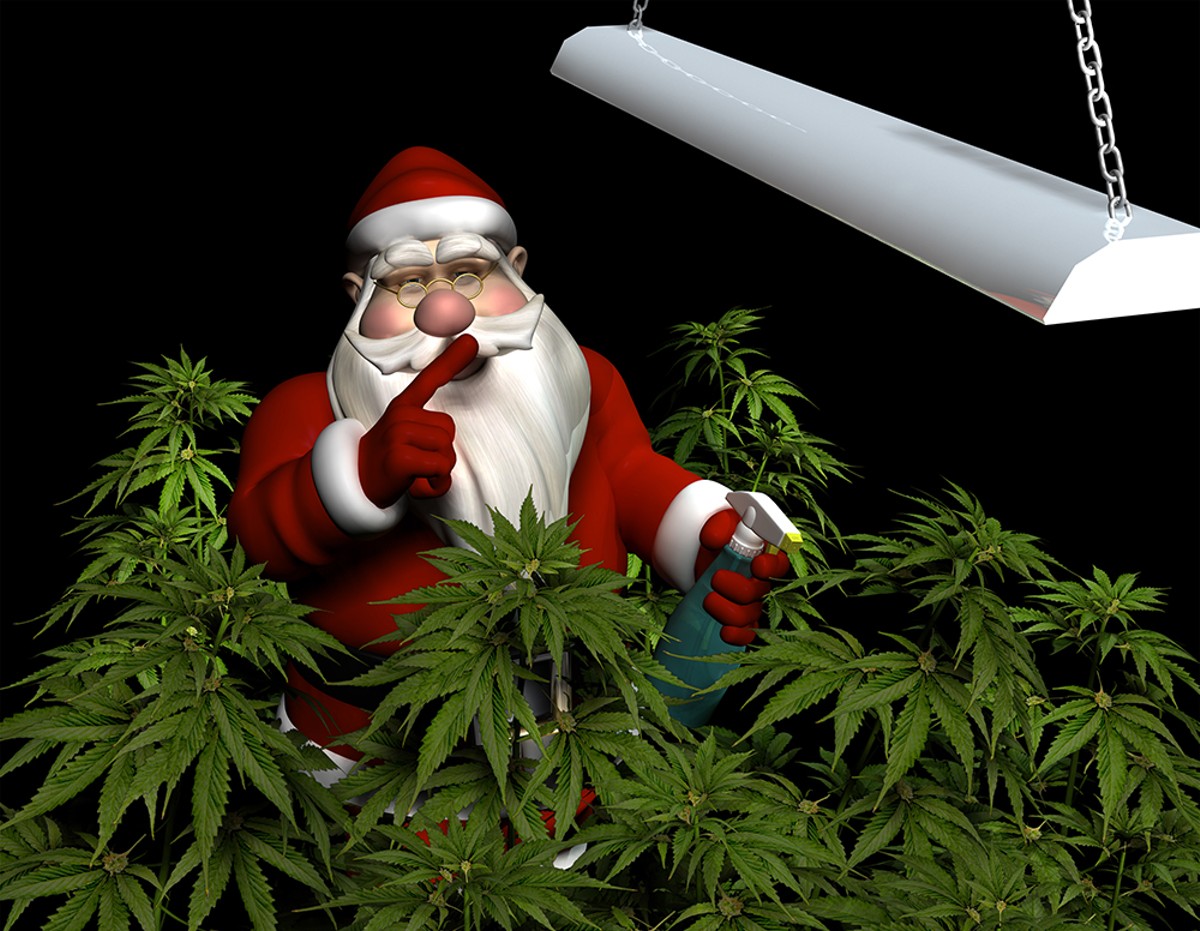 It's that time of year, so let's have some marijuana musings to entertain ourselves for the holidays.

Have Yourself a Marijuana Christmas

Now all your troubles will be out of sight

From now on your troubles will be far away

Santa has a bag of glee

Smoke your cousin's stash — it's OK

He smoked yours up last year

Make your grandma laugh and smile the day away

So have yourself a marijuana Christmas day

OK, enough of that. However, if you must, there are plenty of Christmas canna-songs to enjoy. There's "I'll Be Stoned for Christmas," "Weed in My Stocking," "Weed (All I Want for Christmas)," and "Oh Chronic Tree," to name a few. And if Christmas isn't exactly your thing, there's "Pot in the Latkes" and "The Chanukah Song." Nobody's on board yet with a pot song for Kwanzaa, but there is a great piece on "Kwanzaa's Seven Principles: Lessons for Marijuana Activists" piece online at cannabisnow.com.

It does seem like marijuana is the perfect little stocking stuffer. It's really good for last-minute gifting, too. We went through the gifting thing with marijuana about a year ago. Remember when it was legal but no one could sell it? Buy a T-shirt, get a "gift." That seems to have slid away from the headlines lately now that we have some recreational stores up and running. Pipes, papers, and other paraphernalia make good stocking stuffers, too.

It looks like a Seattle man took the idea of gifting over the top. Last week, police in Tennessee busted the guy with 84 pounds of marijuana wrapped as Christmas gifts. When apprehended with the goods, police asked him what he did for a living. "This," he said. Apparently he does marijuana for a living. He'll also be spending a lot more time in Tennessee than he intended.

It does seem like marijuana is the perfect little stocking stuffer. It’s really good for last-minute gifting, too.

Regarding the people you don't want to kiss: There's always stuff out there about how to handle a relative with whom you disagree during the holidays. Your uncle the rabid prohibitionist, or even someone crucially politically opposed to your passions. Don't come in with your arguments ready. Get high, chill, and eat. You got plenty of other times to yell at each other. And if that's the only time that you ever see that person each year, don't waste it arguing.

And if you're having edibles, practice some moderation — because you will crash out on the couch in the middle of gift-giving, and your family will make cracks about it for years to come. Plus you might want to stay up to catch a stoner movie as the day ends, though there are limited choices: A Very Harold and Kumar 3-D Christmas, The Night Before, and Friday After Next. Of course, you could put on the classic Reefer Madness just for the laughs.

Maybe you thought you'd get some buds with holiday-friendly names. I don't know what's available around here, but it sure would be nice to pull out some Sugar Plum Fairy, 3 Kings, or Hawaiian Snow for your friend over the holidays. But if you want to get to the crux of the matter with your strain, go straight for the birthday boy and get yourself some Jesus, the strain with a direct connection to the man upstairs.

One thing the Bible says is that Jesus loved kids. Well, marijuana makes you feel like a kid again. You can roll around on the floor, stare in wonder at magic tricks, or help them break a few toys (that thing was not built for your weight).

All too quickly, the holidays end with the new year. New Year's Eve is the biggest party night of the year, but there aren't any New Year's marijuana songs that I could find. So I just have to do my own parody:

What Are You Smoking New Year's Eve?

Making my plans for a happy party night

Got pre-rolls of Atomic Northern Lights

What are you smoking New Year's

Got some Midnight for when the big ball drops

I even got some canna lollipops

Getting real high on New Year's

No need to hide, there's no need to run

It's very comfy just to relax

We could do that instead of getting drunk

What are you smoking New Year's

There are still a lot of issues yet to be settled about marijuana as legalization is implemented. Right now, though, access is easier than at any time before. And that is something to appreciate. Happy holidays.