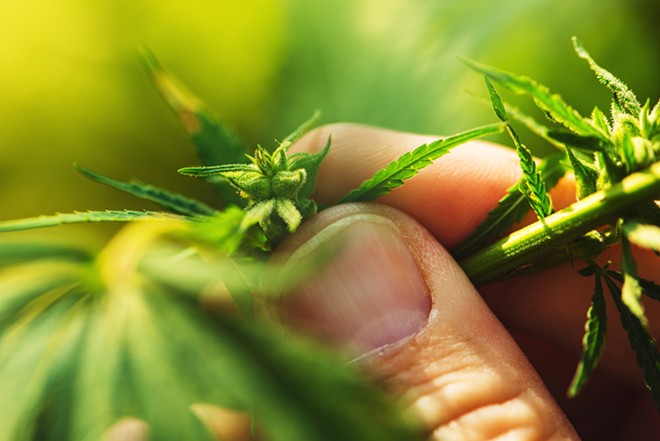 According to the new Leafly Cannabis Jobs Report 2020, there are 8,235 people employed in the legal Michigan marijuana industry. That's down from the previous year, according to Leafly, because "the bumpy implementation of a new regulatory system saw many formerly legal medical dispensaries drop into non-legal status. The first adult-use shops opened in late 2019, but significant parts of the state — we see you, Detroit — still await their first stores."

At least we got a shout-out regarding the city temporarily opting out of recreational sales. While the overall picture in Michigan looks better than what we see here in Detroit, economically things aren't nearly as rosy as they were a year ago.

"Right now, Michigan is really highly constrained in terms of access," says Leafly senior editor Bruce Barcott. "You guys had a tough year in terms of bringing people into the new license system."

Well, he doesn't have to tell us that. The report helps quantify what a "tough year" means in terms of jobs, and it allows comparison to what's going on in other places. It also measures some of the tangible impact from marijuana regulation.

The arguments for cannabis legalization include the benefits of jobs and tax revenue. The tax revenues in Michigan get reported out regularly by the state Marijuana Regulatory Agency. The jobs report is not their job — or anyone else's at this point. Most folks get their jobs numbers from federal sources, and right now the feds aren't paying much attention to the jobs aspect of marijuana.

As adult-use licenses proliferate, so should jobs. Jerry Millen, an owner of the Greenhouse in Walled Lake, says he currently employs 28 workers and will be adding 12 more when the store goes live with recreational sales on March 14. Stewart Carter from Utopia Gardens in Detroit says he employs 22 workers and would probably hire about 30 percent more if he had a recreational license.

So back to those big employment numbers. The report says that, nationally, there are 243,700 people with full-time-equivalent jobs in state legal cannabis businesses in 2020. The number is up 15 percent from last year and double what it was two years ago. Obviously, the job losses in Michigan over the past year didn't drive that growth. It was more places such as Illinois and Massachusetts that came online with legal sales that added the numbers. Michigan isn't even in the top 10 states for cannabis jobs. That list is headed up by California, with 39,804, followed by Colorado, with 34,705. Florida, which doesn't have recreational marijuana, has more industry jobs than Michigan. For the record, these jobs are not in the booming CBD market.

"The report does not include hemp-derived CBD that you could find online or at a drugstore," says Barcott. "That's not regulated under state cannabis laws."

The issue in Detroit is that City Council is trying to figure out a way to usher in social equity ownership for Detroiters. The Council press release announcing the extension of the city opt-out included the sentiment: "It's not enough for Detroit residents to simply hold security jobs or floor sweeping in this industry within our city."

So what are these jobs, and what do they pay? Barcott says that in the cannabis industry, "The range of pay is $15 per hour for budtenders starting out, to $70,000 to $80,000 a year for a store manager — or, in a larger company, the head of compliance or the head of human resources. Especially for companies that are gaining in size, there are all sorts of jobs that have nothing to do with touching the plant on the front line."

Simplyhired.com shows a store designer job in Lansing and a seed department grower job in Zeeland. There are jobs for paralegals, director of operations, receptionist-patient care consultant, graphic design specialist, and more across all the job sites and at all pay grades. Jobs in the marijuana industry are starting to look like any other kind of job, especially administrative positions. The employment opportunities are clearly showing up in Michigan, but the numbers for the state may not be as accurate as for a place such as Colorado where, "if you have a job that either touches or is near a plant, you have to have a state license to have that job," says Barcott.

Leafly's team uses whatever is available to help make a reasonable estimate — from financial reports to the number of certified medical patients. It's not that hard to find out how many facilities are licensed in Michigan.

Although Illinois’ 12.6 million residents beats our nearly 10 million, that doesn’t account for sales being five times higher. It’s the system Illinois put in place that made it happen.

The good news is that the more licenses granted by the MRA, the more jobs that come along with those licenses. And state licenses are being granted at a steady pace these days. That means a growth year for Michigan in 2020, where some of the legal jobs and lost revenue should be recovered. The expanding recreational market should lead to a quick change in direction.

Michigan's slow rollout of recreational sales resulted in a total of about $6.5 million in the first month. That included Christmas and whatever bump the holidays give to sales. Illinois totaled $40 million in sales for January, with a full-blown rollout on New Year's Day. Although Illinois' 12.6 million residents beats our nearly 10 million, that doesn't account for sales being five times higher. It's the system Illinois put in place that made it happen.

However, according to an analysis by investment publication The Motley Fool, Michigan's market has more long-term potential because Illinois has a cap on the number of retail outlets allowed, while Michigan does not. Our slow start could expand well beyond what Illinois has. That could start with a recoup of the near 8,000 legal jobs we lost last year and getting Detroit on track with retail sales.

Getting Detroit into the system could do a lot for the sales totals. People in the state's biggest market have to continue shopping in the black market or go to other cities for access. The city is holding its marijuana cards close to the vest as council members attempt to create social equity ownership for Detroiters. In the meantime it's delaying others from getting jobs that will be created simply by allowing retail businesses to open.