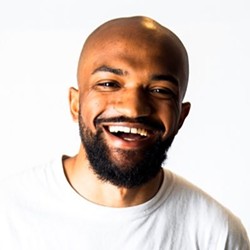 Gage Cannabis Co.
Diop Shumake.
Running while high doesn't sound that fun, mostly because to us the idea of running sounds like a nightmare. But the Michigan-based non-profit Runners High 5k has committed to spreading awareness about CBD's benefits for the mind and body — and they just received $50,000 to aid in their mission thanks to Gage Cannabis.

As part of the Michigan-based vertically integrated cannabis company's social equity grant program — which launched last year and awards 18 grants of up to $50,000, as well as additional marketing resources to forward-thinking cannabis-focused organizations — Gage revealed that Runners High 5k has been selected to receive some massive funding to continue exploring the benefits connected to fitness and cannabis use, specifically CBD. The reason? Gage views Runners High 5k as having the potential to become a staple in the cannabis community.

In addition to the grant program, Gage will also dedicate resources and funds to record expungement organizations and will host webinars and other networking sessions to connect organizations in the community with resources, workshops, and employment opportunities.

Last month, Gage Cannabis Co. in Ferndale expanded its services to recreational marijuana sales, more than a year after it first opened its doors to the public for medical marijuana patients.

Gage also operates retail stores in Adrian, Lansing, and Traverse City, as well as the Cookies store in Detroit. Aside from Ferndale, the company also offers adult-use sales at Adrian and Lansing.

According to a press release, the company anticipates operating more than 20 locations by the end of 2021.

For more information and application details for Gage's social equity grant program, visit GageUSA.com/se. Gage will host a webinar for interested applicants at 1 p.m. on Jan. 7.