Even though Detroit finally has a recreational marijuana ordinance, the fight is still far from over 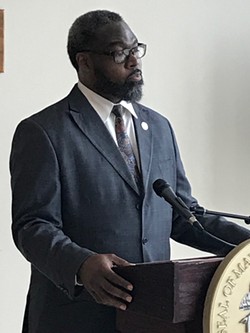 That's according to a timeline announced by the city Monday, Oct. 26 at a press conference presided over by council member James Tate and featuring Mayor Mike Duggan.

The rest of the information was full of intrigue for those already in or interested in getting into the marijuana business. To them it's HUGE — the city is opting in on all 10 categories of state recreational marijuana licensing. Detroit will allow 75 dispensary licenses, 35 designated consumption lounge licenses, and 35 microbusiness licenses. There are no caps on other categories, such as secure transporter or event organizer.

The intrigue comes in on who gets those licenses. The city has hewed closely to the idea of the social equity provisions of the state law. Tate cited the law's intention to help "communities that have been disproportionately impacted by marijuana prohibition." To this end "Legacy Detroiters" have a foot in the door.

The city had sought to provide financial sources to help social equity licensees get started, but so far none of that has materialized.

"COVID threw a big wrench into a lot of our plans to procure funding," says Tate, who spoke by telephone last week. "There are challenges with the federal government and the banking aspect. That is a challenge. There are some that like the idea and want to participate but don't want to be the first. That is still a target intention, the goal of a fund that will be created to buffer some of those costs."

What the city has done is offer city land bank properties in properly zoned locations to licensees at 25 percent of their commercial value, and "Legacy Detroiters" will pay only one percent of the city licensing costs.

This is where things get twisty, and lawsuits are sure to follow. When the state began accepting applications for recreational retail licenses it only took them from entities that already held medical marijuana licenses. That rule had to change in order for the Detroit social equity provisions to be legal.

Now there are a lot of medical marijuana license holders who expected to get recreational licenses and may already be prequalified by the state, but will now have to wait. They are reviewing their legal options.

Morris says he welcomes most of the proposed social equity provisions, but says that, "It's going to cause litigation; it's going to create a holdup."

Tate has anticipated the legal challenge and the ordinance says that if the provision that Detroiters hold majority ownership in at least 50 percent of retail recreational licenses is struck down, it strikes down the entire ordinance.

In other words, either Detroiters hold at least half the licenses or nobody is going to have a license.

On this point Tate was adamant, with a saying from his Alpha Phi Alpha fraternity: "We will fight until Hell freezes over, and then we will fight on the ice."

It's been a fight so far. At this point it is a proposal that is still up for discussion, public commentary, and approval by council. It's not over by any measure.