The delivery service went viral on TikTok for its pizzas with up to 1,200 mg of THC. We tried it. 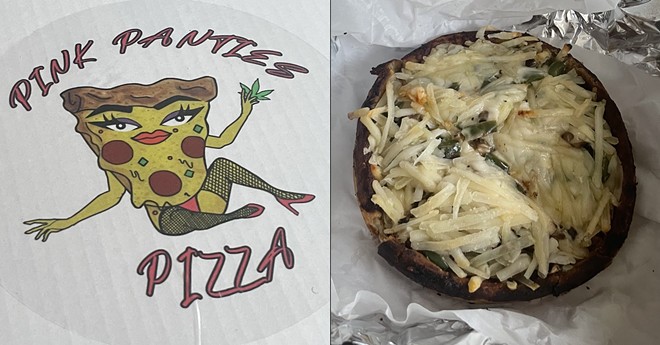 When I first heard about Pink Panties Pizza, a Detroit-based THC-infused pizza delivery service, I thought it was fake.

But it is, indeed, very real.

A delivery driver handed me a box with “warning, this pizza got weed in it… good weed...” written on it. A cartoon pizza on the box wearing panties, fishnet stockings, and heels smiled back at me.

That was after several back-and-forth text messages with the business that began with “what up dough,” and before I got so fried that I was stuck in a never-ending loop of “uhhhh” and couldn’t finish a coherent sentence.

Pink Panties Pizza is not necessarily a secret, but it does seem shady at first glance. Their website lists a menu, but you have to text them to order. 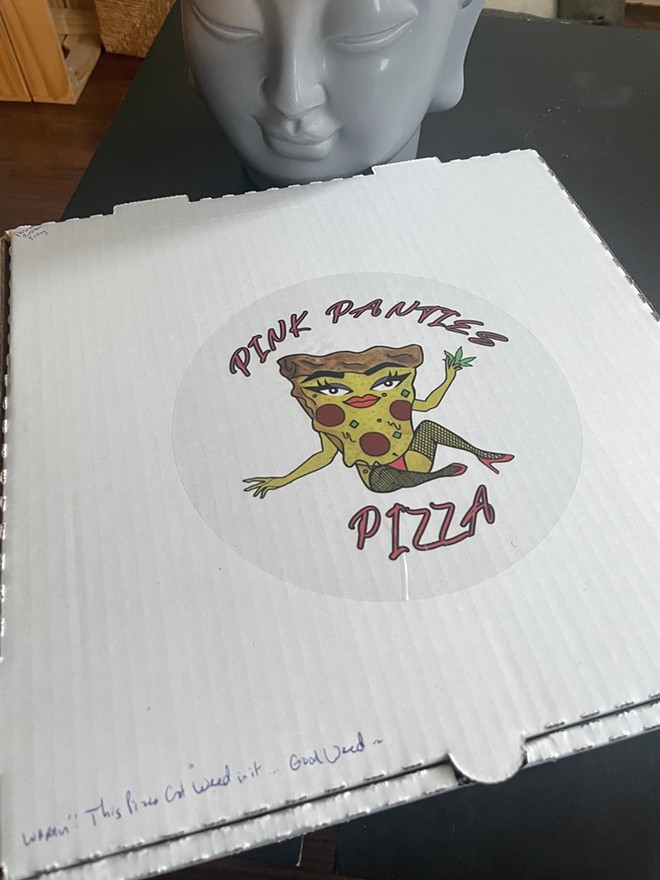 Randiah Camille Green
A Pink Panties Pizza box with a handwritten note reading, “warning, this pizza got weed in it… good weed...”

Somewhere out there is a video of me laughing to the point of tears because my cousin asked my cat if she liked paper, and then balled up a receipt for the cat to play with. It’s the type of nonsense that’s only hilarious when you’re that high.

Other outlets have reported that Pink Panties Pizza has locations in Ohio and Kentucky, but the owner tells Metro Times it’s a one-of-a-kind business only in Detroit. He chooses to remain anonymous, so we’ll just call him Jeff.

“It’s been a few articles published where they didn’t actually do their research or contact me,” Jeff says. “We get a lot of people that come here out of state for Pink Panties Pizza and we post on our social media where they are from, so that’s probably where the confusion came from. I’ve been trying to make us a Detroit thing. Like when people come to Detroit, they’ll be like ‘yeah I saw the Renaissance Center, I went to Belle Isle, and I got a Pink Panties Pizza.'”

The name is a nod to the strain of weed used in the pizza: pink panties.

When we text the number, we’re told “the menu is old so prices are slightly different.”

On the menu, a large specialty pizza was $40, but when we texted our order it was $85. That didn’t stop us. We ended up downsizing to a personal-size pizza with vegan cheese, mushrooms, and green peppers, which was $35 plus a $20 delivery fee.

Jeff, who is from Detroit’s east side, tells us specialty items like vegan cheese drive up the price, plus the cost of gas. Pink Panties Pizza is a small one-man operation, after all, and the ingredients are purchased per order rather than in bulk.

Jeff makes the pizza and delivers them in between working two jobs and being a full-time father.

“Every order is always fresh with ingredients from the supermarket or farmers market that day,” he says. “Plus the cost of food, just within the last four or five months, has gone up exponentially. My boxes, my stickers, all the time I have to put into it, the amount of THC… I’m getting oil changes almost every three weeks now to deliver orders. It’s just me by myself and I gotta make sure my son is good, so I’m not always able to fulfill every order.”

On average, Jeff says he delivers around 10 pizzas a week.

A large pizza with cheese and pepperoni generally starts at $40 for 500 mg of THC and delivery is $20 within city limits (it goes up for the suburbs). When he first started Pink Panties Pizza in 2017, pizzas were $30 and $10 for delivery, but that was five years ago. Blame it on inflation.

Besides being the most expensive pizza I’ve ever ordered in my life, it was surprisingly tasty. Vegan cheese can be hit or miss, but this pizza was cheesy with a crunchy crust, fresh toppings, and buttery dough. 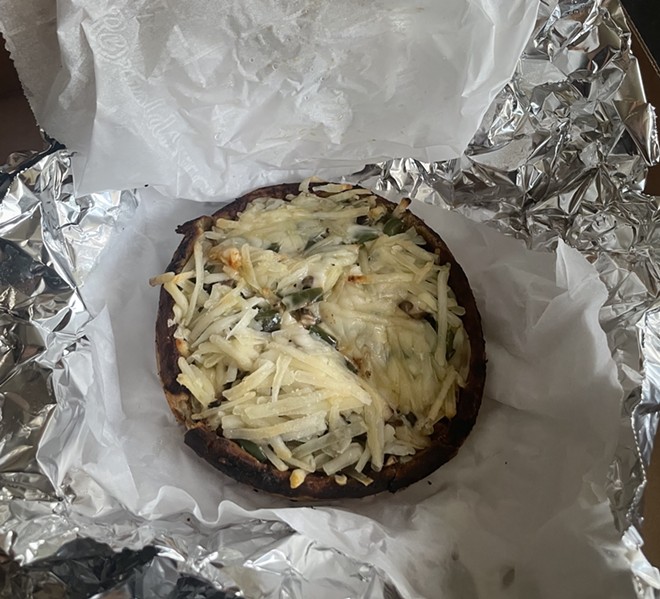 Randiah Camille Green
The personal-size pizza is small but still has a total of 500 mg of THC or roughly 125 mg per slice.
It was tempting to devour the whole thing, disregarding the ridiculously high amount of THC that would surely have sent me to the shadow realm.

The personal size has four slices which clock in around 125 mg each, so I stopped shy of half a slice. This was more than enough to give me a full body high that went from feel-good, to laughing so hard it hurts, to lights out. I was not eating more of that pizza, no matter how good it was or how strong my munchies got.

In hindsight, it makes more sense to order a large pizza since the whole pie is 500 mg regardless of the size. That way you can actually enjoy a full slice, which is what Jeff advises.

“I mean it also really depends on you and what you want to do,” he adds. “Some people wanna get that high. When we first started we only did 500 mg and I would deliver and people would be like, ‘Man, it wasn’t strong enough,’ so that’s when I came up with the different ‘boss up’ levels.”

If you’re thinking about ordering, there are a few things you should know. First, orders must be placed 24 hours in advance with a 50% deposit. Sometimes same-day orders are possible if you text Pink Panties in the morning for an evening delivery. It just depends on whether Jeff is available.

Payment is only accepted through CashApp or ApplePay.

When asked if the business is legal, he notes that they only deliver to people 21 and up, or 18 years old if they have a medical card.

The idea for weed-infused pizza came when Jeff was trying to find a legal way to help a friend who had just been released from prison make money. At the time, Jeff was managing a cannabis dispensary and thought he could buy weed from local growers, sell it through the dispensary, and give his friend the profit.

It all made sense until someone broke into his car and robbed him of the weed and the $5,000 his friend gave him to invest. From there he decided to make his own weed butter and sell edibles.

“But it was slow because [weed] brownies and cookies are everywhere,” he recalls. “So I wanted to come up with something different that I could make every day without getting bored.”

Though there were times when he would only sell one or two pizzas a month, Jeff says he never stopped. Then things started to take off last year after a customer video went viral on TikTok.

“I was working as a hotel supervisor and I kept getting notifications from people who wanted to inquire about the menu — like 300 requests a day,” he remembers. “I wasn’t even on TikTok at the time but my friends told me about the viral video so I found the girl who posted it and made her a brand ambassador. Now we do most of our business through social media or word of mouth. I’m still working two jobs, but the goal is to be able to do this full time when I can make enough to provide for my family.”

The company’s slogan is “pizza so good, you’ll want to eat the box.”

Wrapped in aluminum foil, the remnants of my Pink Panties Pizza sit in my fridge daring me to eat it. I’m saving it for a day where I have no plans and nowhere to be the next day, so as not to repeat my past mistake of eating it on a weeknight.

After living in Japan and traveling across Asia, Randiah Camille Green realized Detroit will always be home. And when she says Detroit, she's talking about the hood, not the suburbs. She has bylines in Planet Detroit News , Bridge Detroit , BLAC magazine, and Model D . Her favorite pastimes are meditating...
Read More about Randiah Camille Green
Scroll to read more Canna-Business articles