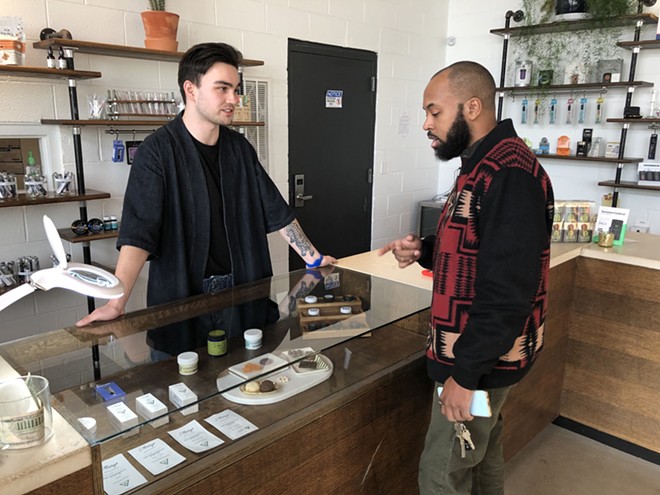 Lee DeVito
A budtender helps a customer at Detroit’s BotaniQ.

It's not official yet, but Detroit City Council member James Tate says that the city's opt-out on recreational marijuana will not end on March 31, the most recent date that had been set as the deadline. In fact, it could last through 2020.

"It's going to be extended," says Tate.

It's not clear how long that extension will be as working groups dig through what can and can't be done regarding social equity provisions for potential ownership.

"We still have a lot more work to do," says Tate. "It will certainly be done by the end of the year. I don't want to put a false date out there and not meet it but we should be able to have this done by August. We need to work without the pressure of an artificial timeline that we've been creating."

Tate says that revenues for a potential social equity fund have yet to be identified. There are working groups investigating what other cities have done, the legality of certain provisions, and even some blurring of the lines for what constitutes as a "Detroiter." For example, if you were a Detroiter for a long time during the war on drugs but no longer live in Detroit, should you still qualify for Detroit social equity provisions? Good luck figuring that one out.

Tate says the city is not playing games with these deadline extensions, but that they just want to get it right. It's clearly a logistical and legal can of worms as the city tries to reverse engineer a situation that developed during the medical marijuana-only stage of the industry. Ineptitude and foot-dragging at the state level contributed to the problem.

Now we're fully into the coronavirus pandemic, which will complicate things even further.

"With the coronavirus things are shutting down," says Tate. "We're trying to figure out how to continue governing, what that looks like. It's not like this is not a top priority, but there are a lot of competing aspects of things going on in life."