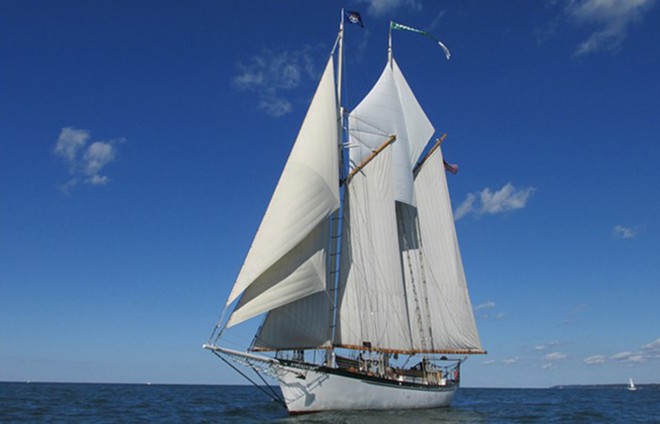 Detroit History Tours announced the return of its legendary boat tours on the eighty-five-foot-long tall schooner, the Appledore IV, following the cancelation of last year's boat season due to the COVID-19 pandemic.

The Appledore IV will sail from Bay City to the Port of Detroit on May 8, and tours are scheduled to go from May 13-30 and again in Sept. 10-27.

Detroit History Tours was founded in 2015 by Bailey Sisoy-Moore, providing fun and educational walking and bus tours throughout Detroit ever since. “In 2016 we brought the boat down from Bay City for what ended up being two weekends,” Sisoy-Moore says. “From that year to this year, we have added more weeks in Detroit each year.” The boat is owned and operated by nonprofit BaySail.

“On all of the tours, guests are welcome at the captain’s invitation, to BYOB,” Sisoy-Moore says. “Everyone can bring their own drinks and snacks, but we do ask no glass containers or bottles. In addition to that we provide Vernors, diet Vernors, bottled water, Better Made chips, and a homemade sailor’s dessert, which is an oatmeal hand pie.”

The History Under Sail tour, updated from the previous years’ experience, is a three-hour long tour jam packed with stories and the history of the Detroit River.

According to the tour website, “You will depart from the Port of Detroit and sail up the river and under the Ambassador Bridge as our award-winning guides share the stories of the city's skyscrapers, the wars for control of the river, and the secret hiding spots of mischief makers.”

Next on the list is the Great Lakes Ecology and Knot Tying tour, a new addition to the tours this year that is a three-hour sail down the river. “Together with your historian and ecologist you’ll learn the history of tall ships on Michigan waters and what’s swimming, slithering, crawling, and flying around the Detroit River,” the Detroit History Tours website says.

“The crew will do knot tying with the guests so they can learn some common sailor knots,” Sisoy-Moore says. “They are also going to help raise the sails and a few lucky guests will help steer the ship with the captain.”

Sisoy-Moore says Mariners Songs and Sea Shanties is by far the most popular tour being offered this year, featuring the award-winning musician Vadriel King during a three-hour sail.

Sisoy-Moore says the tour is, “An intimate experience, with only 30 guests on board, where the guests can open their bottle of wine or pop their beers and enjoy their snacks while they are regaled to the history of sea shanties and mariner songs.”

As some readers may know — well those of you who are TikTok users — sea shanties became very popular on the app during the COVID-19 pandemic.

“Have you ever had something that you were super nerdy about and thought you were the only one, and then you all of a sudden stumble into the fandom and you’re like, ‘Oh my god there’s other people?’ I feel like that’s what happened with sea shanties on TikTok,” Sisoy-Moore says.

Sisoy-Moore explains that although sea shanties have been around for a long time, they have certainly changed over the years.

“Sea shanties generally refer to hauling songs and what that means is when you’re raising a mast on a ship you do it to a rhythm,” Sisoy-Moore says. “A lot of sea shanties are rhythm songs and were a way for an entire crew to know the timing of the maneuvers for these large vessels. From those hauling songs came a variety of different songs like the ones we have on the Great Lakes. A lot of them originate with the early African American sailing songs. Their music then got mixed in with what had been heavily Irish, English, and Scottish sea shanties.”

Finally, there’s the Stargazing Sail, a two-hour sail from 10 p.m.-midnight, where guests spend an evening under the stars along the beautifully lit Detroit skyline.

“You’ll hear stories of smuggling, prohibition, and romance of Detroiters past, and learn to tie a ‘Lovers Knot,’” the website explains. “Whether you’re single, coupled, or spending an evening with friends, we hope you'll stay up late to join us for a midnight toast to the city that Marvin Gaye said, ‘turned out to be heaven’ beneath the heavens.”

“The tour also includes chocolate, because of course we should have Sander’s chocolate late at night under the stars,” Sisoy-Moore says.

The ship will be sanitized in between tours and all guests must comply with federal, state, and city COVID-19 restrictions in place at the time of their sailing, Sisoy-Moore says.

Tickets range from $72-$92 per person and can be purchased online at detroithistorytours.com, but tours are filling up quickly so Sisoy-Moore says to make sure to move fast. If you do miss this round of tours, Detroit History Tours and the Appledore IV will be back in September.