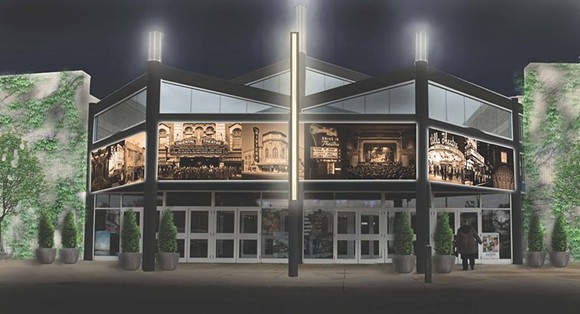 The swanky cinema will feature wall-to-wall screens in its auditoriums, state-of-the-art sound systems and film projection, high-backed rockers and VIP recliners. Doesn't sound like your typical cineplex, does it?

The Riviera Cinema will also feature a cocktail lounge with an "extended menu in addition to the usual concession fare."

The theater is owned by the Cloud Nine Theater Partners, LLC. The company also owns the Maple Theater in Bloomfield Township. In 2012 they revamped that theater to include a coffee shop, a full bar, new seats with more leg room, and larger, 3-D capable screens.

“Return to elegance in this grand new movie palace. Imagine yourself back in an era when movie-going was a special event. Now everything is new, sleek, and modern with the finest technology,” said Cloud Nine's Ruth Daniels in a release.

To celebrate the opening of the theater, a special charity event will be held on Wednesday, May 6. The event will feature a strolling supper, a signature cocktail, live music, movies, popcorn, and snacks and will benefit Jay's Juniors, National Council for Jewish Women, Oakland Early College, and Sweet Dreamzzz. Jay Towers will host. Cocktail attire is required.

Tickets for the event are $100 per person. The event starts at 6 p.m. The theater will be located at 30170 Grand River Ave., Farmington Hills.