Po' boys are popping up at this weekend's Gabriel Hall dinner 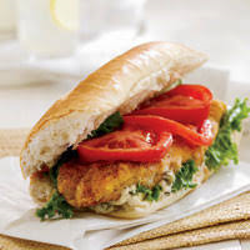 It's hard to find a good po' boy in Detroit. Even the city's very few chefs who trade in cajun/creole dishes don't have too much in the way of the New Orleans' signature sammies on their menus.

And that's a borderline crime. Fortunately, Dameon Gabriel and Ederique Goudia of Gabriel Hall are hosting a pop up on Sunday at North Corktown's Nancy Whiskey's with a menu that's only four items long, but is still a "don't miss."

Choose from the shredded chicken po' boy, fried catfish po' boy, and fried green tomatoes po' boy (fried green tomatoes, of course, are an even rarer treat in the deep north.) On the side, try the Voodoo Fries, which Gabriel says are dusted with GH's creative signature creole seasoning.

DJ Skeez, a longtime Detroit/New Orleans deejay, will provide the tunes. The music component is a big part of Gabriel Hall's longterm plans as the pair are building out a space for a creole restaurant/venue in the West Village. It's under construction, and will likely open in 2018.