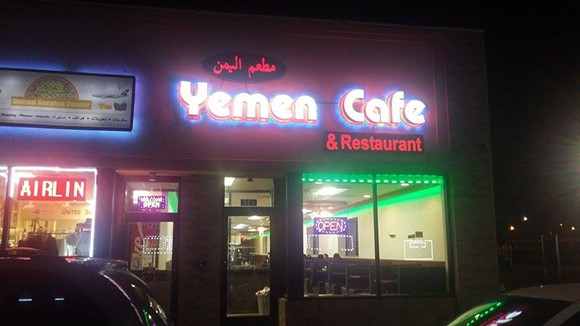 We've had our eye out for the move for the past couple of months or so, when we noticed a snazzier new store front donning the eatery's name directly across from its original location on Joseph Campau at Goodson in the town's south side. Over the weekend, we stopped in for our favorite, chicken gallaba, and got to check out the new digs. We were told the relocation had taken place about three weeks prior.

The most notable difference is, of course, is in the dining area. The spot's original dining room was far smaller and leaned toward strict utilitarian. With minimal décor, it basically had just enough booths for carryout customers to wait and a few guests to dine in. The new space is bright and spread out, with multi-colored accent lighting and tile flooring. There's a main dining area made up of four top tables and roomy booths. In the back is a more private area for larger parties and even seating with sheer curtains surrounding them for an even more intimate experience.

Another major improvement is the kitchen. It's still open, like the former kitchen, but it's much bigger. No longer are cooks and utensils crammed in a poorly-ventilated space in the rear of the restaurant. Now, the kitchen boasts brand-new equipment and it appears that back-of-the-house staff have their own stations from which to work.

The menu has also expanded. Still strongly influenced by Arab, Indian, and Turkish traditions that result in a flavor quite unique to most other Middle Eastern eateries, the offerings now include more typical dishes like shawarma sandwich wraps, stuffed grape leaves, and even a cheeseburger.

We were mostly impressed by the updates, though it seems evident that the operators will have to hire a few more front-of-the-house staff. We also are not sure about the additional menu items. Seems like they're trying to be a bit more like other Middle Eastern establishments, and what we like about Yemen Café is its uniqueness. Overall though, it appears the menu tweaks may be seen as necessary to draw in a bigger variety of customers. Either way, we're excited for future of this restaurant and look forward to see how they adjust in their new home.