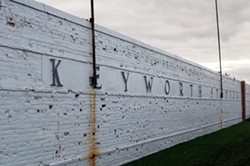 The owners of the Detroit City FC are gearing up for the first of five happy hours to raise funds for the development of Keyworth Stadium in Hamtramck.

To be held at Suzy's at 2942 Evaline St. on Monday, Nov. 30 Le Rouge fans will get a chance to learn the latest on the investment campaign from DCFC ownership. Thus far, Le Rouge has garnered more than 100 investor support. The club seeks to raise the necessary funding to rehabilitate the 79-year-old stadium.

You might recall that the Hamtramck School Board approved DCFC's Keyworth Stadium lease in September.

Under the agreement, Hamtramck Public Schools has set up a multi-year lease that will allow DCFC to use the stadium for up to 25 events per year. DCFC is expected to raise funds to rehab the facility, which will cost an estimated $750,000 to $1 million. The rehab work could start as early as October, and is expected to be completed in April 2016.