Would setting Kilpatrick free help or hurt Trump in Michigan? 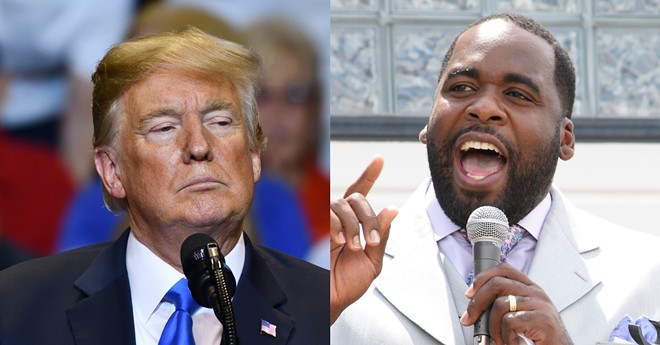 Local millionaire Peter Karmanos Jr. is using his power and influence to take up a personal cause — to try to get President Donald Trump to free former Detroit mayor Kwame Kilpatrick from a 28-year prison sentence.

The Compuware founder revealed on Charlie LeDuff's No BS News Hour podcast on Sunday that he has taken the matter into his own hands, personally forwarding a letter from Kilpatrick to Trump's son-in-law, Jared Kushner. He believes Trump is seriously considering the case.

#FreeKwame may seem to be an odd political position for Karmanos, who also told LeDuff he is a Trump supporter and has given most of his political contributions to Republicans, according to the Detroit Free Press. However, Karmanos also donated to Kilpatrick and his mother, both Democrats, and even gave Kilpatrick a job as a salesman in Dallas, Texas, after he resigned as mayor following the notorious text message scandal reported by the Free Press.

"I do know that if Trump gave him clemency before the election, where do you think he'd help Trump's campaign at?" Karmanos said. "You don't think he would go to the Black community?"

It's true that the Black Detroit vote would help Trump in a "yuge" way: Trump won Michigan by less than 11,000 votes, a razor-thin margin. And in 2016, Black voters were unimpressed by both main candidates. In Wayne County, Hillary Clinton got about 75,000 fewer votes in 2016 than Barack Obama did in 2012.

But it's hard to imagine that freeing Kilpatrick would sit well with Trump's white Michigan voters — even though Trump famously said that he "could stand in the middle of Fifth Avenue and shoot somebody and I wouldn’t lose any voters" and that polls show his base is indeed loyal.

Detroit has long been a punching bag for Republicans. The refrain that "Democrats ruined Detroit" is a common one from Republican pundits. (Let's ignore the fact that these guys would do well to read some Thomas Sugrue.) Kilpatrick served as mayor from 2002 to 2008 — just before Detroit became the largest municipality to declare bankruptcy. The level of cognitive dissonance necessary for a brain to hold both the idea that "Democrats ruined Detroit" and the idea that Trump did a good thing by setting perhaps Detroit's most infamous and corrupt Democratic mayor free would be off the charts.


The story of Baltimore is that of a FAILED CITY run into the ground by DEMOCRAT politicians and their FAILED LIBERAL POLICIES that spawned poverty, crime, urban decay and hatred of police. Democrats have destroyed many former great cities like DETROIT. https://t.co/KsFxmnijBe

A millionaire asking a corrupt billionaire to set a corrupt mayor free is likely not a message that will resonate with voters in 2020. Or at least it ought not to.

LeDuff is on the payroll of Deadline Detroit, which is primarily bankrolled by Karmanos and was the first outlet to report the news, where it repeated Karmanos' incendiary claim that Kilpatrick's ouster was "a modern-day lynching" in the headline. (Trump has been criticized for calling his impeachment "a lynching.") It was also the first outlet to publish Kilpatrick's letter to Trump, but it did not mention that it obtained it from Karmanos. Other media in Detroit followed suit, repeating Karmanos' "lynching" claim in their headlines.

Kilpatrick was convicted in 2013 on 24 counts of using his positions as mayor and state representative to carry out a decade-long criminal racket involving extortion, bribery, conspiracy, and fraud.

Barbara McQuade, the former U.S. Attorney for the Eastern District of Michigan and an Obama-appointee, has said that she believes the probe launched by the U.S. Attorney’s Office for the Southern District of New York into Trump's dealings resembles the investigation that McQuade and her team of prosecutors led that landed Kilpatrick behind bars.

McQuade ensnared Kilpatrick using the Racketeer Influenced and Corrupt Organizations Act, or RICO, a statute passed in 1970 that made it a crime for a mob boss to direct underlings to commit crimes.

According to The Detroit News, Kilpatrick isn't eligible for a pardon under the Justice Department's guidelines because he's still serving a prison sentence. He's also an unlikely candidate for commutation partly because such candidates have typically served at least half of their sentence.