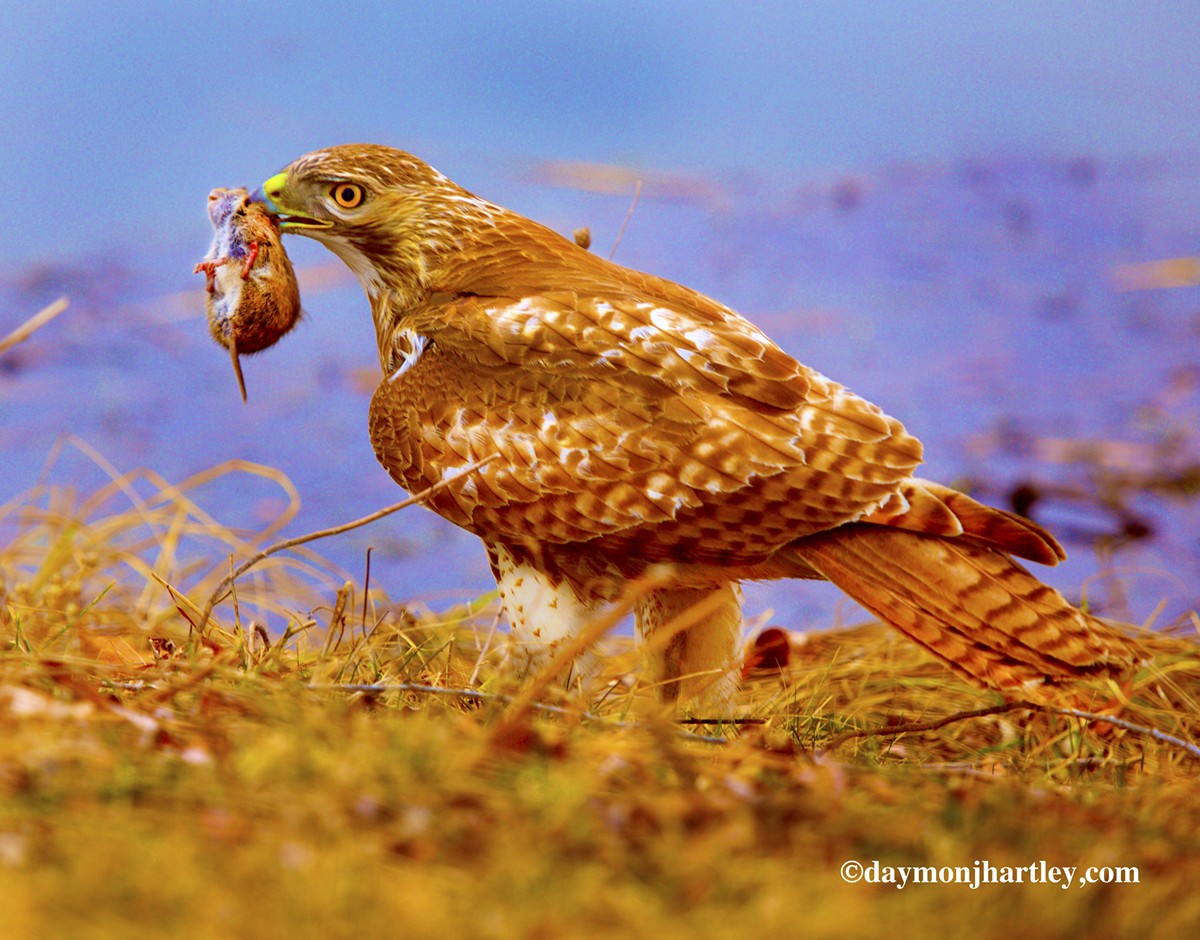 Like all large parks, Belle Isle is a place for many things, and different bits of programming and infrastructure express competing visions for what the park is and what it should be. The ongoing debate over the presence of the Detroit Belle Isle Grand Prix auto race on the island is a prime example of such conflicts, pitting racing enthusiasts against those who believe a park should provide a reprieve from the noisy world of the city.

For hundreds of thousands of migrating and nesting birds, the island park is something more vital still — a lynchpin in their struggle for survival. The island sanctuary is an important habitat in the midst of miles of concrete and attracts a number of birds, including shorebirds, waterfowl, owls, woodpeckers and songbirds. These birds either visit during their migrations — the Detroit River is situated at the confluence of the Mississippi and the Atlantic flyways — or raise their young here during the summer, taking advantage of the island's varied ecologies.

It's the kind of issue that race opponents and environmentalists want scientists to study. Michigan's Department of Natural Resources, which manages Belle Isle, is currently reviewing the future of the race on the island, and groups like Belle Isle Concern and Detroit Audubon are pushing for an independent, third-party review of the Grand Prix's environmental impact.

So far, the DNR has not committed to such a study. Without that, there's no telling what exactly the race means for countless birds, or in what other ways pollution and heavy use of the delicate 982-acre park could be detrimental. However, scientists we spoke with suspect there is cause for concern.

For their part, race supporters and even some environmentalists emphasize the perks for the city and the park, with Grand Prix organizers claiming between $45 and 50 million in economic benefit from the race. (It's worth noting, however, that they've never provided any evidence to support the claim, despite repeated requests from race opponents.) Organizers also note that the race runs at the beginning of June for three days, and therefore misses peak migration time. And the race occupies the western end of the island — not the more biodiverse eastern side.

As Orin Gelderloos, a professor of biology and environmental studies at the University of Michigan-Dearborn suggests, activists are perhaps using the environmental study as a "handle" to push their agenda of getting the race off the island to improve access and keep the park in alignment with what they feel are more appropriate uses for a park, like bicycling, walking, and birdwatching.

"The island is a park, and parks are not race tracks," Professor James Bull of Detroit Audubon says.

"If there were clear environmental damage from the Grand Prix I think we would be aware of that by now," David Howell from Friends of the Detroit River says, although even skeptics like him believe a review could provide useful data. However, it could also be that new research relating to the effects of noise on wildlife, as well as evidence-gathering, could give a better picture of how the Grand Prix actually affects creatures on the island.

Investigations of IndyCar races in cities like Montreal and Baltimore have pointed to the problems associated with unregulated vehicle emissions from souped-up race cars, chemical and particulate matter generated by shredded tires, and spills. (The Grand Prix did not answer requests for comment for this article.) But noise, on the other hand — with its ability to travel relatively long distances — could be environmentally significant, and the hardest thing to control.

A study of the now-defunct Grand Prix of Baltimore found that the race created noise pollution of around 118 decibels, "somewhere above 'chainsaw, rock concert' and just below 'ambulance siren,'" as an article in Baltimore Brew put it.

This data coincides with a spate of research examining the impact of noise, particularly from expressways, on birds. One study by Boise State researcher Jesse Barber broadcast the sounds of traffic into an isolated Idaho woodland to determine the effect of noise on bird health when it's divorced from other environmental factors like pollution. Barber and his team found that a third of bird species were driven away by the noise, and several species were significantly lighter for their size.

It's worth mentioning that such research comes against the backdrop of other studies that show significant declines in bird populations. The North American Bird Conservation Initiative issued a report in 2016 showing that roughly a third of North American birds were threatened with extinction. Possible reasons for this range from climate change to wind farms and habitat loss. One outcome of a study on Belle Isle could be to investigate if the race is impacting already-threatened species.

Closer to home, Professor Darren Proppe is doing a study of his own at Grand Rapids' Calvin College, evaluating the effects of anthropogenic noise on woodland birds. Proppe says he believes that the amount of noise pollution at the Grand Prix could affect communication, particularly among songbirds which are in decline across the country. It could also increase stress-levels and in turn compromise the survivability of nestlings, some of which are being born during the time of the race, and also possibly damage the birds' hearing.

Proppe stresses that there are a lot of unknowns here. For example, how noise affects bird hearing is not well understood. Also, most studies of noise pollution on birds have studied lower decibel noise pollution over longer periods of time, and in the case of expressways this means dealing with noise that maxes out at around 80 decibels. There is also the issue of the race running on the west side of the island, and the birds primarily nesting on the east side.

"I would say that much research on noise shows that noise reduces biodiversity," Proppe says. "As far as acoustic impacts go, studies have documented impacts out to a kilometer or so from noise sources. ... A lot of these sources they're looking at are loud, but maybe not 118 decibels-loud."

For those of us who don't speak metric, a kilometer is about .62 miles. The far eastern edge of the track runs close to Inselruhe Avenue, about .3 miles from the Belle Isle Athletic Shelter and the beginning of the wooded areas that make up some of the prime bird-habitat on Belle Isle — in other words, well within Proppe's one-kilometer range.

How much damage can 118 decibels do at this range over three days? We don't know. But it could have the effect of shrinking the already limited amount of bird habitat on the island.

There's also the issue of what's been done to the western side of the island. As a park, Belle Isle has always concentrated programmatic uses on the western side and left more natural areas to the east. Still, the Grand Prix has amplified this by adding an additional nine acres of concrete to the island and tearing down trees (some of which were planted as a memorial to victims of youth violence by an organization called Save Our Sons and Daughters, or SOSAD — perhaps not the best advertisement for a major sporting event).

Moreover, any tree cover could be valuable in a place like Detroit. "You're talking about the Detroit urban landscape, where forests are almost entirely lacking," says Caleb Putnam, who works with both the National Audubon Society and the Department of Natural Resources. He adds that the area attracts "hundreds of thousands of birds" each spring and fall. "Forest is one of the limiting habitats and Belle Isle is one of the spots that has quite a bit of it," he says.

Even the trees that were removed from the race's side of the island could have been important for migrating birds, many of which are forced to come down from their nightly flights wherever they happen to find themselves and make do with the habitat that is available.

Putnam emphasizes that none of the speculation about noise or habitat proves that the race is harmful — only that it demands further investigation. "There's a lot of uncertainty here," he says. "We are not activists; we are scientists, and we would want to go on what the data says. And there isn't a lot of data."

But Bull makes the argument for an environmental review a different way. "Those that want to continue to do something like this should be responsible, it should be on them to show us that it's safe," he says. "We are not the ones proposing something pretty extraordinary for a park."