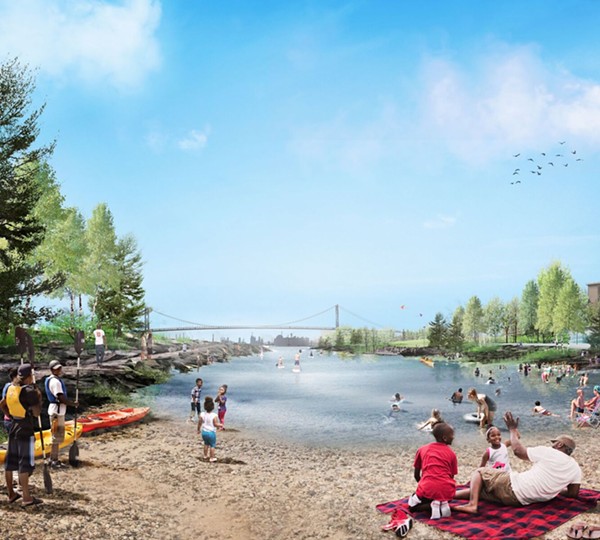 In five years' time, Detroiters are expected to have a new beachy cove from which to dip in the Detroit River on a hot summer's day (or on which to ice skate during the roughly 6 months of the year when that's feasible).

The inlet will exist along the Detroit River just west of downtown, as part of a proposed design for a planned 22-acre park. The firm behind the design, New York-based Michael Van Valkenburgh Associates, was today announced the winner of a competition for who would map out the park. The nonprofit Detroit RiverFront Conservancy has said it will raise $50 million to facilitate the project. 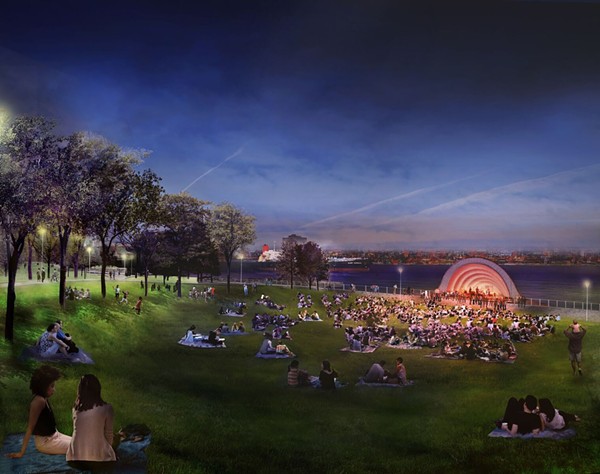 Michael Van Valkenburgh Associates was selected over three other acclaimed architectural firms from around the country following a weeks-long public input period. Though the firm's design is not final, it envisions the carved out beach, a small island just off the water, and a stage and "performance hill" where people can watch concerts. The hill is just one of the places where the firm has suggested stacking earth to diversify the riverfront's flat landscape.

Michael Van Valkenburgh is the landscape architect behind parks including Maggie Daley in Chicago and Brooklyn Bridge in New York. He's currently working on landscaping plans for the Barack Obama Presidential Center in Chicago.

Van Valkenburgh sounds like a straight up visionary when it comes to public space. Since his proposal for West Riverfront Park was first unveiled in February, he's uttered gems including, "A great park is a like a meal where everybody finds something to eat," and "Building a park is the ultimate act of democracy."

That "ultimate act of democracy" reportedly managed to eke its way out of the development-friendly Duggan administration thanks in part to planning director Maurice Cox, whose department decided to devote the land to recreation rather than fancy high-rises. The land was once home to an old Detroit Free Press printing plant.