We are all in mortal danger 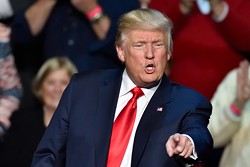 “I’m not trying to suck my own cock.” - Anthony Scaramucci, White House communications director, his second day on a job which lasted barely a week.

Time to stop pretending that this — any of this — is normal. That headline is not clickbait, but an acknowledgment of what anyone paying attention knows: The current President of the United States is dangerously erratic, failing to govern in anything that resembles a responsible way, and flirting with taking the country, and quite possibly the world, off the cliff.

None of that is an exaggeration. Donald Trump has been lurching around, unable to articulate anything like coherent policy, let alone accomplish one.

Instead, what he does is create perpetual chaos. In the nation, in the world, and most bizarrely, within his own administration. Who could have imagined that the thuggish Sean Spicer would quit after six months because Trump hired someone much worse as his boss?

But he did indeed, and Spicer was right to do so. Moments after Spicer was out the door, Anthony Scaramucci, the most vulgar creature of them all, a bad caricature out of The Wolf of Wall Street, was taking aim at Reince Priebus, the hapless White House chief of staff.

"Reince is a fucking paranoid schizophrenic," the communications director said — to a writer for the New Yorker and CNN, Ryan Lizza. When Trump didn't fire Mooch immediately after that, or at least denounce what he said, old Rancid Pubes should have quit on the spot.

But Priebus had his balls removed a long time ago. Even after he was publicly humiliated by having his replacement announced in a tweet, he whined and, like a whipped beagle, licked his master's hand on his way out, thanking Trump for the "opportunity and blessing" of serving him. Later, we learned that to humiliate Priebus during one top-level meeting, Trump ordered him to stop whatever he was doing and kill a fly.

Incidentally, Scaramucci's wife Deidre had a much more sensible reaction to her husband's joining Team Trump. She announced she was divorcing him.

Trump, who like any would-be banana republic dictator loves military brass, replaced his old chief of staff with U.S. Marine Corps General John Kelly, who has been serving as secretary of Homeland Security.

Mooch, of course, was fired 10 days after he started, having essentially given up his career and missing the birth of his son to serve Moloch.

By the way, in April Boston Globe columnist Michael Cohen called Kelly "the scariest" Trump cabinet member, and noted he often sounded "unhinged," as when he claimed, as he often does "we are under attack every single day. The threats are relentless."

Sensibly, the columnist noted, "No, we're not."

However, the Trump administration, and the nation itself, are under relentless attack. From Donald Trump.

No other president has attacked his own cabinet members and tried to force his own attorney general to resign, less than six months after he was appointed.

No other president has ever done anything as crazy as announce what would amount to a major policy change — the one banning transgender people from service — via Twitter, without even consulting the military force.

Yes, I know Twitter has only been around a few years, but try to imagine Abraham Lincoln ignoring the cabinet and scrawling, "Gonna free the slaves! Biggest change ever!" on a barn in the middle of the night.

Actually, as I write this, Trump has yet to issue any kind of coherent transgender policy directive, so we don't know to what extent he meant it.

There's no doubt Trump is utterly incompetent when it comes to actually making policy or getting Congress to enact it. The health care fiasco proved that.

Nor does he want, or is he even willing, to have competent people to do the job in his place, something at which Ronald Reagan was a master.

The Priebus-Scaramucci mess, a New York Times analysis rightly observed, offers a case study in how the Trump White House operates, a conflict "divorced from facts, untethered from the basics of how government works, enabled by the lack of any organizational structure, and driven by ambition, fear, animosity, and envy."

That's about it. Everything the presidency and our government stood for is being systematically trashed.

What's crazy is that anybody with a brain would go to work for Trump; the odds are that within months at best, they too will be savaged and destroyed by their boss.

Keeping this freak show going is far more dangerous than we know. North Korea has nuclear weapons, and is openly baiting us. Do you trust Trump to handle this in a measured and wise way? What will he do when the economy turns down, when people who once supported him now start booing him?

We know he lashes out to try and create distractions whenever he suffers a setback elsewhere.

Trump is, on top of all this, an accidental president, rejected by 54 percent of the voters, a man who came to power because of a fluke in the Electoral College.

Mike Pence is a narrow, little, right-wing religious nut, a man with bad policies, but one who seems, on the surface, sane. We've survived leaders like him before.

We may well not be able to survive four years of the current maniac. The congressional leadership knows this best of all, and needs to do something to get him out.

We, and rational government, deserve to survive.

One more great one from our governor: One of the few really good things Jennifer Granholm did as governor was the Michigan film incentives program, which gave tax breaks to Hollywood when they chose to make movies in Michigan.

This created jobs, and perhaps just as important, excitement, at a time when there was precious little in Michigan. What could be cooler than seeing Brad Pitt in your grocery store or Jack Nicholson in a restaurant?

But Rick Snyder killed the program when he became governor. When I asked him about that, he said he didn't think "state government should be in the business of playing favorites (and) picking winners and losers."

So a potential new industry went away. Cities like Allen Park, which had invested in a major movie studio, were damn near ruined. That was then and this is now, however.

Last month, Snyder decided it was time to play favorites and pick winners and losers. He begged the legislature to create a new incentive that would allow certain employers to keep some of their serfs — whoops, employees' — state income taxes.

The lawmakers were dubious, but the Snyder administration hinted strongly that if they did this, the Taiwanese electronics giant Foxconn would come here and create thousands of jobs. That was even too much for some Republicans, one of whom, State Rep. Martin Howrylak of Troy, said it was a case of "taking away from the poor and middle income and giving it to a select corporate class."

But the lawmakers did it anyway, and Foxconn turned out to be just that — a con. Soon, they announced they were going to take their jobs to Wisconsin instead.

'Detroit' can't heal Detroit: If Detroiters don't like a movie titled 'Detroit,' then who will?

"We originally located it in Detroit but the tax-credit program had just been disbanded, so we went to Massachusetts, to Boston, and shot the movie there," she said.