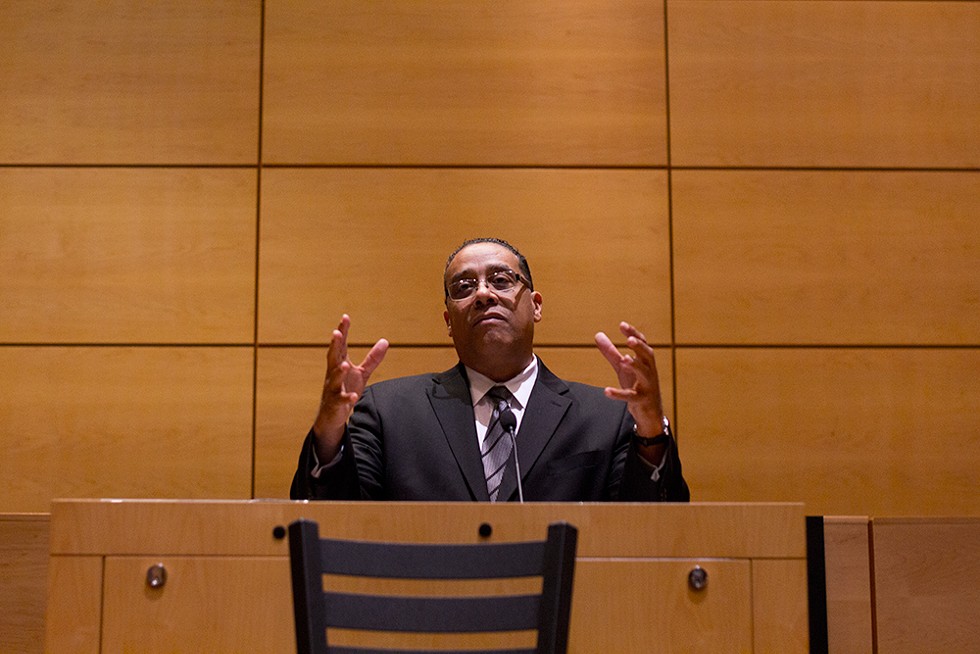 In the past six years, Wayne County Sheriff Benny Napoleon spent hundreds of thousands of dollars from his campaign account on upscale restaurants, flights, hotel stays, golf outings, taxis, home decor, sporting and concert tickets, and even a massage parlor in Sacramento, California and a strip club in Chicago, according to a Metro Times review of hundreds of pages of campaign finance records.

Intentionally violating the Michigan Campaign Finance Act is punishable by up to 90 days in jail, and in some cases, five years in prison. Elected leaders can also be prohibited from running for future office.

Since 2016, Napoleon has received a whopping $525,000 in political donations, far more than every local official aside from Mayor Mike Duggan. Running for a third full term, Napoleon easily beat opponents Charles Corley II and T.P. Nykoriak, getting 80% of the vote in the primary election last week. Without a strong opponent, Napoleon has spent a small fraction of his donations on campaigning, choosing instead to use the money on what he calls "work-related" restaurant visits, sporting events, and travel. He's running unopposed in the general election on Nov. 2, 2020.

In the past six years, the sheriff's campaign has spent more than $63,000 on hundreds of restaurant tabs, $65,000 on hotels, $29,000 on flights, $6,100 on Uber rides, and nearly $10,000 on car rentals. In an interview with Metro Times, Napoleon defended his campaign spending, saying it's better to use donors' money than tax dollars.

"Everything I have done in that account has been reviewed by my lawyer and my CPA," Napoleon says. "Everything on there is work-related or campaign-related."

Napoleon's use of campaign donations is so unusual that he spent more on meals and traveling than Duggan and every sheriff, commissioner, and executive in Oakland, Macomb, and Wayne counties combined.

"Living the high life with campaign funds is, sadly, nothing new to Michigan politics," Schuster tells Metro Times. "But if these expenses weren't explicitly for campaign purposes — and they certainly don't seem to have been — this is some of the most egregious misuse I've personally seen."

Here are some unusual expenses we found on Napoleon's campaign finance reports:

Asked about the gym membership, Napoleon responded, "Don't I need to be in shape and stay healthy?"

Napoleon also defended his use of campaign funds for golf.

"If I asked people or if people invited me to play golf ... I pay my way," Napoleon says. "It may offend some, but so be it."

Napoleon says the tickets to sporting events are work-related because he has to show his support for local teams.

The sheriff's campaign also spent tens of thousands of dollars on sports and entertainment. Since 2016, Napoleon has spent $999 on Indiana Pacers basketball tickets, $266 on Lakeland Tigers tickets, $635 at the Fox Theatre, more than $1,000 at golf courses, $338 at Comerica Park, $584 on Red Wings tickets, $68 at the Garden Theater, $1,048 on Ticketmaster, and $650 at Palace Sports and Entertainment in Auburn Hills, where the Detroit Pistons used to play. He also charged his campaign nine times for Detroit Lions tickets, totaling more than $27,000. In 2016, he spent nearly $9,000 on Lions tickets.

Napoleon says the tickets to sporting events are work-related because he has to show his support for local teams.

"They are in Wayne County, and they are sports teams, and I support them," Napoleon says. "I need to be seen supporting the sports teams in the county."

Despite the questionable campaign expenses, neither the Secretary of State Office (SOS) nor the Wayne County Clerk's Office — both of which are responsible for enforcing the Michigan Campaign Finance Act — has raised an issue with them.

SOS spokeswoman Tracy Williams directed Metro Times' questions about the expenses to the county clerk, whose spokeswoman says the law is too vague to discern "what are prohibited and acceptable expenses."

"The State of Michigan doesn't provide detailed guidelines, regarding expenditures for the office holders and their constituents," spokeswoman Lisa Williams tells Metro Times in an email.

"The lack of oversight of these filings is equally disturbing," Schuster says. "Politicians rarely have to justify lavish spending, and this just underscores county authorities' limited ability to adequately police campaign spending with the resources at hand. Without proper scrutiny, everyday people can't know whether they're funding a politician's re-election or their next vacation unless journalists step in."

Napoleon says he travels a lot for law enforcement conferences, social justice forums, and events for the Democratic Party. He said his staff also travels on donors' dime.

In April 2015, Napoleon's campaign racked up $842 for meals at six restaurant visits in Kissimmee and $159 at Providence Golf Club in Davenport, Florida.

Less than a month later, his campaign spent $1,153 at the Signature Front, a luxury hotel on the Las Vegas Strip, and $291 at two steakhouses and $87 on two Hooters visits. Less than two weeks later, campaign records show a $215 expense at the Country Club at Champion in Orlando. That summer, his campaign paid for visits to Washington, D.C., Baltimore, Fairborn, Philadelphia, San Antonio, and the Gold Strike Casino Resort in Robinsonville.

In April 2017, Napoleon charged his campaign $1,132 at Global Resort Homes in Kissimmee, Florida, which rents vacation homes and condos near Walt Disney World.

Just a few weeks later, in June 2017, campaign finance records show at least a 10-day stay in Reno, with bills that include $2,542 at Atlantis Casino Resort and $400 at Peppermill Resort Spa Casino. During a four-day stay in Washington, D.C., in September 2017, Napoleon's campaign funds paid more than $3,000 for a stay at the elegant Grand Hyatt in the Penn Quarter. While there, meals included $234 at Ocean Prime, $164 at Del Frisco's Double Eagle Steakhouse, $131 at Fig & Olive, $90 Old Ebbitt Grill, and, for good measure, $31 at Hooters.

In 2018, Napoleon spent more than $33,000 of his campaign funds while traveling — the highest annual figure over the past six years.

At the upscale Hyatt Regency in downtown San Francisco, Napoleon spent $3,934 in April 2018. Two months later in New Orleans, his campaign spent $4,769 for stays at the Hyatt Regency and the Marriott, a four-star hotel along the city's famed Canal Street.

On Christmas in 2019, Napoleon's campaign spent $1,997 at the swanky Hyatt Regency along the ocean in San Diego, with views of the downtown skyline.

In February 2020, as threats of the coronavirus began to limit Americans' travel, Napoleon's campaign spent $1,408 at Hyatt Place in the heart of Washington, D.C. Meals included $292 at the District Chophouse, $197 at Del Frisco's Double Eagle Steakhouse, and $237 at the upscale Bobby Van's Steakhouse.

Less than a week later, his campaign paid $887 for the Marriott Hotel.

And on April 9, as COVID-19 cases were increasing at an alarming rate, his campaign spent $1,853 at the Residence Inn in Washington, D.C.

When Napoleon wasn't traveling, campaign records reveal he also has an appetite for eating out at local restaurants. A vast majority of his 653 restaurant tabs were in metro Detroit, where he preferred upscale dining. Of those, three exceeded $1,000, 23 were over $250, and 164 topped $100.

One of his favorites is Italian food. Napoleon used campaign funds for 18 visits to Andiamo's for a total of more than $1,800. At Mario's in Midtown, his campaign spent more than $2,000 on 20 visits. And he spent $163 on one trip to Olive Garden in Livonia.

Another favorite of Napoleon's is Benihana in Dearborn, where his campaign paid $913 for six visits.

On March 14, 2017, Napoleon used his campaign funds to eat at four restaurants.

Napoleon says he conducts business over lunch and dinner and won't accept a free meal.

But Napoleon is taking something — donations.

Napoleon is able to spend so much money because he receives a lot of political donations, far more than any county official in Michigan, according to a review of campaign finance reports. Since 2017, Napoleon has received about $525,000 in political donations. Only a small fraction of that money is spent on campaign expenses, such as flyers, consultants, yard signs, and radio and TV ads.

Some of Napoleon's biggest donors are lawyers, consultants, labor unions, and towing company owner Gasper Fiore, who was convicted of bribing local officials in 2017, and executives whose companies have contracts with the county.

In March, former U.S. Rep. Duncan Hunter, R-California, was sentenced to 11 months of prison for using $250,000 in campaign funds to finance his and his wife's expensive lifestyle.

By Metro Times's estimation, Napoleon has arguably racked up more than $250,000 in non-campaign-related expenses.