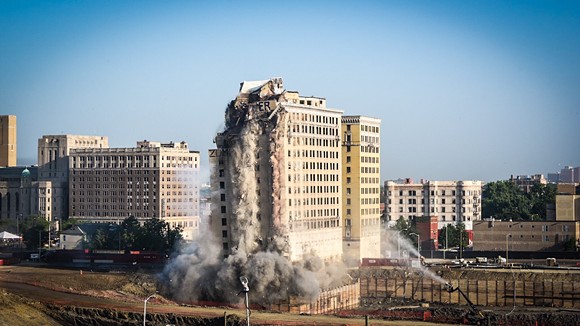 Cecily Ward
Many Detroiters might have experienced an unusual wake up call Saturday, when crews imploded Detroit's historic Park Avenue Hotel around 8 a.m. The hotel, abandoned in 2003, was demolished to make way for the new Red Wings arena project. In recent years, it was known for its cryptic "Zombieland" graffiti.

The 250-room hotel originally opened in 1924 as a ritzy addition to businessman Lew Tuller's hotel empire. In 1957, the Salvation Army took over and converted it to a senior housing complex. Learn more about the building's history here.

Watch video of the implosion below, courtesy of photographer Cecily Ward: