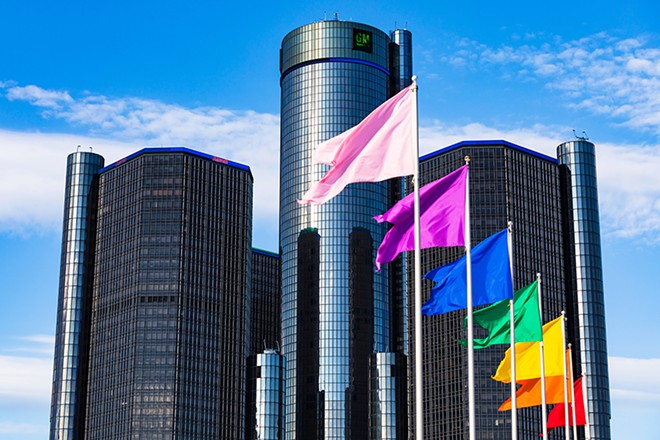 After a police officer murdered George Floyd, an unarmed Black man, in Minneapolis on May 25, 2020, sparking protests against police brutality across the country, companies nationwide began issuing statements and policies advocating for racial justice.

General Motors, for example, published a statement last year on Juneteenth—a holiday that commemorates the emancipation of Black individuals enslaved in the United States—saying that it publicly condemns “police brutality, racism, bigotry, discrimination, intolerance, and intimdation.” The company too said it would donate millions of dollars to fight “social injustices until the issues are fully unrooted within our society.”

However, General Motors’ contributions totaling hundreds of thousands of dollars to the Republican State Leadership Committee (RSLC), a national political organization dedicated to electing Republicans to state offices throughout the United States, in the 2018 and 2020 election cycles have not supported racial justice efforts. Instead, that money is helping to fund Republican lawmakers pushing for voter restrictions that will disproportionately disenfranchise Black Michiganders, according to new research from the Center for Political Accountability (CPA). The CPA is a Washington, D.C.-based nonprofit that aims to increase transparency and oversight around companies’ political spending.

And it’s not just General Motors, which did not respond to a request for comment for this article, that is doing so, the CPA said. Seventy-one other well-known public companies and trade associations that have publicly endorsed racial justice efforts made significant financial contributions in the 2018 and 2020 election cycles to the RSLC, which in turn spent about $1.5 million helping to elect Michigan lawmakers who have introduced bills or will vote on legislation that would restrict voting.

“We’re talking about corporate contributions that helped elect the legislators driving the effort and supporting the effort to restrict voting, limit voting, and change election outcomes,” CPA President Bruce Freed said. “This creates risk for companies today. You not only have investors but consumers who will change their buying patterns as a result of this. It has a reputational impact on a company, and it has an impact on company employee morale.”

Since 2018, the CPA has been closely following companies’ political contributions and how, or if, those have aligned with companies’ values statements. The group’s most recent research around corporate spending will be published in a forthcoming report, “Corporate Enablers: Who are Leading Bankrollers of Voter Suppression Legislation?” All of the contributions the CPA looked at in the 2018 and 2020 election cycles were from companies’ treasury funds, not employee-funded company political action committees, which means corporate officers made decisions about where to give company money. This, Freed said, translates to company officers being able to change their giving patterns if they realize what their funds are being used for, or if there’s enough public backlash surrounding the companies aiding voter suppression efforts.

“Companies’ political spending can lead to serious criticism, serious blowback, including an impact on their bottom line,” Freed said. “Companies today will have values statements, detailed statements about diversity and being a good corporate citizen. I think corporations are finding they need to put their money where their mouth is.”

Corporations have been far more financially supportive of Republicans than Democrats for decades in return for business-friendly policies, such as reduced corporate rates and regulations, and Freed noted that despite recent tensions between some corporations and conservatives over issues like racial justice and LGBTQIA+ rights in recent years, they continue to financially back the RSLC more than the Democratic counterpart, the Democratic Legislative Campaign Committee (DLCC). Carlos Holguin, a research associate at the Center for Political Accountability, noted that publicly traded companies are the dominant source of donations for the RSLC.

In 2018, publicly traded companies gave $18,659,714 to the RSLC, or 42% of the total donations to the organization that year. Those donations totaled more than any other group, including trade associations, political action committees and individuals. That same year, the DLCC received $6,088,920 from public companies, which amounted to just under 19% of its total donations. During the 2020 election cycle, public companies’ donations to the RSLC very slightly increased to $18,733,285, though that amount represented a decrease in percentage, dropping to about 32% of the RSLC’s total donations. Individual contributions to the RSLC more than doubled from 2018 to 2020, increasing from $6,172,139 in 2018 to $14,206,049 in 2020.

Meanwhile, public companies’ financial backing of the DLCC in 2020 increased to $9,541,305, or about 21% of the group’s total donations. Individuals made up the largest source of donations for the DLCC in both 2018 and 2020.

While these numbers are rooted in a national history of businesses’ support for conservative policies that tend to favor large corporations, the story is beginning to change, Freed said. The public is increasingly aware of, and scrutinizing, the impact of corporations’ donations, and company leadership is expanding their understanding of their financial support, according to Freed. Instead of giving to Republicans because that is what has always been done, companies are beginning to look at how their dollars translate to policy outside of something like tax cuts, including policies around racial justice and voting rights, Freed said.

“Companies have traditionally been Republican, culturally and politically,” Freed said. “Companies were not paying as great attention to the broader impact of their contributions, but the issue has become much sharper for the 2020 election because of the murder of George Floyd, the focus on racial justice, the insurrectionary attack on the Capitol, and the refusal to accept the outcome of the election.”

Companies, Freed said, have begun to see support for racial justice and voting rights as being in their self interest.

“There’s a bottom line threat; you see voters as consumers are reacting to this and changing their buying patterns,” Freed said.

The money provided by these companies to the RSLC flowed into four Chatfield Majority Funds, leadership political action committees that are associated with former Republican House Speaker Lee Chatfeld and are key funders of Republican candidates in Michigan. Freed noted that these four funds are able to exploit a grey area in campaign finance law that allows them to circumvent the state’s $41,975 campaign contribution limit. The RSLC funds also went to the Michigan Republican Party and the Michigan Senate Republican Campaign Committee.

“In many cases, companies will give to the Republican State Leadership Committee and not really pay attention to the impact of that contribution,” Freed said. “Companies face serious risks because of the public reaction when they see who enabled, facilitated and helped elect legislatures that are considering and passing voting restrictions.”

For example, from company donations given to the RSLC during the 2020 election cycle, $212,500 went to the original Chatfield Majority Fund. About $10,000 of that then went to Rep. Julie Calley (R-Portland), who this year sponsored House Bill 4128 — legislation that the New York City-based Brennan Center for Justice, a public policy institute, said would result in the purging of registered people from voter rolls.

The bill would require Michigan’s secretary of state to send a notice to registered voters who have not voted since 2000 that they will have to fill out and return an enclosed card within 15 days of the next election if they want to remain registered. If the voter fails to return the card after two November general elections, their registration would be canceled. Calley said in a press release that the bill is necessary following a 2019 audit of the state’s Bureau of Elections that found a need for better procedures to remove or update information for voters with birth dates indicating they are more than 120 years old and those who have not voted in Michigan for more than 20 years.

The 12 Michigan state senators who have sponsored voter restriction legislation and received a portion of the $672,500 that the RSLC funneled to the Chatfield funds, the Michigan GOP and the Michigan Senate Repulican Campaign Committee during the 2018 election cycle included: Sens. Aric Nesbitt (R-Lawton), Dale Zorn (R-Ida), Edward McBroom (R-Vulcan), Jim Runestead (R-White Lake), Jon Bumstead (R-Newaygo), Kevin Daley (R-Lum), Lana Theis (R-Brighton), Michael MacDonald (R-Macomb Twp.), Roger Victory (R-Hudsonville), Ruth Johnson (R-Holly), and Tom Barrett (R-Charlotte). Each of these 12 lawmakers have introduced bills that are part of a 39-bill voter suppression package that Michigan Secretary of State Jocelyn Benson testified to the state Senate Elections Committee are “based on misinformation about the 2020 election, which was in fact the most secure, fair and accessible election in Michigan history.” The proposed bills, Benson said, are often rooted in the “big lie,” or the false idea perpetuated by Republicans that the 2020 general election was stolen by the Democrats and that former President Donald Trump was the true winner.

Nesbitt, for example, sponsored Senate Bill 289, which would require the state Legislature to approve the spending of any federal election funds, essentially tying the hands of the secretary of state. Senate Bill 299, sponsored by Zorn, would mandate that officials stop the tabulation of ballots at noon the day after the polls close, regardless of whether every valid vote was counted. Meanwhile, legislation sponsored by Johnson, Senate Bill 310, would bar Michigan’s secretary of state from sending out mass absentee ballot applications, as was done in the 2020 general election.

“The legislation you continue to advance is not – as bill sponsors have claimed – the result of a deliberative, collaborative process that responds to the needs of our election administrators and the will of Michigan voters,” Benson said of the 39-bill package in her May 19 testimony. “Rather, it’s part of a national, coordinated and partisan strategy to keep the ‘big lie’ alive and in the national consciousness through legislation that would undo the very policies that ensured the 2020 election results were accurate and the process secure.”

The RSLC did not only pump money into Michigan elections with funds from companies, and the CPA documented that companies poured tens of millions of dollars that supported the election of legislators now supporting voter restrictions in Georgia, Texas, Florida, Pennsylvania, Arizona, and Iowa, in addition to Michigan.

This, Freed said, needs to be a wakeup call for companies that their political contributions are undermining democracy. The Conference Board, a nonpartisan business research organization, echoed these sentiments, writing in a March 2021 report that corporate donations are under increasing scrutiny following the Jan. 6 attack on the U.S. Capitol and the 147 U.S. lawmakers who voted against certifying the 2020 electoral college results.

“While companies have long engaged in politics, a new era of stakeholder scrutiny, social media, and political polarization has propelled corporate political activity — and the risks that come with it — into the spotlight,” the Conference Board wrote. “Political activity can pose increasingly significant risks for companies, including the perception that political contributions — and other forms of activity — are at odds with core company values.”

Below is a breakdown of the companies that gave more than $100,000 to the RSLC in the 2018 and 2020 election cycles. The RSLC then breaks it up among various states, including Michigan. Because of the way the RSLC provides its political contributions, the CPA wasn’t able to assess which specific companies gave the funds that went to Michigan, but any of the following could have, Freed explained.

Public companies that gave to the RSLC during the 2018 election cycle included:

Trade associations that donated to the RSLC during the 2018 election cycle included:

Companies that gave to the RSLC during the 2020 election cycle included:

Trade associations that gave to the RSLC during the 2020 election cycle included:

This article was originally published by Michigan Advance. It is republished here with permission.