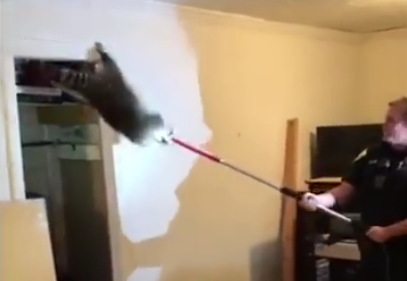 A scene fit for an action movie played out in Sheridan Township this weekend when a family of raccoons fell through the ceiling of a home and the mama raccoon quite literally fought tooth and nail to avoid capture.

Luckily, there was a camera rolling to give us a glimpse into the exciting world of animal runs. Video posted by the Albion Police Department shows a hole in the living room ceiling of home and a large mother raccoon resisting a firefighter clad in protective gear as he tries to ensnare her. After apparently biting the firefighter, the raccoon flies across the room in the span of milliseconds, prompting the man behind the camera to jump out of the way and scream, "Oh, Jesus!"

The video eventually cuts to mama raccoon engaged in a battle of tug of war with a police officer who is trying to lure her with a pole from the top portion of a closet. All the while, her docile cubs cuddle adorably on the couch just under the portion of the ceiling from which they fell.

The Associated Press reports that a dog catcher pole was used to collar the raccoon and that no people or animals were injured, though the firefighter does say the raccoon bit through his glove and drew blood.

You can take a look at the incredible 1 minute and 48 seconds of video below. Heads up to turn your volume down before the 1:20 mark, when mama raccoon lets loose a piercing screech.