Under Trump, a growing number of metro Detroit millennials are turning to socialism 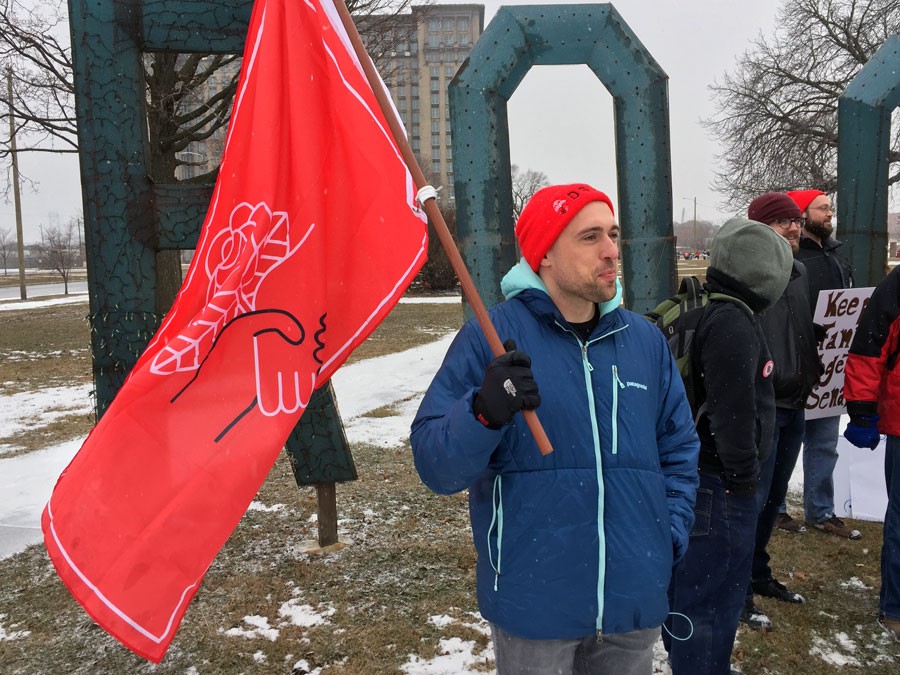 Violet Ikonomova
A DSA member stands in solidarity with immigration activists at a January demonstration in Detroit to urge Congress to pass the Dream Act.

On the first Saturday of the year, more than 50 people were packed into a fluorescent-lit room at the Royal Oak Senior Center with the ultimate goal of overhauling the country's economic order. The crowd was mixed in age — about a third of its members looked to be senior citizens and a third appeared to be in their 20s. Across the spectrum, quite a few people wore flannel.

The gathering was a general membership meeting for the Greater Detroit Democratic Socialists of America, but its proceedings hardly suggested a revolution was afoot.

Instead, leaders of the DSA chapter outlined modest initiatives that, at best, would help address some of the negative effects of capitalism.

An early-30s, burly guy in a beanie and red flannel described a plan to impose stronger oversight on for-profit charter school authorizers. The group's co-chair announced the next date DSA members would escort women seeking abortions to a local clinic where a small crowd of anti-choicers routinely gathers to shame them. An elder member outlined a plan to get young, newly registered voters to cast ballots in a primary election before going off to college, so they can vote absentee in November.

An election was also due to take place at this particular Saturday meeting. The group's steering, or leadership, committee had a vacancy.

"I feel strongly about working for marginalized populations and working toward social justice," said a young social worker vying for the slot.

By the time she wrapped up her pitch, several latecomers had gathered near the entrance.

"You can sit down, I'll gladly move my stuff," the co-chair, Catherine Hoffman, called out from the center of the room with a smile. "We're all socialists, we're friendly."

To that end, both the young social worker and her competitor went on to be elected to the steering committee after an elder member pointed out that the group's bylaws allow for additional leaders. There are now 17 people leading the chapter — 9 are male and 8 are female. The equitable makeup of the committee belies the demographics of the room, which is three-fourths male (and overwhelmingly white).

The rest of the formal meeting is comprised mostly of votes on more mundane matters. David Bonior, a Democrat from metro Detroit who served as House minority whip in the '90s, is releasing a memoir and has asked that the organization host a book signing on his behalf. The other DSA co-chair, David Green, a man with a trim salt-and-pepper beard who wears a tucked-in button up and jeans, explains that Bonior is known for having sponsored legislation that raised the federal minimum wage.

The young membership isn't sold on helping him.

"What does he say about socialism in the book?" asks a young woman. Nothing.

"What would it entail, resource-wise?" asks another member. Very little.

"Is there a donation to the organization?" No, but proceeds from the book will go toward supporting young people in activism.

After nearly 10 minutes of this, a vote is held. The ayes have it.

Two years ago, it would have been unfathomable for a book signing for a former high-ranking Democrat to illicit so many questions. But the back-and-forth is emblematic of the position the DSA finds itself in today: Its membership has more than quintupled, and many of those who've joined its ranks are young, idealistic, and unwilling to support party-line Democrats, or, to use a term that has become a pejorative — centrists.

In light of that, the coiffed politician in a pinstripe suit who slinked in mid-meeting doesn't look like he's going to have much luck with the crowd.

"I'm the only Democrat state senator from Macomb," Steve Bieda, who's mounting a Congressional bid and has come seeking support, tells those gathered. "I share your values."

At a table just feet from the state senator, a young member fiddles with his phone.

Packed meetings are a relatively new phenomenon for the Greater Detroit DSA. Nationally, the organization has seen a tidal wave of new membership since Vermont Senator Bernie Sanders, a self-described democratic socialist, mounted his presidential bid in 2015. DSA is now the largest socialist organization in the country, with 32,000 dues-paying members. Before the so-called "Bernie bump," DSA's ranks held steady around the 6,000 mark — the same number of people that belonged to the group when it was created via the 1982 merger of two socialist organizations that came out of the anti-war movement.

That growth has been facilitated by a tripling in the number of chapters across the country. Pre-Sanders, there were more than 30 chapters nationwide — now, there are more than 100. In Michigan, a new chapter has been created in the Ann Arbor area and seeds for new chapters have been planted in Flint, Marquette, Lansing, and Grand Rapids.

Greater Detroit, one of the organization's original chapters, has seen its membership swell to about 300. While there's no official count of how many dues-paying members there were before the surge, one longtime member estimates the local chapter peaked out at 100 people. Others say the group's monthly meetings used to draw just over a dozen people. Now there are usually 40 to 75 people on hand.

Among the new recruits is Naomi Burton, a 28-year-old P.R. rep who grew up in Ann Arbor, and credits Sanders' candidacy with helping shape her once-amorphous political beliefs.

"It was the first time I heard things like Medicare for all, free college tuition, universal [basic] income," she says. "Bernie introduced the language that made me be able to evolve my political ideologies."

Saddled with student debt and worse off than their parents were, millennials are growing dissatisfied with or outright contemptuous of capitalism.

A mainstream Democrat until last year — or "neo-liberal" as she puts it — Burton voted for Obama twice before supporting Sanders in the 2016 Democratic primary and Clinton in the general election. After Clinton's loss, Burton looked to the Democratic party to embrace some of Sanders' ideals. But when the party failed to pivot left, instead dwelling on the reasons Clinton should have won (see: Russian interference, sexism), she began to search for an alternative.

"The Democrats put the nail in the coffin with the 'we're not as bad as him' tactic," she says. "It made me kind of take a step back and realize the party is either severely inept or disconnected from their voters, or, more obviously — they don't want to back progressive policies because they're beholden to special interests who are hurt by those."

In the DSA, Burton says she found a group "actually committed to shifting power from capital to people."

"It was just kind of that simple ideology that is so difficult to land with Democrats, that really clicked with me," she says.

Smart, driven, and eager to make a difference, Burton dove headfirst into socialism, gaining a deeper understanding of the underpinnings of the ideology through texts like The Communist Manifesto and a recently released book by the leftist Jacobin magazine, The ABCs of Socialism. She took on leadership roles within the DSA, getting elected to its steering committee and becoming co-chair of both its communications and reforms committees.

As her worldview began to evolve, so too did her daily choices. Once a near-bumper-sticker-level devotee of NPR, Burton has started turning to leftist media outlets, like the D.C.-based progressive news "co-op," The District Sentinel. She watches less TV and avoids cable news entirely. When she does sit down for a show, she opts for programs that "highlight our dystopian reality," like Shark Tank. This month, her newfound ideology will give way to a full-on lifestyle revamp: Burton has drastically reduced her living expenses and is leaving her job at GM to slow down — "capitalism has us going so fast," she says — and refocus her skills "toward the larger effort of equality."

"When you come to that moment of clarity when you just see capitalism as oppressing everything and everyone, standing around the water cooler feels and is kind of devoid of meaning," she says.

Burton's sentiments reflect a newly discovered trend among millennials. Saddled with student debt and worse off than their parents were, the age group is growing dissatisfied with or outright contemptuous of capitalism and, by extension, has a far more favorable view of socialism than older generations. Numerous polls have identified this phenomenon, but one need look no further than the overwhelming young adult support for Sanders' presidential bid: More than 2 million people under the age of 30 voted for him in the primaries and caucuses of 2016, more than all of Donald Trump's and Hillary Clinton's votes from that age group during the primaries and caucuses combined.

It's these disillusioned young people who've propelled the DSA's resurgence and, in the process, utterly changed its face and tenor. Pre-Bernie, the group's median age was 68 — today it is 33. The new members are enthusiastic and eager to get things done, but, perhaps most importantly, they view themselves as more militantly leftist than the organization's longtime members.

As an engagement coordinator for the Greater Detroit DSA put it, the young membership has breathed "life and confusion and consternation" into the once obscure organization.

"They've been doing things the same way since the '80s and it sometimes rubs people the wrong way," says 33-year-old Jason Hackney. "We found that with this huge influx of young people a lot of things that we want to do get bottlenecked. Like, we're having all these issues over immigration. Where are we? Why aren't we doing anything? So, there are some growing pains."