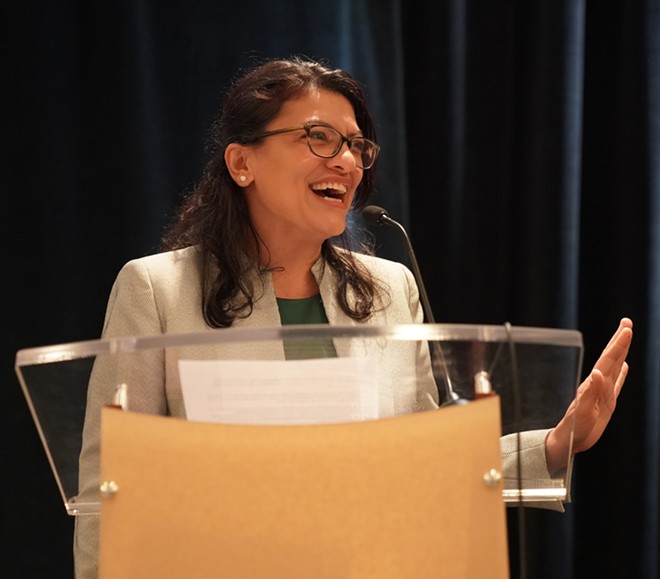 The event highlighted the one-year anniversary of the U.S. Supreme Court’s decision to allow for a travel ban that largely targets majority-Muslim countries. Congress has introduced legislation (H.R. 810) that would repeal the ban, as well as prevent similar legislation from being enacted.

Tlaib and fellow Reps. Pramila Jayapal, Sheila Jackson-Lee, Ayanna Pressley, and Jesús "Chuy" García also introduced the Building Our Opportunities to Survive and Thrive (BOOST) Act, an anti-poverty bill that would provide up to $6,000 to individuals and families via a refundable tax credit.

“We have a crisis in this country. Far too many people are living in poverty and many more are an emergency away from finding themselves struggling to put food on the table,” said Tlaib, according to a press release. “Nearly half of Americans do not have enough cash to cover a $400 emergency expense. In my home state of Michigan, that’s a cracked rim from the many potholes residents encounter. The BOOST Act is about fairness. This is a win-win. We know when we put money in the pockets of families, they are able to provide necessities and the local economy is helped as well.”

If enacted, the BOOST Act would help over 153 million adults and over 64 million children, according to the Institute for Taxation and Economic Policy. It would grant a total of 218 million people additional income.

The act vastly differs from the Tax Cut and Jobs Act of 2017, which heavily benefited corporations and the wealthy.

“Enough of throwing our tax dollars at wealthy people and corporations under the false guise of job creation,” Tlaib continued.“Enough of the tax scams like the GOP tax scams that have led to lining the pockets of CEOs and shareholders.”