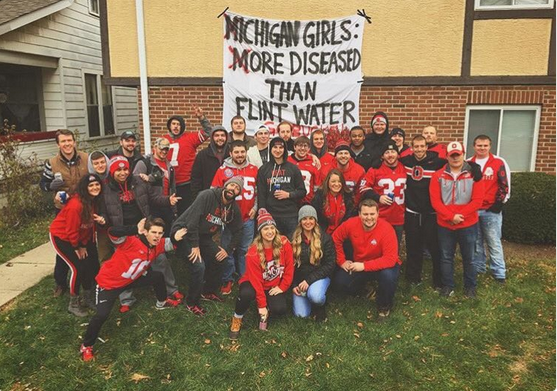 The photo above has been circulating social media since yesterday after it was posted on Twitter by the account called @barstoolOSU with the caption "Truth" above the photo. The rivalry between Ohio State and University of Michigan is very deep-rooted, but this sign is taking things way out of hand.


As you can see, the sign reads "Michigan Girls: More Diseased Than Flint Water." In case these Ohio State fans were not aware, Flint still doesn't have clean water.

It's not clear from the photo if these fans are OSU students, or if the photo was even taken in Columbus, but many Twitter users have called out the tweet for being "disgusting" and "classless."

What is even more mind-blowing is that the tweet hasn't been taken down after all of the backlash on social media. With one Twitter user saying "lead isn't a diseased, stupidity might be tho," I think we can all agree that this tweet needs to be taken down.