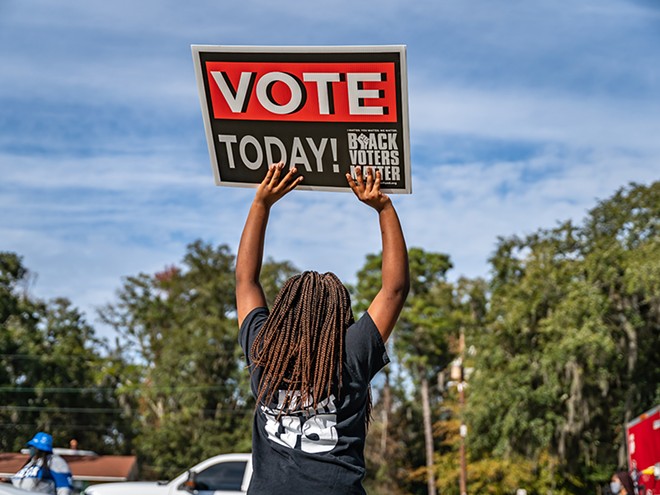 After losing an election, a Republican president invents baseless allegation of fraud — conspicuously pointing the finger at heavily African American cities he calls "corrupt" — which his partisans use to try to overturn the election results while his devotees mount a violent insurrection. Undaunted, Republicans legislators introduce hundreds of bills to "restore confidence" in elections by making it more difficult for people — usually people of color — to vote.

Legislation has already cleared the House that would arrest this assault on democracy. But one senator is standing in the way: "Our ultimate goal should be to restore bipartisan faith in our voting process by assuring all Americans that their votes will be counted, secured, and protected," Manchin wrote in the Washington Post last week, categorically ruling out eliminating the filibuster.

In an earlier interview, he elaborated: "We had an insurrection on Jan. 6 because of voting, right? And lack of trust in voting? We should not, at all, attempt to do anything that would create more distrust and division."

In Manchin's view, we can't put out the fire unless the arsonists agree.

I won't venture a guess as to his motivations, but until the West Virginia senator comes to grips with reality, the For the People Act is going nowhere. And states will continue attacking the vote, like Georgia did last month.

Republicans have claimed that criticisms of Georgia's law are rooted in exaggerations. They say the law expands voting access — which is true for rural, Republican areas. They also say Georgia's restrictions are no worse than those of other states — New York, for example — and point out that some controversial provisions were removed, including bans on no-excuses absentee voting and Sunday voting.

Still, there's plenty that's objectionable; the law makes it a crime to provide voters in line with food and water and allows the state to take over local election boards.

And you can't separate the legislation from its context: White Republicans in Georgia, with its long history of Black voter suppression, passed a law that will make it more difficult for Black people to vote. This law exists only because Black Georgians defeated Donald Trump, which to the white Republicans who rallied to Trump's conspiratorial banner, necessarily meant that the "integrity" of the state's elections had been "compromised."

Nor can you ignore the larger truth that the Republican Party has wedded itself to the proposition that too many of the wrong people are voting. This notion — voiced earlier this year by an Arizona state legislator who said "everybody shouldn't be voting" because "we have to look at the quality of votes," and more recently by Mississippi's election chief, who worries that higher registration will lead to "uninformed" voting by "woke" college students — was given pseudo-intellectual cover last week in a National Review essay by Kevin Williamson, who posited that we'd be better off with fewer but "better" voters.

Williamson linked his argument to the Founders' distrust of plebiscites rather than to the social Darwinism of early 20th-century white supremacists. But you'd be forgiven for intuiting unsubtle echoes of the Jim Crow defense that "inferior" people are incapable of responsibly exercising the franchise. After all, someone has to decide who those "better" voters are; it doesn't take a Ph.D. in American history to see where that ends.

Republicans chafed at any comparison of Georgia's law to Jim Crow — before Williamson's article went live, National Review editor Rich Lowry said invoking the term was "just as loathsome and self-discrediting as the Nazi charge" — and lashed out when Major League Baseball moved the All-Star Game from Atlanta to Colorado and the state's biggest corporate names denounced the law as "unacceptable."

The Georgia House voted to revoke tax breaks for Delta after the airline issued a statement condemning the law. (It failed in the Senate.) Josh Hawley, the Missouri Republican who led the Senate Sedition Caucus on Jan. 6, said he would break up "giant woke corporations." Sen. Marco Rubio, a malfunctioning Florida robot, sided with unionizing Amazon workers in Alabama because he wanted to punish Amazon for its supposed "wokeness." He later called the All-Star Game relocation "woke corporate virtue signaling."

Senate Minority Leader Mitch McConnell — an ardent defender of corporations' right to funnel millions of dollars into his PACs — direly warned businesses that there would be "serious consequences" for "behaving like a woke parallel government" and becoming "a vehicle for far-left mobs."

To use a great Southernism: a hit dog hollers.

History and reapportionment make Republicans likely to reclaim the House next year. (If new voting laws depress Democratic turnout, so much the better.)

McConnell knows that money talks. After the anti-LGBTQ law known as HB2 sparked boycotts in North Carolina in 2016, the Republican governor was ousted and the law was mostly repealed. Last weekend, defying McConnell's demand to stay out of politics, more than a hundred major corporate leaders discussed ways to oppose anti-voting laws, including halting donations to politicians or delaying investments in states that pass them.

But McConnell also knows the long game tilts to his advantage. History and reapportionment make Republicans likely to reclaim the House next year. (If new voting laws depress Democratic turnout, so much the better.) Aggressive gerrymanders could stack the deck in their favor for a decade.

Voting rights advocates believe they have momentum to stop bills in Texas, Florida, Arizona, and Michigan. Republican jeremiads about "woke" corporations notwithstanding, polling suggests that pluralities of Americans and baseball fans favor MLB's decision to pull the All-Star Game. But the bigger prize is sitting in the U.S. Senate.

The For the People Act bans partisan gerrymanders. Companion legislation — the forthcoming John Lewis Voting Rights Advancement Act — would restore the Voting Rights Act protections the Supreme Court struck down as outdated in 2013.

Right now, Senate Democrats can preserve and strengthen the right to vote. Or they can let Republicans block a vote from even taking place, because one man believes — or has deluded himself into thinking — that he can find common ground between arsonists and firefighters.

Get Informed Dissent delivered straight to your inbox. Subscribe today at billman.substack.com.