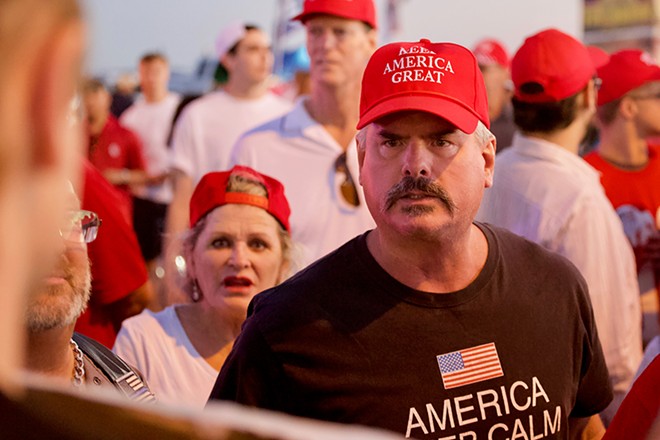 Eric Rosenwald / Shutterstock.com
MAGA runs on rage. The 2024 primary is going to be MAGA on steroids.

On June 10, the Florida Board of Education banned the teaching of critical race theory from its classrooms, with Gov. Ron DeSantis accusing educators of “trying to indoctrinate [students] with ideology.”  The 1619 Project was, of course, banned.

It’s almost counterproductive to point out that no K-12 students in Florida learn CRT, like an admission that it would be bad if they did. Students aren’t taught CRT for the same reason they’re not lectured on John Rawls and Jürgen Habermas.

On June 15, Texas Gov. Greg Abbott signed into law a bill forbidding K-12 social studies teachers from discussing concepts such as that a person could “be discriminated against or receive adverse treatment solely or partly because of the individual’s race”; that “meritocracy or traits such as a hard work ethic are racist or sexist or were created by members of a particular race to oppress members of another race”; or that slavery was central to the country’s founding.

On June 22, DeSantis signed a bill requiring public colleges and universities to survey students and faculty about their beliefs and viewpoints. The Orwellian-ness of the state collecting a database of its employees’ and students’ political positions aside, the authoritarian kicker is what DeSantis plans to do with the results: defund education if he thinks universities are “intellectually repressive” — i.e., too liberal, which he will. The results will also provide a weapon for the unsubtle threat DeSantis is sending to academics: Piss me off, and you’ll pay.

“Unfortunately, now the norm is, these are more intellectually repressive environments. You have orthodoxies that are promoted, and other viewpoints are shunned or even suppressed,” DeSantis said at a press conference. DeSantis failed to cite examples, but he “knows a lot of parents” are worried their kids will be “indoctrinated.”

That same day, Abbott announced a special session of the Texas legislature in July to address the state’s pressing issues: making it harder for people of color to vote and “[making] sure we do more” on critical race theory, he told campaign supporters.

“It’s a strange dynamic we’re seeing,” a Texas Democrat told the Huffington Post. “Florida and Texas are trying to outcompete each other to see who can pass the most far-right Neanderthal legislation. … The focus is on scoring points with old, white voters who see the country slipping away from them demographically.”

If he’s reelected next year — given Florida Republicans’ decades of work to rig the system, and Florida Democrats’ long track record of sucking, he probably will be — DeSantis will be a frontrunner for the Republican presidential nomination. Abbott — should he be reelected next year — will likely run, too, jockeying for position in the same political lane. Hence, the tit-for-tat culture-warrior posturing: Anything you can do, I can do Trumpier.

On May 31, Abbott declared 34 border counties a “disaster” so he could spend $250 million to build the wall Trump never did. Two weeks later, DeSantis announced that he was sending Florida police officers to the border in Texas and Arizona.

In April, DeSantis signed a bill that all but bans protesting: Three or more people engaged in “tumultuous activity” is a riot; blocking roadways or vandalizing monuments is a felony; arrested protesters must spend the night in jail. (Also, DeSantis gets veto power over local police-funding decisions.) In May, Texas made it a felony for protesters to block an emergency vehicle — not the same. But Abbott also signed an unconstitutional (for now) bill banning abortion at six weeks; DeSantis couldn’t make that happen.

Florida cracked down on absentee voting — DeSantis allowed only Fox News to witness the bill-signing — and, in its special session, Texas will, too, while also targeting voting methods popular among Black Houstonians. Florida enacted an unconstitutional law to sanction social-media companies that ban politicians; the Texas Senate passed something similar, though the bill didn’t get to the gov’s desk.

You get the point. They’re responding to each other, sure. But they’re also trying to capture the MAGA zeitgeist — to figure out what the crowd wants and give them more than anyone else. Their top priorities aren’t intended to make people’s lives better. That’s not what the crowd wants. Instead, they target people: people who vote the wrong way, who think the wrong way, who challenge authority.

That’s their ticket to the 2024 nomination. Not governing effectively. Not developing creative solutions to complicated problems like climate change and economic inequality or preparing for the next pandemic or natural disaster. But finding or inventing enemies: election fraud, protesters, cancel culture, Twitter, woke corporations, critical race theory.

It’s not just Abbott and DeSantis. Steve Bannon and other Trumpland sleazeballs think they can return to power by exploiting racial anxieties. “[Critical race theory] is the Tea Party to the 10th power,” Bannon told Politico. “… I look at this and say, ‘Hey, this is how we are going to win.’ I see 50 seats in 2022. … People who are serious in 2024 and beyond are going to focus on it.”

It doesn’t get more explicit than that. Lee Atwater’s infamous Southern Strategy interview comes to mind.

As governors, DeSantis and Abbott got a head-start on culture-war posturing. Others who covet 1600 Pennsylvania — Josh Hawley, Ted Cruz, Rick Scott, Nikki Haley, Tom Cotton — need to catch up, and DeSantis and Abbott need new outrages, new enemies, to stoke the fire.

MAGA runs on rage. The 2024 primary is going to be MAGA on steroids. That’s where the crowd is. It’s what the people want.

Which is to say: The next three years are going to be a race to the bottom. Of hell.