After a bitter battle to unionize, baristas are forced to move on 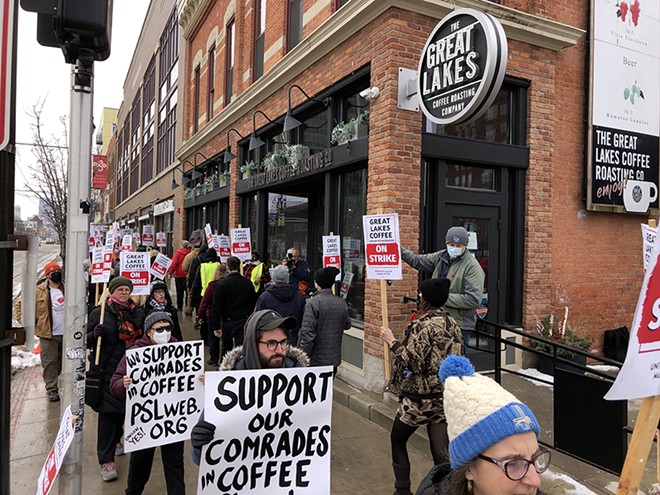 The months-long fight to unionize Great Lakes Coffee Roasting Co. has all but ended.

Striking workers announced Monday that they were withdrawing from an election to form a union because the company has been closing its stores.

“While we are disappointed and heartbroken, we are grateful for all who have stood with us, for your solidarity, love, and support,” the workers said in a statement. “We’ve been on strike for over 150 days, & all of us have had to find new jobs. Our resources, time, and energy need to be cared for in order to stay in the fight for workers’ rights.”

The coffee chain’s main location on Woodward Avenue in Midtown closed in early January because of a COVID-19 outbreak, and it hasn’t been open since workers went on strike in February.

The company is now down to two metro Detroit locations and one in Key West, Fla., according to the Great Lakes Coffee website.

The employees were asking for a fair contract that includes a starting wage of at least $15 per hour; COVID-19 protocols; anti-harassment and anti-discrimination protections; affordable health, dental, and vision insurance; and paid time off, including sick days and parental leave.

Workers said they were overworked, understaffed, underpaid, and mistreated by management.

The National Labor Relations Board approved an election for unionization after 11 days of hearings.

“We fought every step of the way, and we’re not going anywhere,” the employees said. “As our fight continues, we remind you that all struggles are connected. We plan to continue organizing with our community.”

Meanwhile, 10 Starbucks stores in Michigan have voted in favor of unionizing, and two more plan to hold a union election.