Soil tests at Detroit toxic waste facility are cause for concern 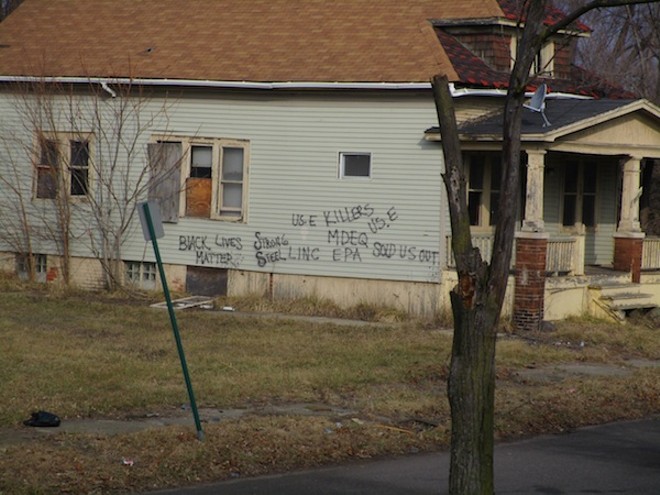 Photo by Michael Jackman
A house on Concord Avenue, a block-and-a-half away from U.S. Ecology, bears complaints about the nearby toxic waste facility: "US. E KILLERS ... MDEQ SOLD US OUT."
As we noted two years ago, when a neighboring business plans for an expansion, it isn’t always cause for rejoicing.

Such is the case with the planned expansion of U.S. Ecology's toxic waste facility on Georgia Street. The company is hoping Michigan's Department of Environmental Quality will issue them a permit for a tenfold expansion, and has been hoping and waiting for it for almost two years now.

Many neighbors, including some we've spoken to who feel "choked out" by the industry, are opposed. Within a half-mile are several churches and mosques, the Detroit Water and Sewerage Department, Crockett High School. Most of Hamtramck, the densest city in Michigan, is within a 2-mile radius of the plant.

Comments from the Great Lakes Environmental Law Center filed with MDEQ are nothing short of alarming, including the statement that the "volume of storage of new waste and the number of new chemicals ... is staggering. Many of the hazardous waste chemicals ... are known human carcinogens, such as arsenic, benzene and vinyl chloride. Other chemicals disrupt hormones and harm the immune system. In short, the hazardous wastes accepted at this facility are the ... most dangerous known to man."

As the Detroit Free Press has reported, the facility’s new license would “allow it to increase hazardous waste storage there in tanks and containers from 64,000 gallons to nearly 666,000 gallons.” It would almost certainly then request permission to dump "a stew of toxic chemicals and metals such as mercury, lead, arsenic and cyanide into the sewer system at a rate of 300,000 gallons per day." In a part of town where narrow old sewer pipes often cause sewage to back up into homes during flooding, that's got to raise some concerns.

The Free Press had also reported that, "US Ecology spokesman David Crumrine said there have been no adverse environmental impacts during the 40 years the plant has operated."

New soil tests done by the Coalition to Oppose the Expansion of U.S. Ecology would seem to suggest otherwise. Early in July, the coalition took soil samples from the vicinity of U.S. Ecology and had them tested by Pace Analytical Services, a Grand Rapids-based environmental testing services. Pace's laboratory found "elevated concentrations of arsenic, diesel and copper, along with many other metals in the soil." Here are some of their findings:

Arsenic: EPA safety limit in soil is 0.39 parts per million (PPM). Our samples in public spaces around US Ecology on Georgia St ranged from 1.6 PPM to 6.3 PPM — up to almost 20 times the acceptable limit. EPA classifies arsenic as a human carcinogen because long-term exposures even at low levels can cause cancer of the lungs, bladder, skin, liver or kidneys.

Diesel DRO: Diesel is not normally found in the soil, yet much was found in the soil around the plant. Long-term exposure to diesel exhaust, with hundreds of trucks driving down Georgia St. daily, can increase the risk for developing asthma, lung and heart disease and negatively affect brain and immune function.

Copper: Inhaling copper dust and fumes can negatively affect respiratory, gastrointestinal, liver and endocrine function. High levels of copper were found in the samples. Most of the metals tested in the soil were elevated far beyond the Michigan soil averages according to information provided by the EPA.

Pollution doesn't have fingerprints, but it seems fair to say that at least some of this pollution likely came from the facility U.S. Ecology would like to expand. The test results are the coalition's way of demonstrating that more soil tests must be taken, that MDEQ must stop granting waivers dispensing with them, and that, just maybe, the community is already suffering from enough environmental injustice.

Curious? Interested in learning more? Get in touch with the coalition by calling 313-333-0976, emailing [email protected], or seeing www.coalitionstopuse.weebly.com.