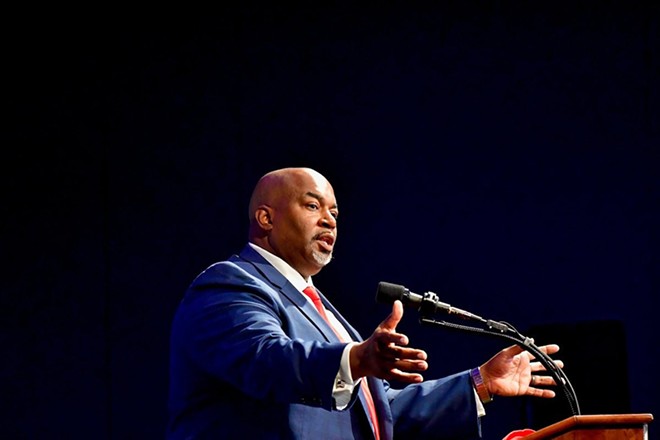 If you’re not familiar with Mark Robinson, you will be soon.

A Black Republican who makes up in ambition what he lacks in political experience or policy expertise, Robinson rode a viral rant about gun rights into North Carolina’s lieutenant governor’s office in 2020. As soon as he was sworn in, he started laying the groundwork to run for governor in 2024. Conservatives tout him as a “rising star.”

Robinson’s one cool trick for MAGA stardom is an unapologetic embrace of Christian nationalism. He is a bombastic culture warrior who rails against abortion (even in cases of rape and incest, which he dismisses) and school “indoctrination” (which he believes is an ever-present threat). He tells pregnant women, “It’s not your body anymore,” and non-Christians, “I’m not going to let you force your demonic views on me and my children.” Oh, and taking children to gay pride parades is “demented” and transgender people have “something wrong with their brain.”

Like many politicians preparing their next ascent, Robinson is about to release a memoir — We Are the Majority: The Life and Passions of a Patriot. But evidently, he didn’t have an editor to run interference between his brain and his word processor. According to previews, in addition to the expected array of unhinged and offensive comments, Robinson made an interesting suggestion for education policy.

Robinson is paranoid about any teaching that might be “woke,” which in his mind includes teaching children about climate change, which he doesn’t believe in. And teaching them social studies leads to conversations about history, which leads to slavery and Jim Crow and other ugly bits that might make nice white kids uncomfortable.

In other words, the obviously newsmaking position he staked out in his campaign-launching memoir doesn’t reflect his actual position.

Robinson also proposed eliminating the state’s board of education and local school boards and centralizing education policy under one person. And then, through a massive expansion of charters and vouchers, he wants to put that person out of a job.

Lately, though, depriving public schools of resources hasn’t been enough. Right-wing propandists hyperventilated about critical race theory and teachers “grooming” kids into queerness. Fox News personalities accused preschool teachers of “brainwashing toddlers,” called teachers “the KKK with summers off,” and encouraged violence against teachers who discussed gender issues. Far-right lawmakers cracked down on books and classroom discussions that deviate from American mythologies or ask students to think critically about race or gender.

The craze might have reached peak absurdity when a Texas school administrator admonished teachers to both-sides the Holocaust to avoid running afoul of the state’s anti-CRT law. But no less disheartening is a Florida school district’s decision to cancel book fairs for the same reason.

This demagoguery led to a sharp decline in the percentage of Republicans who believe public schools benefit the country (just 42%). Along with low pay, legislative bigfooting has led to a collapse of teacher satisfaction.

Combine all of that and — shockingly — we have a massive teacher shortage.

One way to deal with such a crisis would be to treat educators like professionals, let them do their jobs, and pay them enough to live on. Alternatively, like Florida and Arizona, you could give them the finger. Arizona is allowing college students to teach; Florida is recruiting veterans with no educational experience — and no degree — to go into classrooms.

The next target of this anti-education campaign is academia, which conservatives have blamed for turning students into Marxists since the civil rights movement. Indeed, just 34% say colleges serve a public good.

Not surprisingly, Ron DeSantis’s Florida is at the vanguard. In April, the Florida Legislature passed House Bill 7, the first law to regulate classroom instruction in higher education under the pretense of fighting CRT. (Parts of the law that sought to prevent diversity programs at private businesses have been blocked by a federal court.)

The law requires university instruction to be “objective” — as defined by the (mostly) DeSantis-appointed Board of Governors or a Republican-led legislative subcommittee. Considering that the law was called the “Stop WOKE Act,” you can imagine what views will be seen as “objective.”

Take, for example, the guidance issued to faculty at North Florida College to see how this will play out: Sure, professors can discuss the relationship between Jim Crow and other forms of racial discrimination, but they can’t say white people were responsible for segregation. And yes, professors can have students read contemporaneous accounts of Martin Luther King Jr.’s March on Washington in 1963, but only after reciting a disclaimer that those articles “may contain opinions that do not reflect the views of this College.”

Like K-12 schools, public university systems in Florida and states like it will, sooner than later, struggle to attract talent. Those who can will go where they’re respected, and the industries that will dominate the 21st century will follow. Their workers will demand that their kids learn from actual teachers, not whatever dude the school system picked up off the corner for $20 and a pack of smokes.

Short-term populism has long-term consequences. And if the country divides into states that sneer at academic elites and states that welcome and try to develop innovative minds, guess who will come out on top.