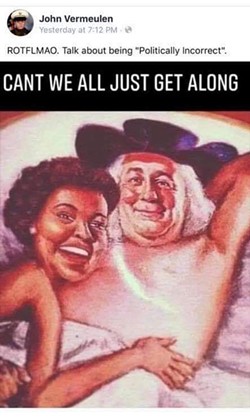 John Vermeulen's Facebook
A meme depicting the mascots of Aunt Jemima and Quaker Oats posted on the Facebook account of Shelby Twonship trustee John Vermeulen.
A Shelby Township trustee’s Facebook page is riddled with offensive remarks, from defending Confederate leaders to criticizing George Floyd, who was killed when a Minneapolis cop kneeled on his neck for nearly eight minutes.

John Vermeulen, a Trump-loving Republican, also posted an image depicting the mascots of Aunt Jemima and Quaker Oats in bed together, under the caption, “Can’t we all get along.” Quaker Oaks recently announced it’s changing the name and logo of Aunt Jemima because it’s “based on a racial stereotype.”

Above the meme, Vermeulen wrote, “ROTFLMAO. Talk about being ‘Politically Incorrect.’”

In another post, Vermeulen scoffed at the removal of Robert E. Lee monuments, saying the Confederate leader, who waged a civil war to protect slavery, was merely trying to “preserve the Souths Economy.”

“Lee and many like him stood to preserve the Souths Economy and what had been a long standing and accepted practice of the times, Vermeulen wrote. “Lee and many others of that region of the United States risked their lives to protect their Economic System and many sacrificed their lives as well in doing so. I ask would the people of our area be willing to fight for the Auto Industry and all that it provides to the people of this State, and our Country? To demolish this monument is akin to erasing a part of American History.” 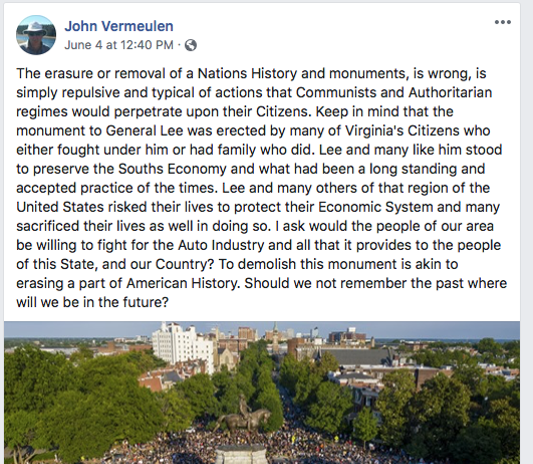 Vermeulen was one of five trustees who voted last week to suspend, rather than terminate, Shelby Township Police Chief Robert Shelide for 30 days after tweets surfaced in which he glorified police brutality and called protesters “barbarians and subhumans.”

Shelby Township
Trustee John Vermeulen
Vermeulen also posted a news article about Floyd’s criminal history, calling it “the other side of the story.” He also questioned whether police were at fault for Floyd’s death.

“Mr. Floyd was a very big and powerfully built man and importantly I think a lot of Police Officers would tell you that sometimes when people say they give up, cannot breathe who are being arrested/ subdued when the Police loosen their grip, people come out swinging and kicking,” Vermeulen wrote.

Vermeulen “liked” comments that shifted the blame on Floyd, including one that read, “Uhhhhh, if he hadn’t tried to use a counterfeit bill, he’d still be alive.”

Vermeulen did not respond to Metro Times’ request for a comment.