Save that Tiger (Stadium) 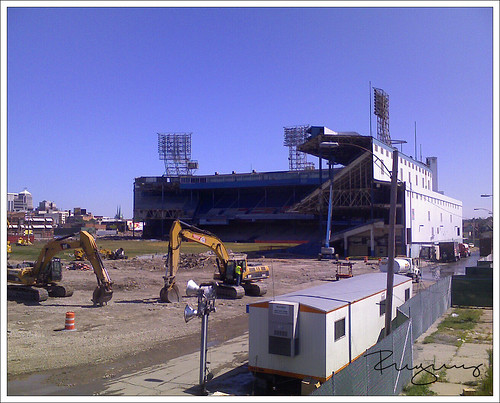 Thom Linn, president of the Tiger Stadium Conservatory sent us an email this afternoon regarding the recent decision to completely demolish the old Tigers ballpark in Corktown. We were touched.

“I was shocked to find out that the Detroit Economic Growth Corporation (DEGC) held a meeting yesterday morning about which I was not notified, deciding to demolish Tiger Stadium in the next couple weeks,” he wrote, noting not only the “numerous college and city youth teams eager to play baseball on the restored field,” but also that if the DEGC is successful “we will lose the $22 million we have secured thus far in federal earmarks, grants and tax credits, the city will lose the jobs the project would create, and we will all lose one of the city’s (and the nation’s) historic gems, creating yet another vacant, blighted space in Detroit.”

Even MSNBC talking head Keith Olbermann weighed in on the topic Wednesday night on his show Countdown. “Why the city’s leadership would do this is a mystery,” Linn wrote. “Apparently, their goal is to save the city by demolishing it, irrespective of the will of its citizens.”

The topic’s been a hot discussion point for years now, dividing Detroiters with conservationists on the one side and “just-level-the-damn-thingers” on the other, but it looks like it’s finally coming to a head.

And if you’re so inclined to be part of the last minute plea of desperation: