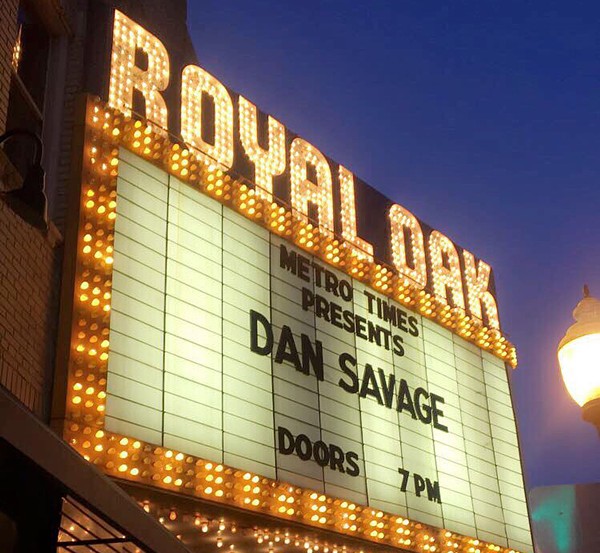 I visited Royal Oak, Michigan, for Savage Love Live at the Royal Oak Music Theatre. I didn't get to all of the questions submitted by the large and tipsy crowd — a crowd that skipped the Stormy Daniels interview on 60 Minutes to spend the evening with me (so honored, you guys!) — so I'm going to race through as many of the unanswered questions as I can in this week's column. Here we go...

Is there a way of breaking my cycle of being totally sexual and into someone for the first six months and then shutting down to the point that I don't want to be sexual with them at all? What's wrong with me?

Breaking a long-established pattern may require the aid of a therapist who can help you unpack your damage — if, indeed, this is about damage. Because it's possible this could be the way your libido works; you could be wired for a lifetime of loving, short-term relationships. While our culture reserves its praise for successful long-term relationships (think of those anniversary gifts that increase in value with each passing year), a short-term relationship can be a success. Everyone get out alive? No one traumatized? Were you able to pivot to friendship? Then you can regard that relationship as a success — or all those relationships as successes.

How common a kink is it to enjoy seeing your significant other having sex with someone else?

My husband is a sweet guy who is very good to me. But he is also a gun-toting, right-wing conservative, and these days that feels like an insurmountable difference. We have been together for seven years and married for two. No kids yet. I love him — and the thought of leaving him is terrifying — but I honestly don't know if this is going to work.

When you are entering into something new, how do you differentiate between infatuation and real feelings?

Infatuation is a real feeling. Only time will tell if other real but more lasting feelings — like, like like, love, lasting love — will surface when those feelings of infatuation inevitably fade.

I can easily have an orgasm with toys but I can't have one with my boyfriend. What gives?

Your boyfriend could give you orgasms if you handed him one of those toys, showed him how you use it on yourself, and then guided his hands the first few times he used it on you.

Donald Trump has been impeached, and you get to decide the punishment. So what sex toy gets used on him and who gets to use it?

Trump doesn't deserve a sex toy. Sex toys are for good boys and girls. All Trump deserves is a lump of the coal he loves so much shoved far enough up his ass to serve as a gag.

Is there EVER a healthy way to partake in sensual parties while in a monogamous marriage?

The Dirty Sanchez — actually a thing?

I'm married and finishing my Ph.D. while working full-time. As a result, I don't get to spend as much time as I would like with my wonderful husband. I know you're a workaholic as well. How do you manage to make your husband feel he is getting the attention/time he deserves?

When I'm totally stressed out and working on several projects, and I don't have the bandwidth to give my husband the attention/time he deserves, I take a moment now and then to reassure him that things will settle down soon and we'll have more time together. I've found he's most receptive to this message when it's delivered immediately after I've taken a few minutes to blow him.

Do you recommend specific prostate massage toys? Besides dick.

How do you approach people about a three-way without ruining friendships?

I think close sexy friends and the-sex-was-great-but-everything-else-sucked exes make the best "very special guest stars." But if you're worried about ruining friendships, well, don't hit on friends. Hit on strangers. (And remember: A stranger is just a friend you haven't had a three-way with yet. Or something.)

Do you think it's unwise to give and/or receive gay oral sex without a condom?

When we speak of gay oral without a condom — which is almost all of the gay oral out there — we speak of ones that sucked not wisely but too well.

Are anxiety-induced orgasms a thing? They must be, because I have them.

I'm glad there's at least one person out there who's managing to enjoy the Trump era.

I'm a 21-year-old, queer, poly, cis girl who recently got into this whole thing with a coworker at my shitty fast-food job. Long story short, we were having a rad time fucking around in the freezer... until he bashed International Women's Day on Facebook. I stopped getting him off by the frozen meat without an explanation, and I quit my job to go bind books instead. Is it too late to reach out and tell this dude that I dumped him because of his misogynistic online life? And how bitchy can I be?