Savage Love: 'How do I meet a trans woman?' 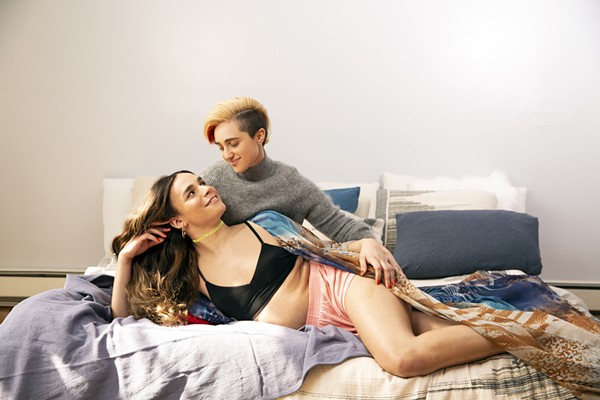 I'm an adult man, and I have developed a trans attraction after following a particular Tumblr blog. That blog is now gone, sadly, since all adult content has been purged from Tumblr. It wasn't just porn; it consisted of all the things I really enjoy — images of oil paintings and antique furniture, scenic landscapes, wild animals, and then pictures/gifs of trans women. Some women appeared to have had top surgery while others didn't. But all of the women featured on this blog had penises. I had never considered a relationship with a trans woman before, but after browsing the blog for a year, I can honestly say I'd do it in a heartbeat. I would actually like to date a non-op trans woman. I know that many trans women don't like having their male parts touched or acknowledged, but I didn't know that a trans woman can only have a functioning penis if she isn't taking female hormones, and I hadn't considered the effect that might have on somebody's gender dysphoria. How can I meet a trans woman who is hopefully comfortable with her male parts and seeking a relationship? I live in a conservative Bible Belt state — Utah — and I am woefully uneducated on this subject.

In fairness, GHMP, you acknowledge being woefully uneducated on trans issues, something your letter demonstrated again and again. But let's start here: A trans woman doesn't have boy parts. She has girl parts — unique girl parts, as girl parts go, but girl parts just the same.

"I'm on hormones and my cock works great," says Jay. "Every trans woman is going to be different and have different experiences, and that's the best first bit of advice I can give GHMP. We can smell it a mile away when we are all being lumped in together as a concept. Treat any trans woman you're romantically interested in as an individual."

As for places to find trans individuals who might be up for dating cis men, well, you might want to sit down, GHMP, as this is pretty shocking.

"I've heard OkCupid is inclusive, and I have friends on there whose profiles even help people navigate discussing their bodies in a respectful way," says Jay. "And finding a trans woman to date who hasn't undergone bottom surgery is pretty easy. The surgery is expensive and even scary to some. It's not terribly common that a trans woman has had that particular surgery."

"The real question is what her relationship is with her current genitals," says Jay. "Maybe she's very dysphoric about them. Maybe she doesn't even want you to see them or touch them. Even if her body is your preference, there's a chance it isn't hers. I personally love my penis and even like talking about it. But bringing up genitals right away can make you seem insensitive or like you're dehumanizing your date."

Jay recommends looking for trans women on mainstream dating apps and then following their lead.

"Now, genitals and curt sexual dialogue are kind of my jam," says Jay, "so I wouldn't even flinch or blush. But this can be a very charged subject for people."

Look to the profiles of trans women you're interested in for cues about their approach to personal subjects. One woman might put it all out there and welcome questions about her experiences as a trans woman; another woman might be open about being trans but prefer not to focus on it.

"Still, never use genital questions as an icebreaker," says Jay. "You'll know when your evening with someone is going well enough that there's a certain amount of trust," and at that point, you may be able to bring it up.

"And please make sure to talk about both of your bodies," adds Jay. "This isn't all about if her body is right for you. Make sure your body meets her standards and preferences, too. I always joke that cis men should have to disclose as well. Any expectation you find yourself putting on her, split the responsibility."

You can find Bailey Jay at her for-adults-only website TS-BaileyJay.com.

And finally, TDE, seeing as you're kinky, you might want to explore mixed kink clubs and spaces, online and off, in addition to gay bars. You'll encounter your fair share of assholes in kink spaces, of course, but kinksters — particularly kinksters in your hipper urban locales — are often more open to trans folks than vanilla types. (Tyler McCormick, a trans man, won the International Mr. Leather competition way, way back in 2010.)

I've fallen into a social group of gay men who are kind of homophobic. They talk about bottoming and gayness as if they're embarrassing things. It's like they're aspiring to be gay people who are really heterosexuals but just accidentally have gay sex. The other challenge is that I find them attractive.

Putting up with assholes just because they're hot — yeah, you're not doing yourself any favors there, TRASH, and you're not doing those assholes any favors, either. Sooner or later, they're going to age out of hot — and if they haven't learned the importance of not being assholes by that point, they're going to be lonely old assholes. Losing friends due to your assholery is an important learning experience for many. Don't cheat these guys of it.