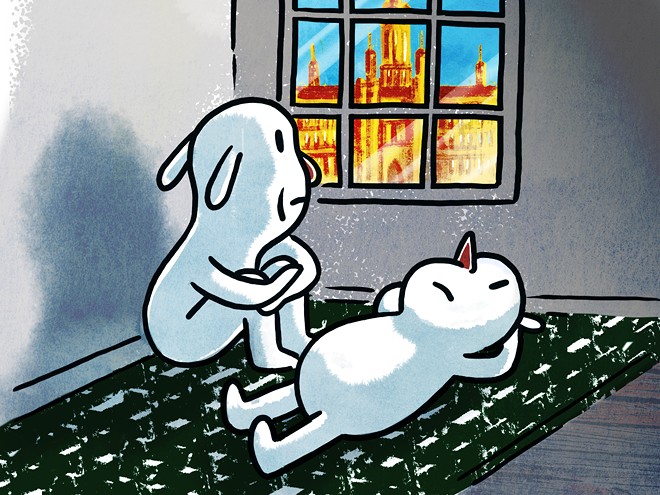 We're an adventurous, bisexual, non-monogamous, opposite-sex couple with a teenage kid living in Europe. We don't really struggle with finding and trying new and interesting stuff in bed. However, we do have a problem, and it’s getting worse. Having sex is, well, weird, when the kid is at home. We can't be loud, we can't watch porn, we can't webcam with other people, we can't do anything involved or time-consuming, like ropes or pegging or foursomes or whatever. We can't even fuck in the shower. When he was little, we had some plausible deniability, but teenagers know exactly what mom and dad do when they shower together. And it's weird and makes us both not want to. And we're not imagining it. Our son frequently reminds us that he can hear everything that happens in the house. Before, we took a lot of it outside or to clubs or other people’s places. And he had sports clubs and sleepovers and vacations at grandparents’, and we could do our thing at home when he was gone. All of that is over now and has been for almost a year. We really like having sex with each other, but it’s just been very quiet quickies during the day while he’s doing school online or waiting for those rare nights when he’s more tired than we are and goes to bed first. It’s been almost a year of this. Way less people want to meet up now, clubs are closed, and traveling is irresponsible. So before we plunge into another year, which as far as I can tell does not look that different circumstance-wise, any tips?

But if you can’t power through your son’s disgust a la Diane and Elliot Birch on Big Mouth — if knowing your son might overhear Dad getting pegged or Mom getting railed on cam is a boner-killer for you and a dehumidifier for the wife — then you’ll just have to resign yourself to quickies for the duration of the pandemic. That means no fucking around in sex clubs for you and no sleepovers at Grandma’s house for him for at least the next six months, CF, if not longer.

We talk a lot about parents who blow up when their children masturbate and parents who melt down when their teenagers ask for contraception and parents who shame their kids for being gay or kinky or sexually active or just sexual. While these asshole parents can’t make their gay kids straight or their kinky kids vanilla or somehow deactivate their sexually active kids, they can do real and lasting damage. The exaggerated disgust of a sex-negative teenager is a lot less likely to do any permanent harm to you or your wife — your son’s disgust is merely and temporarily inhibiting — and you aren’t going to need therapy to solve this problem. You just need him to grow the fuck up and move the fuck out.

In the meantime, CF, go ahead and take those long showers together. And if your son objects — if he shames you — just remind him that the front door isn’t nailed shut and he won’t hear anything if he takes a fucking walk.

My boyfriend and I have been together for four years. I’m 25 years old, and he’s 33. I’m thinking about ending our relationship. I love him, but I don't see it working out. Our sex life is almost non-existent. I have low sex drive and can go long stretches without the need for sex. His sex drive, on the other hand, is very high. I've brought up opening the relationship, but he’s very opposed to the idea. The reason I brought up outside partners besides the sex-drive thing is that we both have different kinks. Some overlap, but a majority of our interests aren't shared.

I’ll be moving to Belgium soon to advance my career. When I told my boyfriend, he said he wanted to go with me because he wanted to be wherever I was. He didn’t say anything about his own goals for the future. He has mentioned to me on several instances that he’d like to write a book, but he hasn’t written a word in all the time we've been dating. He doesn't seem to have any drive or passion, which kind of scares me. Another big issue is that my boyfriend is having serious financial difficulties and declared bankruptcy a few months ago. I was blindsided by this since we don't have combined finances or live together, and he never indicated that he was having financial trouble. As I mentioned earlier, I’m thinking of ending our relationship. I love him, but I just don't know if staying with him is the right thing. I don't want to hurt him, and I don't see things going down well if I break up with him. Should I stay? Should I go?

You haven’t moved in together, you haven’t mingled your finances, you haven’t adopted a houseplant or a dog or a child. Which makes going — leaving your boyfriend when you leave for Belgium — pretty painless and uncomplicated logistically, CAREER, even if it’s still going to be painful emotionally.

You say you love your boyfriend, CAREER, and I believe you. And if everything was working except your boyfriend’s financial issues, I would urge you to give him a little more time — not infinite time — to get his shit together. And not everyone is ambitious for professional success; some people’s ambitions are harder to recognize because they don’t revolve around making money. Two people with no professional ambitions might find it hard to make their way in the world — someone’s gotta pay the rent — but a supportive non-striver often makes a great partner for a striver. And I don’t know if you’ve been following the news, CAREER, but there’s a pandemic on, and a lot of people are struggling financially right now. Your boyfriend isn’t the only person who had to declare bankruptcy in 2020.

But I nevertheless think you should end this relationship. You obviously aren’t sexually compatible, CAREER, and you’re definitely going to wanna explore your kinks — without guilt or encumbrance — once you get to Belgium. Openness is the only way to make it work when two people have a lot of kinks but not a lot of kink overlap. Kinks can’t be wished away or waved off, as much as people like to pretend they can be (and not just vanilla people); kinks are hard-wired, and some outlet — some way to express and enjoy them — is necessary for a kinky person to feel fulfilled and content. You might’ve been able to make the relationship work if your boyfriend were willing to open it up, but he’s not. And you’re not comfortable — at least at this stage of life — with a partner who isn’t a striver. Getting dumped is going to suck for your boyfriend, of course, but he’ll be better off in the long run with someone who comes closer to matching his libido and who doesn’t care that his ambitions, whatever they might be, don’t revolve around his career. And who knows? Maybe he’ll wind up writing a book about your breakup.

Enjoy Belgium, CAREER. It’s a good place for a young gay man to explore his kinks.

Questions? [email protected]. Follow Dan on Twitter @FakeDanSavage. If only this column were a podcast ... Wait, it is! savagelovecast.com.