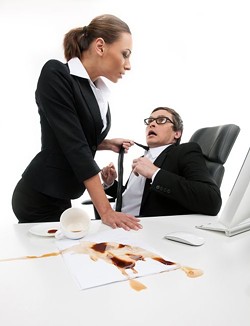 I’m a cute, mostly straight, twentysomething, single and (safely) sexually active woman. This happens to me pretty often: I hook up with a guy, we start fooling around, and we’re both really into it. I reach down, and he’s full sail. Things progress — clothes come off, etc. — and, as is generally the polite order of things, the lady comes first. (This isn’t the problem.) I’m not aggressive, but I’m not shy. I tell a partner what I like and how to do it. They are always happy to oblige. The thing is, after I get off, a lot of times, the guy is limp. (This is the problem.) They usually express frustration and indicate that they’re very much turned on but it’s just not working. Generally after a few times, they will stop having this problem, and we will end up having lots of fun. So I don’t think I’m doing anything “wrong” to kill the boners. I think maybe I’m just intimidating. In fact, I’ve been told so. Why does this happen and how can I reduce the awkwardness? Should I talk about it or just ignore it? And should I keep trying to make him hard? Or will that just make his dick panic worse?

P.S. The more a guy likes me, the more this seems to happen.

So  you go to bed with a guy, he’s at full sail, and then you inform him that you, the lady of the hookup, will be coming first. You instruct him in the art of What I Like & How You Should Do It, and by the time he’s done — by the time he gets you off — that dick has sailed. Or his dick sails are empty. Or something.

Why does this happen? I have three theories …

Theory One: Lots of straight guys make it into their mid-20s without ever having encountered a sexually assertive woman, FEM. A woman who advocates for herself in the sack, who knows what she likes and isn’t too shy to ask for (or insist on) it, can come as a shock to a sheltered, indulged or entitled boy’s dicksystems. And while some deeply insecure guys (guys you wouldn’t wanna waste your time and your twat on anyway) may find your assertiveness off-putting (or sail-emptying or dick-limpening or whatever), it may be the case that even the more secure guys you go to bed with (guys you would wanna lavish your time and twattention on) could be thrown by their first encounter with a sexually assertive woman.

Theory Two: Guys who throw themselves into making it happen for you could be losing their erections because they’re focusing on pleasing you and getting you off. Theory Three: If you’re going home with some guy at 3 a.m. after a night of boozing, and he spends the first 45 minutes eating your pussy, he may be spent by the time you get off.

I’ve been in a relationship with my boyfriend for two years, and we’ve been living together for one. Several times a day, in passing, he reaches his hand inside my shirt and quickly grabs a boob, and then continues on his way. I could be cooking or studying or brushing my teeth, and he just digs in there out of the blue and doesn’t usually even acknowledge me before or after. In bed, he is very considerate and giving, GGG and all that — no complaints. I’ve tried to bring it up two or three times, but he gets offended, so I drop it. Do I have a right to prefer an offhand kiss on the forehead or something more affectionate and less boob-grabby? Is this typical for LTRs? Am I a selfish prude? —Groped Too Fucking Often

It’s a spectacular ass, and I love to grab it. But my husband doesn’t like to be grabbed in certain ways, in certain places, or at certain times. So I don’t grab his ass in those ways, in those places, or at those times — despite how much I like to grab his ass. Because that spectacular ass of his? It’s his ass, not my ass, and he gets to decide when, where, and how it gets grabbed, touched, fingered, fucked, spanked, etc. And I respect his limits because I respect him. Because he’s my partner, not my possession.

Those boobs of yours? They’re yours, GTFO, and you need to communicate to your boyfriend that there are times when you want him to grab your boobs and times when you don’t want him to grab your boobs. Don’t make the mistake of framing this conversation around his feelings. You are not “bringing it up” to see how to come to some sort of understanding or compromise. You’re bringing it up to set a limit. And once that limit is set, GTFO, don’t put up with the boob grabbing. If he leans in to grab your boob, move away, slap his hand, blast him with pepper spray — whatever it takes, in other words, to communicate your displeasure in an unambiguous manner. If he gets offended, let him. If he stays offended, leave him.

I’m a 46-year-old homo who’s fairly content most days living the single life. Since coming out when I was 20, I’ve been in a series of failed relationships and single for the last 10 years. I’m convinced I never really learned how to flirt. I get all tripped up when I see a PYT who I want to talk to. Add to the mix that I was diagnosed in ’91 as poz. I’m so afraid of rejection that I don’t even try anymore. I’m good-looking, outdoorsy, adventurous and free-spirited. I’m not afraid of exploring caves or rappelling off cliffs, but I’m a total wimp when it comes to interacting with a potential mate. I know there are younger guys who are attracted to older guys like myself. I’d love some advice on how to increase my mojo regarding flirting and dating. —Doing It Really Trepidatiously

Nothing will boost your dating mojo like getting laid, DIRT, and that won’t happen if you don’t force yourself to take risks and talk to the next PYT — pretty young thing — who catches your eye. And remember: Lots of twentysomething and thirtysomething PYTs are poz themselves, DIRT, and lots of negative guys are willing to date poz guys. Putting yourself out there may result in some unpleasant rejection from jerks who are freaked out by your HIV status — but you don’t want to date jerks, right?