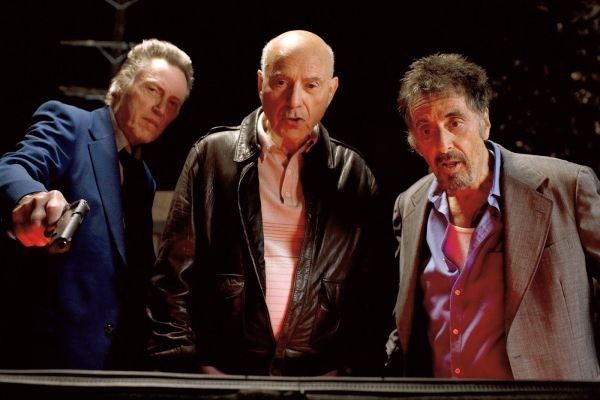 Stand Up Guys: A hackneyed script is spun into gold by three screen vetereans.

Stand Up Guys B-

With its hackneyed gags, schmaltzy sentiment and overly familiar plotting, this slow-paced stroll down fading memory lane has absolutely no business being as thoroughly enjoyable as it turns out to be. Credit, of course, is due to a crew of old pros, both of whom turn in warm, funny and surprisingly tender performances —a pleasant surprise, since you don’t expect much nuance from a pair of actors whose famously hammy excesses have long been a staple of impressionists’ résumés.

Christopher Walken and Al Pacino star as Doc and Valentine, a pair of weathered, small-time crooks looking to go out in a blaze of glory. Twenty-eight years ago, Val took the fall for a botched heist that left a mob boss’ son dead, but he firmly refused to rat out his closest associates, even though it kept him locked up for decades. The old con was probably better off in the joint, as the still-furious boss (Mark Margolis) has ordered Doc to fulfill a contract, and finish off his now-grayed best pal. Resigned to their respective fates, these elderly rascals bust their former wheelman Hirsch (Alan Arkin) out of his nursing home coop, and set out for one last wild night of crime and carousing. Their cantankerous misadventures include breaking into a pharmacy for Walken’s prescriptions, stealing cars, and multiple visits to a brothel that is now run by the daughter (Lucy Punch) of their late madam friend. These May-December transactions between nubile hookers and creaky hoods are even more awkward because Val has popped a fistful of boner pills, a prolonged sight gag that lands the crusty lothario in the emergency room. If you think for a moment that Pacino is even mildly embarrassed to be running around sporting a tent pole in his trousers, then clearly you’ve mistaken him for some other respected thespian that didn’t star in Scent of a Woman.

Arkin, to his credit, seems to be more self-conscious of the silliness around him, but he tucks his head down, and pretty much just does what Alan Arkin always does: elegantly grumble. Walken, meanwhile, could sit back and let his insane, messy, cat-lady hair do all the work, but he lets a nice amount of wistfulness creep through the tough-guy facade.

Owning to their gently bent sense of ethics, the fellas stop to help a newly kidnapped and raped young woman (Vanessa Ferlito) get brutal revenge on her attackers with that old standby: a baseball bat to the groin. Julianna Margulies also gets embroiled in the high jinks as Hirsch’s hospital nurse daughter, and it’s amusing to see her back in scrubs again after her career making role on ER.

In between escapades, the boys frequent an old-fashioned diner, where the friendly and gorgeous young waitress (Addison Timlin) has a secret connection to Doc that is easily guessed, but that I won’t spoil. The scene where Doc gins up the courage to explain what she means to him is legitimately moving, and as finely acted as Val’s visit to a priest’s confessional booth. It’s a scene we watched before countless times, but in Pacino’s skilled hands it feels fresh.