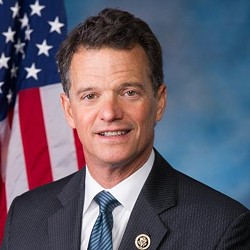 House.gov
Rep. Dave Trott, (R, MI-11)
With the first known female genital mutilation prosecutions in the U.S. playing out in federal court in Detroit, a local congressman is advocating for stiffer penalties for the practice.

In a news release, Trott says the CDC estimates that 500,000 females in the U.S. have undergone or are at risk of female genital mutilation. Recently, Trott says the "staggering statistic" hit home in his district, where federal prosecutors say an area doctor and others carried out as many as 100 female genital mutilations on young girls out of a medical practice in Livonia.

"We must protect our girls, and this legislation increasing the federal penalty is critical to eradicating this barbaric practice from our communities,” said Trott in the release.

The local doctors and affiliates charged in the case are members of the Dawoodi Bohra Muslim sect. Dr. Jumana Nagarwala is accused of performing the genital cutting procedure on at least six girls — four of them from Michigan. She has admitted to removing membrane from the girls’ genitals as part of a religious custom, but says there was no cutting involved.