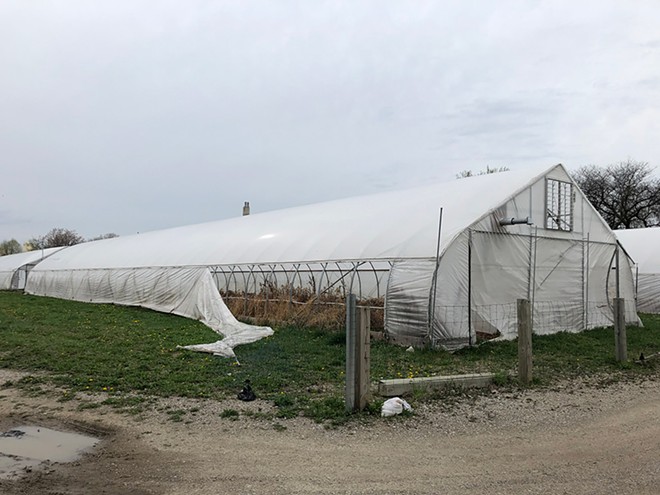 Lee DeVito
On a recent visit, Metro Times found six of the eight hoop houses were empty, filled with dead vegetation and some trash, their plastic walls torn open.

It was disappointing to see RecoveryPark CEO Gary Wozniak go to Crain’s Detroit Business in response to last week’s Metro Times cover story (“Can Detroit’s RecoveryPark recover?”), which concerned his 100-acre farm on Detroit’s east side that was pitched to investors as a way to create jobs for formerly incarcerated people. As the story showed, it never came to fruition. More than a decade after its initial inception the farm is now in ruins, and has no full-time employees who are formerly incarcerated — other than Wozniak himself, who was sent to federal prison in 1988 for stealing more than $800,000 from clients when he worked as a stockbroker.

In the Crain’s article (“RecoveryPark supporters voice concerns over venture,” May 23), Wozniak attempts to discredit the people Metro Times interviewed, including RecoveryPark’s former chief impact officer Anna Kohn, with Wozniak even threatening to call on Gov. Gretchen Whitmer to remove Kohn from two boards she serves on based on a quote from the story that he took out of context.

Others quoted in the Crain's article accused former RecoveryPark investors and employees of acting unethically for starting their own hydroponic farm outside of Detroit after RecoveryPark failed — as if hydroponic farming was a proprietary technology. (It's not.) Furthermore, the employees did not sign non-compete contracts, and the new venture is for-profit and not centered around employing the formerly incarcerated, unlike RecoveryPark, which was a nonprofit with a mission to provide jobs for returning citizens.

Notably, none of the questions raised in the Metro Times story about RecoveryPark's viability were answered.

Anyone who read our article would agree that Wozniak’s energy would be better spent on actually bringing RecoveryPark to the finish line rather than intimidating his critics. The talented reporters at Crain’s can do better.