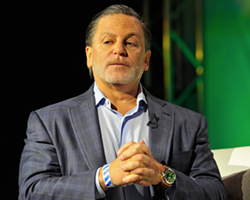 The Detroit Free Press highlights some of the biggest Michigan-based donors for the event. Of note: Detroit-based Quicken Loans put up a whopping $750,000. The Free Press also notes that Gilbert never donated to Trump during the campaign, but had donated to Republican presidential candidates John Kasich and Chris Christie. Curiously, he also donated $75,000 to a joint fundraiser for Hillary Clinton and other Democratic candidates.

Other big Michigan-based donations included $1 million from Dow Chemical, nearly $500,000 from General Motors (which gave nearly $300,000 in vehicles for the event), and $250,000 from Ford Motor Co. The heads of construction company Walbridge and the Suburban Collection each donated $250,000.

The size of Trump's inauguration crowd may have been dwarfed by the one for President Barack Obama in 2009, but when it comes to raising money from the super rich, Trump beat Obama. Trump's $107 million is double that of Obama's inauguration haul, which came in at $53 million.