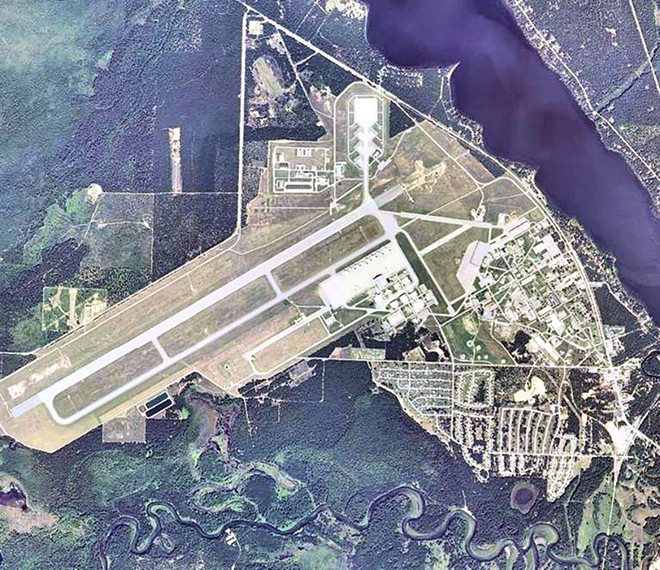 Public domain, Wikimedia Creative Commons
The Wurtsmith Air Force Base operated in Iosco County, Michigan for 70 years, leaving behind extensive groundwater contamination. It has not been designated as a federal superfund site in need of remediation, even though it was proposed back in 1994.

For decades, the U.S. army's improper use, storage, and disposal of chemical hazards in and around its bases have represented a severe environmental risk that irreversibly impacted scores of unsuspecting service members. In cases such as North Carolina's infamous Camp Lejeune Marine Corps Base, contamination went undetected for over thirty years, incurring a heavy toll on thousands of veterans.

From 1953 to 1987, nearly one million troops served at Camp Lejeune, often accompanied by their families. During this time, they were unknowingly exposed to a slew of toxins registering concentrations 240-3,400 times above adequate safety levels, including known carcinogens such as vinyl chloride, benzene, trichloroethylene (TCE), perchloroethylene (PCE), halogenated hydrocarbons, and perfluoroalkyl substances (PFAS).

Before toxins even began registering as an issue, Camp Lejeune's reputation was tainted by the discrimination that the Marine's first Black recruits faced during the base's initial years. African Americans were segregated to the Point Montford facility located on the base's swampy periphery and were regularly the subject of racist abuse from their white superiors and brothers-in-arms. Although desegregation following WWII meant that Camp Lejeune's Black marines were no longer restricted to Point Montford, they couldn't foresee that it also meant they would be stationed in areas around the base where contamination ran rampant.

Even after decades of progress, African Americans serving in the armed forces still face higher toxic-related injury risks. Despite making up 19% of all enlisted personnel, African Americans represent only 9% of U.S. army officers. In turn, Black service members overwhelmingly serving in lower-ranking positions spend more time surrounded by various health hazards in contaminated areas as part of their regular tasks.

During the 20th century, land in minority neighborhoods was drastically undervalued due to discriminatory redlining practices. As a result, such areas became cheap options for situating industrial facilities, ports, traffic routes, army bases, landfills, and other pollution hotspots with no regard for public health. Unwittingly, the army became complicit in a pervasive pattern of discrimination affecting disenfranchised ethnic communities known as "environmental racism."

In Michigan, events like the 2014 Flint Water Crisis that exposed 100,000 people to lead in the public water supply are still fresh in residents' memories. On top of industrial pollution and institutional neglect, the army's reliance on toxic substances represents an additional environmental risk factor for vulnerable communities living close to contaminated bases.

For decades, using aqueous film-forming foam (AFFF) containing high concentrations of PFAS (expressed in parts per trillion/ppt) was standard practice in firefighting training scenarios and extinguishing challenging jet fuel fires. By the time the substance's toxicity became apparent, over 700 military bases across the U.S. were contaminated to varying degrees, with Michigan hosting 10 such locations.

Wurtsmith Air Force Base ranks as the state's most affected military installation, operating for 70 years until it was closed in 1993. Analysis of the base’s premises uncovered similar toxins to Camp Lejeune, including TCE and vinyl chloride, among other hazards, and even higher levels of PFAS (213,000 ppt). Contamination around the base is so extensive that state authorities enacted “Do Not Eat” advisories applicable for fish and deer native to the area.

However, unlike Camp Lejeune, none of Michigan's contaminated bases are classified as one of the 68 superfund sites in the state, even though Wurtsmith AFB has been proposed as far back as 1994. Moreover, the Department of Defense's (DoD) unwillingness to admit its role in the contamination crisis prevents vital comprehensive remediation efforts from being undertaken.

In the U.S., race and ethnicity remain the primary indicators of toxic exposure risks, with recent studies highlighting that African Americans are exposed to 56% more airborne hazards than they produce. Additionally, air pollution holds an increased correlation with a higher incidence of covid mortality, a concerning fact given that Black individuals are prone to respiratory illnesses.

In 2020, Michigan imposed the lowest PFAS levels in the country, serving as an example for the EPA, which followed suit in June 2022 by reducing its lifetime health advisory recommendations for PFAS to virtually nothing. Other programs, such as Biden's Justice40 project, aim to ensure environmental safety by directing 40% of future climate investments towards minority communities vulnerable to pollution and toxic exposure.