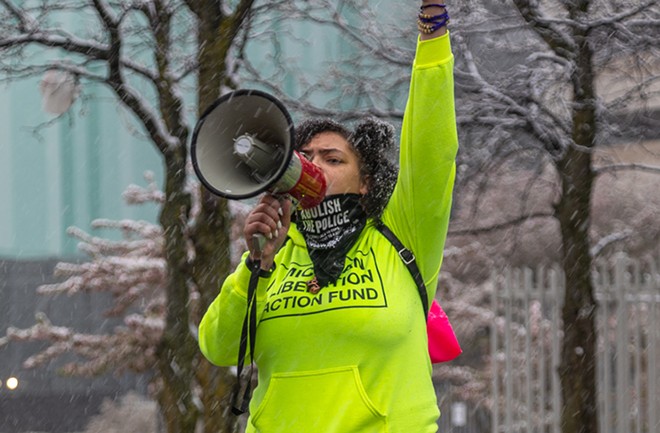 Rusty Young
A person wears a mask that says "Abolish the Police" at a gathering of Detroiters reacting to the news that former Minneapolis police officer Derek Chauvin was found guilty on all counts for the murder of George Floyd.

My name is Ryan Herberholz. I have lived in Detroit for more than a decade — I am an artist and a Wayne State graduate who cares deeply about this city. On April 18 Mitch Albom penned a column in the Detroit Free Press titled, "Careful what we wish for in eliminating the police." This op-ed outlines the kinds of false conclusions that people who remain willfully ignorant of what the phrases “defund the police” and “abolish the police” entail.

The article begins with, "When U.S. Rep. Alexandria Ocasio-Cortez was asked last summer what society would look like with defunded police, she naively answered, 'a suburb.'" As Albom continues the article by constructing an argument held together by intentional misrepresentation, downplaying police violence, and false conclusions, what becomes clear is his own naiveté, which seems to be informed by his status as a wealthy white male with unexamined racial bias and deep willful ignorance. Albom specifically selected the above quote to seize an opportunity to insult AOC in a familiarly patriarchal fashion before launching a reactionary attack against anti-police violence activists, but if he had made the correct comparisons to examine the relationship between police funding and police violence he may have realized that AOC’s words completely undermine his argument and also more accurately reflect reality.

Albom asserts that the “relationship between criminals, citizens, and police is fairly basic. The weaker the police become, the more emboldened the criminals become, and the more endangered the citizens become.” Of course this assertion is proved completely false when you make comparisons between the U.S. and basically any other wealthy democratic country in the world — which I will get to. Instead, Albom’s evidence for this assertion is his deeply problematic and anecdotal comparison of the U.S.’s and Haiti’s policing. Haiti is politically unstable, plagued by corruption, and impoverished — some of the issues facing Haiti have indeed been worsened by U.S. military and special forces interventions. So it is very curious that Albom’s pithy conclusion to what would happen if the U.S. began the process of defunding, abolishing, and replacing the police is simply, “Oh, yeah. What we’re seeing in Haiti.”

According to the Council on Foreign Relations, countries including Canada, Australia, Netherlands, New Zealand, Germany, Japan, Iceland, and Norway all spend less money than the U.S. on policing, and none of them come anywhere close to having as many of their citizens killed by police. (Only one person has ever been killed by police in Iceland.) None of these countries have more crime than the U.S. Their citizens are not more endangered by criminals — but they are vastly less endangered by police.

Albom seems to intentionally avoid any useful comparisons, and although this is an op-ed, he should not have permitted himself to offer such scant evidence in support of his opinion. Albom does seize on the number of civilians killed by police each year (around 1,000 according to various sources), but only to compare that number to the millions of police interactions that occur in order to downplay the problem. He then goes on to justify preventable deaths at the hands of police by explaining, “That’s 1,000 a year killed — many of whom are armed, threatening, or committing a crime at the time — in a nation of 330 million.” It’s important to note the words he chooses here — “armed, threatening, or committing a crime.” People have become all too familiar with the kinds of items victims of police violence can be “armed” with that may result in their death — Tamir Rice’s toy gun, Laquan McDonald’s knife, Stephon Clark’s cell phone, and most recently 13-year-old Adam Toledo, who the police only thought was armed at the moment of the shooting. Describing a victim killed by police as “threatening” to excuse police violence is even more deeply problematic, as it has been made clear from countless hours of police testimony that being a person of color is the only requirement necessary to be considered “threatening” to law enforcement. Finally, the commonplace practice of pretextual stops is all that needs to be cited to reason why “committing a crime” should not result in anyone being murdered by police. Daunte Wright’s shooting, which came after he was pulled over for having an air freshener hanging from his rearview mirror, serves as a reminder that any small violation can result in the death of an unarmed Black man.

For the vast majority of anti-police violence activists, defunding and abolishing police are only the first steps in replacing violent police forces that act with almost absolute impunity. Many activists envision some combination of mental health professionals, social workers, and other community groups that will protect, serve, and be held accountable by the communities in which they work — and hopefully live in, too.

The specifics on which tools, methods, and personnel should be utilized toward these aims varies, as it should, to meet the needs of different communities. Wealthy suburbanites that are privileged enough to hire private security forces to police their gated communities are not often murdered by those security forces. I doubt that small ordinance violations bring these folks in frequent contact with their private security. While the main job of private security is the awful pursuit of protecting property over human life and keeping people out of a given area, it would seem that the people who live in these communities are somehow able to be protected and served by their security without being murdered by them.

Albom, like so many others, chooses to falsely believe that the ultimate goal of defunding or abolishing the police is complete chaos and absolute impunity for criminals. It’s difficult to believe that these are seriously held beliefs. Albom advocates for the same reforms, increased training, and policy changes that activists have been demanding for decades, while predictably offering no new solutions to the problem of police violence. His column blithely asserts that continued appeals to authority will eventually allow the good to prevail. What he writes in this column is a fiction just as bereft of any analysis of systemic injustice in the real world as any novel he has penned.