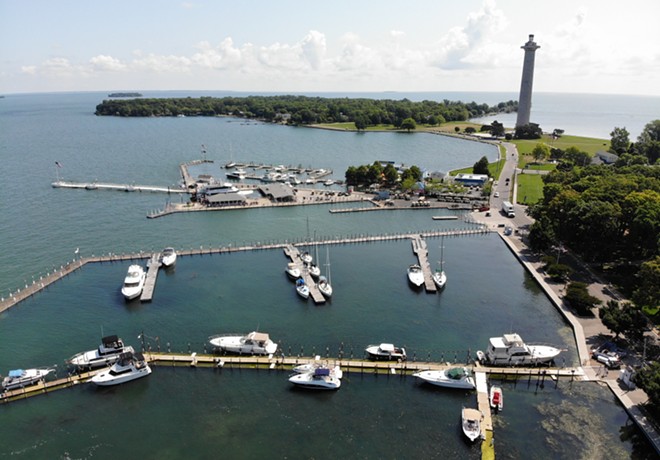 Two Wayne County residents have filed a federal lawsuit against the Village of Put-in-Bay in Ohio and three former members of its police department, claiming they were assaulted and falsely imprisoned while on a family vacation on Memorial Day weekend.

Monica Gulledge and Lyle Taylor, both of Westland, were at the Put-in-Bay Resort Hotel, where they were registered guests, when police spotted an overturned golf cart that was being used by Gulledge’s friend. Put-in-Bay is a small village on South Bass Island that hundreds of thousands of visitors in the summer.

Lt. Michael Russo, who has since resigned, “never made himself known and suddenly and without warning, assaulted Monica from behind, body slamming her to the ground, furthermore defendants also wrongfully and illegally assaulted, detained, and placed Lyle in handcuffs for no reason other than being there with Monica,” the suit states.

Cpl. Terry Rutledge Jr. and Officer Dwayne Webb illegally detained Taylor and placed him in “excessively tight handcuffs for no other reason other than he was there with Gulledge,” according to the plaintiffs’ attorney Ven R. Johnson of Johnson Law PLC in Detroit.

“Lt. Russo has a history of using excessive force both in Put-in-Bay and while serving in the Maple Heights, Ohio, police department,” Johnson said in a statement. “The Village of Put-in-Bay was negligent for hiring him. The village also breached its duties in policies, regulations, and lack of training exhibited by the recklessness of the three officers who deliberately, and without probable cause, arrested my clients after using excessive force to detain them. This behavior is unacceptable for anyone, let alone those who we trust to serve and protect.”

Johnson said the Put-In-Bay Police Department has a history of making false arrests and using excessive force. In fact, Johnson also filed a lawsuit last week against the department on behalf of four Sandusky residents, alleging they were unlawfully arrested on June 6. Russo is accused of pointing his firearm at the plaintiffs and threatening to shoot them. Russo and Rutledge are both listed as defendants. The incident was caught on video.