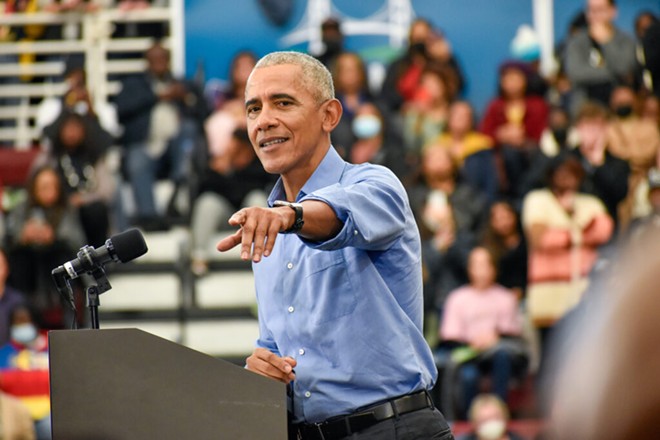 Andrew Roth/Michigan Advance
Former President Barack Obama speaks at a rally with Gov. Gretchen Whitmer and other Michigan Democrats in Detroit on Oct. 29, 2022.

In the packed gymnasium of Detroit’s Renaissance High School, the Michigan Democratic ticket rallied alongside former president Barack Obama on Saturday, asking supporters to bring their friends, family and neighbors to the polls.

With 10 days until the election, the candidates and officials emphasized the importance of voting rights, abortion and other key policy issues.

Whitmer, Benson and Nessel focused on their in-office accomplishments, while targeting their opponents’ opposition to abortion rights and their denial of the legitimacy of the 2020 election that former President Donald Trump lost to President Joe Biden.

Instead of celebrating a record 5.5 million voters in the 2020 election, Michigan has served as ground zero for an organized attack on democracy, Benson said.

Nessel blasted DePerno for supporting a ban on abortion and opposing to contraception, having compared Plan B, known as the morning after pill, to the deadly narcotic fentanyl.

Multiple speakers criticized Karamo’s recent lawsuit which would require in-person voting in Detroit, as well as a similar lawsuit filed in Flint filed by the Michigan GOP and Republican National Committee alleging the city didn’t hire a sufficient number of Republican election officials.

That would appear to violate Michigan’s Constitution, as no-reason absentee voting is guaranteed under Proposal 3 of 2018.

“The new strategy is to cancel the votes of people who don’t agree with you,” Duggan said.

In his speech, Obama praised Whitmer’s performance as governor and reflected on differences in the political landscape during his 2008 presidential campaign and the polarization of the Democratic and Republican parties today.

“People did not agree with me, but I could go into communities, mostly Republican, mostly conservative, and I could have a conversation,” Obama said.

“If [Republicans] get control of Congress, they’ll spend the next two years investigating their political opponents,” Obama said. “How is that going to help you and your family?”

Obama also discussed the danger and divisiveness of political conspiracies pointing to the recent violent attack on Paul Pelosi, part of an attempt to target U.S. House Nancy Pelosi (D-Calif.).

“We’ve got politicians who work to stir up division to try to make us angry and afraid of one another for their own advantage,” Obama said. “Sometimes it can turn dangerous.”

Obama was heckled during this point and the man was removed from the audience.

“This is what I mean,” Obama said. “… You wouldn’t do that a workplace. It’s not how we do things. This is part of the point I want to make. Just basic civility and courtesy works.”

The former president also referenced a conspiracy theory shared by Dixon on her former right-wing talk show that Democrats have been working to topple the United States as retaliation for losing the Civil War as reported by CNN.

If your plumber was trying to tell you about the latest conspiracy, you’d find another plumber, Obama said.

Originally published on October 30, 2022 on Michigan Advance. It is shared here with permission.