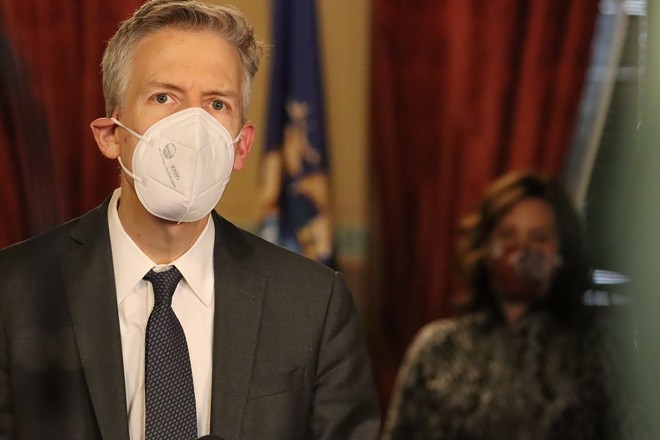 State of Michigan
Robert Gordon, director of the Michigan Department of Health and Human Services.
Anti-lockdown protesters and supporters of President Donald Trump have been targeting Michigan officials, gathering outside their homes at night and leaving them rattled.

The latest event came Tuesday evening, when protesters gathered outside the Lansing home of Robert Gordon, the director of the Michigan Department of Health and Human Services.

In a video posted to social media, a group of more than a dozen chanted "Open up now!" Others were seen in the video claiming that COVID-19 is a hoax and expressing anti-vaccination sentiments, the Detroit Free Press reports.

Gordon denounced the protesters in a statement on Wednesday.

"This is America, and I believe strongly in Americans’ right to protest. Last night was something different: people came to my home in the dark of night, screaming through bullhorns, scaring my children, and trying to intimidate me. That is wrong, and, in case anyone is wondering, it’s a waste of time," he said.

"We are going to keep following the proven, science-based steps to save lives and get Michigan through this pandemic. I know it’s challenging for everyone, especially for small business owners, but it is what is necessary for us to get to the other side with as many of our loved ones as we can," he added.

MDHHS issued restrictions that prohibit gatherings and indoor dining at restaurants through Dec. 20 as Michigan sees a spike in COVID-19 cases. The restrictions seem to be working — the state saw a 31% drop in cases over the past two weeks, according to the New York Times.

Earlier this year, protesters also gathered outside the home of Governor Gretchen Whitmer and inside the Capitol Building in Lansing. Some of the armed protesters who stormed the Capitol were later revealed to have been part of an alleged FBI-thwarted plot to assassinate Whitmer, while others connected to the plot were alleged to have targeted the homes of police officers.

Earlier this month protesters targeted Michigan Secretary of State Jocelyn Benson over the state's election results, which they alleged without evidence were rigged. Benson called the protest an act of "intimidation."

Michigan Attorney General Dana Nessel said Wednesday that there are ongoing investigations into threats made against public officials.