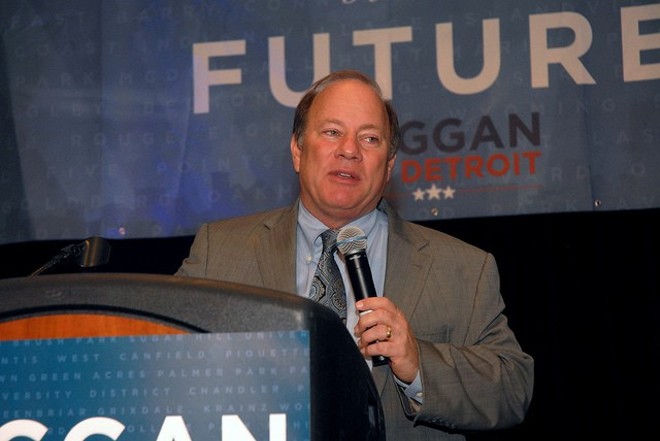 Metro Times examined campaign finance records filed with the Michigan Secretary of State and found donors’ cash is being funneled through the Duggan Leadership Fund, the mayor's independent PAC.

Beyond that, a look at Duggan’s candidates’ campaign finance records shows that some of the state’s wealthiest and most powerful individuals and lobbies are donating directly to the candidates’ campaigns. That includes the auto insurance industry lobby, health insurance execs, charter school executives, DTE Energy, and a variety of developers and CEOs from industries across the board. Many of those are Duggan allies.

This comes after Duggan vowed to campaign against State House Democrats from Detroit who voted against an auto insurance reform bill he crafted with Republican House Speaker Tom Leonard. The bill provided no guarantees that it would lower insurance rates, and all but four Democrats voted against it. Duggan will likely push a similar bill next year. In the meantime, a new nonprofit called Detroiters For Change is campaigning for Duggan's auto insurance plan and placing ads in support of the mayor's candidates. It doesn't have to report its donors.

The donations raise questions about whether the candidates will be influenced by their donors and protect corporate interests over residents' interests, if they are elected. The candidates are all running in the Aug. 7 primary. The Detroit districts are Democratic strongholds, so whoever wins on Aug. 7 will likely beat their Republican challenger in November.

Donors who gave between $2,000 and $10,000 to Duggan’s PAC include companies or executives from companies like Comcast, Flagstar Bank, DTE Energy, Blue Cross Blue Shield Of Michigan, Henry Ford Health System, Lear, Ciena Healthcare, and more. Other donors include companies like Amazon and controversial landlord Dennis Kefallinos, who was cracked down on by the city last year for his dangerous buildings.

The revelation that powerful corporations and wealthy Republican donors are partly funding Duggan’s Democrats in State House and Senate races puts their campaign in contrast to those of their grassroots, progressive opponents who are taking far less — if any — corporate PAC money. That’s important to a growing number on the left who are tired of seeing the party beholden to the interests of the rich and corporations.

Many of the more progressive state level Democrats are also campaigning on pledges to enact new laws that reduce the amount of corporate PAC money in elections, or go to a “publicly funded” campaign funding model which would remove corporate money from elections altogether. Among those are Abraham Aiyash, a progressive candidate running for the Michigan Senate’s 2nd district, who has pledged not to take corporate PAC money. He’s running against Duggan’s candidate, Adam Hollier, whose campaign is partly funded by the auto insurance lobby, Republican donors, health insurance execs, charter school execs, and Duggan’s PAC, among others.

Craig Mauger, director of the nonprofit, nonpartisan Michigan Campaign Finance Network, says it's not unheard of for Republicans to donate to Detroit candidates who are more aligned with their positions, and "leadership" PACs are a recent phenomenon that are becoming more common.

"Why? That's because they allow donors to make unlimited contributions to office holders, and the office holders use that to fund candidates, and you can see Duggan is raising hundreds of thousands of dollars," Mauger says

Duggan's spokesman didn't immediately return a request for comment. The corporate-backed Democratic candidates who are benefiting from Duggan’s fundraising machine include:

Senate 2 — Adam Hollier (Grosse Pointes, parts of Detroit, Hamtramck, Harper Woods, and Highland Park.) Hollier reported raising about $120,000 so far. Some of his top donors and their donations include $15,000 from the Duggan Leadership Fund; $16,000 from controversial multi-millionaire Detroit tree farmer John Hantz and his company’s executives; $2,000 from the Detroit Chamber of Commerce, which represents powerful business interests; $1,000 from the Automobile Club PAC, which is funded by the auto insurance industry and largely gives money to far right wing Republicans like Bill Schuette and Gary Glenn when it’s not funding Duggan’s candidates; a long list of wealthy executives and lobbyists from companies like the charter school company Leona Group, DTE Energy, and Detroit polluter U.S. Ecology.

Senate 3 — Sylvia Santana (Dearborn, Melvindale, and parts of Detroit.) Santana reports raising about $112,000. Some of her top donors and their donations include the Michigan Insurance Coalition PAC, which is funded by the auto insurance industry and largely funds Republicans when it’s not funding Duggan’s candidates. Other large donors include DTE Energy, Delta, CSX Corporation, Henry Ford Health System, AT&T, and more.

Senate 4 — Marshall Bullock (Parts of Detroit, Allen Park Lincoln Park, and Southgate.) Bullock reports raising about $52,000. Some of his top donors and their donations include $10,000 from the Duggan Leadership Fund; $2,000 from former Detroit Medical Center exec, Reginald Eadie; $1,000 from the Automobile Club PAC, which is funded by the auto insurance industry and largely gives money to far right wing Republicans when it’s not funding Duggan’s candidates; $1,000 from the Heritage Vision Plans insurance company; and more.

House 2 — Joe Tate (Parts of Detroit, Grosse Pointe, Grosse Pointe Farms, and Grosse Pointe Park.) Tate reports raising $25,000. Some of his top donors and donations include $1,500 from Peter Meijer of the Meijer family, who now works for the Ilitch family's Olympia; $1,000 from the Detroit Regional Chamber, which represents big business interests; $1,000 from charter school director Kyle Smiley; $1,000 from Gabriella Meijer; $1,000 from the Michigan Health and Hospital Association; and more wealthy CEOs.

House 4 — Rico Razo (Parts of Detroit and Hamtramck.) Razo reported receiving $58,000 in contributions so far. His top donors and donations include $5,000 from the Duggan Leadership Fund; $1,000 from a DTE Energy exec; $1,000 from the Automobile Club PAC, which is funded by the auto insurance industry and largely gives money to far right wing Republicans when it’s not funding Duggan’s candidates; $500 from an exec at charter school company, The Leona Group; and more developers, consultants, and wealthy CEOs.

House 6 — Terra DeFoe - (Parts of Detroit, Ecorse, and River Rouge.) DeFoe reported raising $53,000 so far. Some of her top donors and their donations include $2,500 from the Duggan Leadership Fund; $1,000 from Birmingham businessman John Levy; and $1,000 from West Bloomfield development partner Tiffany Irving.

House 9 — Karen Whitsett (Parts of Dearborn and Detroit.) Whitsett reports receiving about $18,000. Some of her top donors and their donations include $4,500 from the Duggan Leadership Fund; $3,000 from Birmingham and West Bloomfield-based financial industry execs and their family; $1,000 from the Automobile Club PAC, which is funded by the auto insurance industry and largely gives money to far right wing Republicans when it’s not funding Duggan’s candidates. Otherwise Whitsett’s contributions are mostly from small sources.

House 10 — Leslie Love (Parts of Detroit and Redford Township.) Love reports raising about $23,000. Some of her top donors and their donations include $3,250 from Blue Cross Blue Shield; $2,050 from Automobile Club PAC, which is funded by the auto insurance industry and largely gives money to far right wing Republicans when it’s not funding Duggan’s candidates; $1,000 from the Business Leaders for Michigan PAC, which funnels money from large and multinational corporations into local races; $1,450 from DTE Energy; $750 from Frankenmuth Insurance; $500 from AT&T; and multiple large donations from unions.

The biggest beneficiary of Duggan’s PAC’s resources, however, was the catering department at the Book-Cadillac Westin, to which Duggan’s crew paid $18,000 for food at two events. The PAC also paid its employees around $73,000 over six months.

A 2017 Motor City Muckraker report found that corporations and wealthy individuals from outside of Detroit accounted for about 90 percent of campaign contributions to Duggan's mayoral campaign.