Mulenga and the banjo 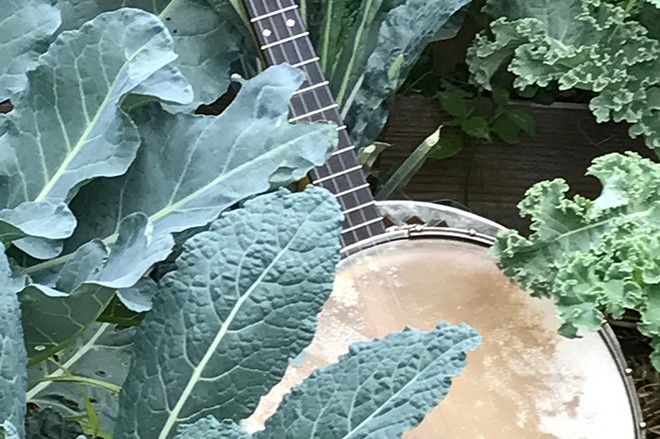 I came home and heard what sounded like banjo picking coming from my backyard. So I walked up the driveway and there was Mulenga Harangua, standing in the garden and plucking away at the instrument.

"Hey Mulenga, I'm going to call the police and report a black man playing the banjo in my yard," I said. "Just like that woman called the police on a brother who sat in his car listening to a yoga CD while waiting for his class."

Mulenga stopped and gave me a big grin. "They won't come for that," he said. "A black man with a banjo is nonthreatening. When is the last time you heard of a brother getting shot by the police because they mistook his banjo for a gun?"

I held my hands up and shrugged. He had a point. Mulenga smiled an even bigger smile and strummed a chord — the tomato leaves seemed to vibrate with the sound.

"First of all, it fucks with people's heads because they just don't expect to see a black man with a banjo," he said. "Once they get their heads around that, suddenly they're pacified by visions of cotton fields and mammies, and they start moving in slow motion. That's the moment to take advantage of before things go crazy. Make your getaway."

"So are you going to play some bluegrass music?" I asked.

"Oh, I dibble and dabble," Mulenga said, playing a few Western swing chords. "Nothing wrong with bluegrass. Bill Monroe, the biggest name in bluegrass, was influenced by a black bluesman. But what most folks don't know is that the banjo was derived from instruments made by enslaved West Africans."

"Hmm, so it's kind of ironic that these bluegrass and country musicians, whose audiences are extremely white, are playing with something from Africa," I said.

Mulenga nodded and picked a few more notes, stopped, and pointed. "You've got a groundhog over there."

I looked up and there it was, just about to chomp on a cucumber leaf. Apparently the creature didn't care for the leaf, stopped eating, and waddled over to the fence to climb into the next yard.

Mulenga continued. "It's also pretty ironic that the banjo is the magical thing that makes me nonthreatening to white people, when it's about the most African thing out of all the things I could be carrying," he said. "It's like having a voodoo root or something."

"Well, I guess that brother in Memphis should have been wearing some magic African socks when that property manager called the police on him for wearing socks in the pool," I said.

"Who knows, it might have helped," Mulenga shrugged. "Truth is, I feel for the brother. He probably didn't want anyone to see his raggedy toenails. I know if I showed my toenails to some folks they'd be calling me ape-foot or something."

"Well, the lady who called the police on sock man lost her job," I chimed in.

"Damn straight, Mulenga said. "And there's the Subway employee who called 911 on a black family when they were using the bathroom too much. She got placed on leave."

"There you go," I pointed out. "Black people causing trouble for her even when she is trying to do the white thing."

"I swear that white people are scared of black people even when we're spending money," Mulenga said. "You notice the Subway employee didn't call the police before they bought their sandwiches."

"But they will call the police when you're trying to make some money," I said. "Did you see where somebody called the police on an 11-year-old kid who was delivering newspapers? That's working while black. How can it get any worse?"

"And then you got that congresswoman in Oregon who was going door to door and some white lady called the police on her," I said. "Campaigning while black. Pretty soon the problem is going to be breathing while black."

"Well, it's come to that," Mulenga pointed out. "The brother who was sitting in his car listening to a yoga CD while waiting for his class to begin was doing breathing exercises."

"You know," I said. "A common thread through all of this and incidents regarding Latinos is this sense that we don't belong; that we shouldn't be there. It's like segregation with no dark people allowed. You aren't allowed to share in the common goods of this nation."

"Tell me about it," Mulenga testified. "I've been doing my own little experiments just to see how far this can go."

"Yeah," Mulenga said. "I've been going out to Grosse Pointe and letting myself be seen."

"You are letting people see you?" I couldn't believe it. Mulenga's been vanishing around white people for decades. I don't know how he does it, but when he wants to vanish he can vanish.

"So what I do is I'll walk around to see if someone calls the police on me for being in a white space," Mulenga said. "For instance, one time I had an ice cream cone. I was just standing there licking it when a woman called the police. She told them I was taking long, slow licks and it looked like I was casing the place and that there was something vaguely sexual in the licking. Police said they were coming, so I vanished right off. No sense taking these things too far."

"So now you're teasing them with your powers," I said. "I've never known you to play around with that. I thought you were serious."

"I am just doing research," Mulenga said. "So the next week I went back with my banjo. The same woman came out with a big smile, gave me $20, and told me that her favorite uncle used to play the banjo."

"So all this is for science?" I asked.

"Then you certainly didn't accept her money," I said.

"Remember when we were kids and we helped that old lady move some boxes around in her garage?" Mulenga said. "She offered us a dollar and I told her she didn't have to pay us. Then later you told me if somebody offers me money then I should take it."

"Well, it has since been my policy to take money when people offer it to me," Mulenga said. "Besides, somebody has to fund the research."

"So what do you call this little experiment?"

"I call it 'The Banjo as a Factor in Saving a Brother From Arrest for Just Being There.'"

"That is indeed a weighty subject," I agreed. "But couldn't your vanishing technique work better to save lives? It's kept you going all these years."

"My skills have been developed over decades of training," Mulenga patiently said. "I can't teach this stuff in an afternoon. Besides, I'm too paranoid to let anybody inside my life. Carrying around a banjo is much simpler. It's something anybody can do. I think you should give it a try."

Mulenga set the banjo down among the vegetables and stepped in the direction the groundhog had gone. I looked at the banjo to see if it was crushing the plants. Then I looked up to Mulenga... but he was gone.