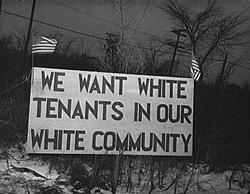 THE PAST IS STILL THE PRESENT

I always tell myself not to read the comments. Listen, dearest white people, who seem to know oh-so much about Detroit history and racism: You obviously don’t. Keep telling yourselves that the media is being negative or that black people ruined Detroit. But by doing so, you’re basically repeating the patterns of the past that you think are gone, or that black people have somehow brought upon themselves. I would love to force you to actually know the history, or how systems of power work, but since I can’t, I’ll just make sure it’s clear that you’re wrong and that many of these comments are grotesque.

Mr. Parks sounds like a terrific person. Hardworking, funny, realistic, caring toward customers, employees, and the community. The kind of business owner and citizen that should be valued and supported by customers, neighbors, and city services. He is a great model for others to follow. I wish him all the success he deserves. Thanks to MT for this excellent interview.

As an employee of Detroit Public Schools, I don’t disagree with the ramifications stated for having a school district with the reputation that DPS has. That said, Lessenberry makes sweeping statements that imply that the entire district is made up of incompetent fools. There are many great teachers and a handful of great schools in DPS. Such broad applications feed negative, defeatist ideas about DPS. Oh, and any pre-K teacher in DPS (and many of their Facebook friends) could tell you about the Head Start fiasco — it doesn’t take expert journalism to uncover that.

I usually enjoy Lessenberry’s columns, but this one saddens me.

DPS has some of the most dedicated and hardworking teachers out there. Please do not assume we are all lazy and incompetent. Many of us arrive early, work throughout any “break” or “lunch,” stay late, work after-school programs, etc. … Do not lump the majority of excellent educators in DPS with the few that are ineffective.

I am highly insulted.

We received a number of responses to Brett Callwood and Lee DeVito’s story about Flint and what it has to offer visitors.

Great article! A great point to make. Flint is the “Vehicle City” because we are the original home of the horse-drawn and motor car, not Detroit. GM started in a lovely little place in Flint now called the Durant Dort Building. It is here that people like David Buick and other well-known names met and started car companies that took over the horse-drawn carriages that we were primarily known to produce. Before there was a “Motor City,” you had to have the “Vehicle City” and its people as the catalyst.

Thank you for this thoughtful article! I love my city. I know we have problems — but generally, living here has treated me much more kindly than the other places I have lived before here. Most of the people I meet every day are sincere and likable; if you serve them with a smile, most everyone smiles back at you. I love the way that my children’s school is very quick about instances of bullying, and have zero tolerance for it. There are so many issues, yes — but, I will take them all for the love I have found here, and the friendships I have made along the past 10 years of living in this city.