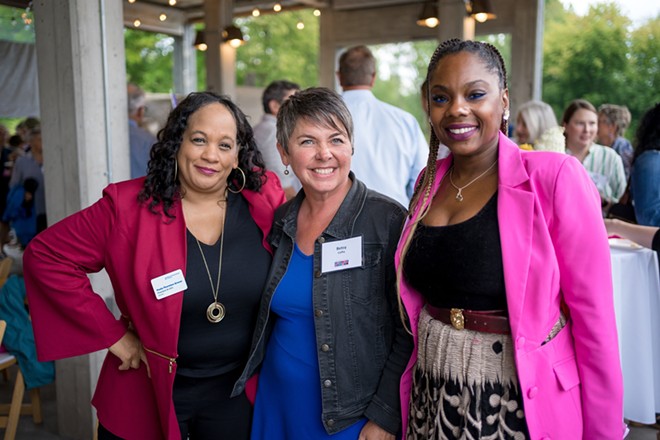 Antrim County is a GOP stronghold in northern Michigan, best known as being home to the tourist destination of Torch Lake, as well as one of the most-enduring conspiracy theories about the 2020 election.

But in an unlikely turn, the county could be represented in the Michigan House by a female Democrat next year, Cathy Albro. The odds of that happening have risen after state Rep. John Roth (R-Traverse City), the Republican nominee, allegedly failed to register on time as an elector in the newly redrawn 104th House District.

That’s a unique situation, but Albro is one of several Democratic women running for legislative seats in traditionally red northern Michigan who are vying to get equal representation in lawmaking, and many who are fired up by Roe v. Wade being overturned.

But getting more women in office doesn’t happen without some elbow grease, said state Rep. Laurie Pohutsky (D-Livonia), who chairs the executive committee of the Michigan Progressive Women’s Caucus.

“Anecdotally speaking … we have to work a lot harder than the male candidates,” Pohutusky said. “In reality, I feel like I have to know a policy inside and out because I’m starting from a place where people don’t think I’m as competent as a potential male counterpart. … There’s an inherent sexism there that we know we have to fight against and I think it ends up making a more impressive candidate and elected official.” 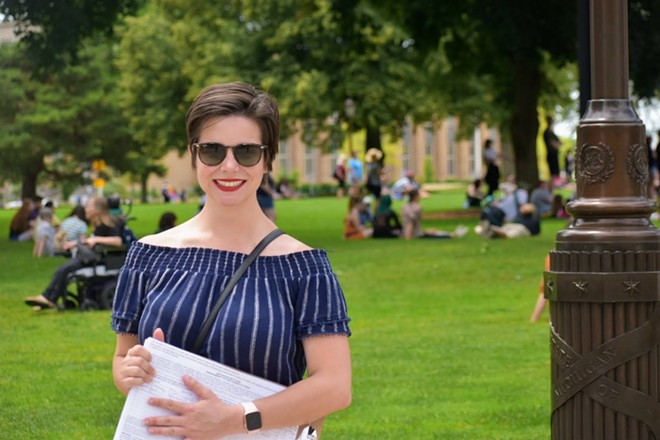 Roth recently moved to Green Lake Township in the 104th House District in Northwest Michigan to avoid running against another incumbent after legislative maps were redrawn this year.

According to state records, Roth, who was initially drawn into the same district as Rep. Jack O’Malley (R-Lake Ann), didn’t register “as a qualified elector of the district he or she represents by the filing deadline,” in his new district — something required in state law to make it on the ballot. The deadline for candidates to file was April 19.

To be considered a “qualified elector,” Roth is required to be registered as a resident of the new district for at least 30 days.

The Secretary of State’s office didn’t catch the error before the primary election on Aug. 2, and the question of whether or not Roth will be on the November ballot will likely be decided in court.

According to state election Law, if Roth is thrown off the ballot, he could still run as a write-in candidate or the local Republican party can nominate another candidate, or potentially re-nominate Roth, through a convention vote. However, time is ticking, as the Secretary of State’s deadline to certify general election ballots for county clerks at 5 p.m. Friday.

Albro, a Democrat from Bellaire, ran uncontested in the Aug. 2 primary.

Albro said she has talked with the Michigan Democratic Party and said they are “working on a legal response.” The MDP did not respond to a request for comment for this story.

Long before the controversy, Albro decided to run in hopes the county could find some middle ground after the controversy. Antrim County briefly showed President Joe Biden ahead of former President Donald Trump after the 2020 election, an error that was quickly corrected. However, Trump supporters, led by GOP Attorney General nominee Matt DePerno, still launched a lawsuit regarding election results, which was dismissed last year.

“If we don’t try, we don’t ever win,” Albro said. “The main reason I’m running is to be able to open up the conversation with people, to listen to what they have to say and look for ways that we have commonalities, common values and common goals.”

While Albro could be the first female Democrat to represent the Antrim County area, she won’t be the only Democratic woman running for the Legislature against a man in traditionally Republican areas of northern Michigan this November.

Female Democrats on the ballot in northern Michigan are:

• Betsy Coffia, a Democrat from Traverse City who is currently a Grand Traverse County Commissioner, beat Michael Brodsky for the Democratic nomination in August and will be up against O’Malley in November.

• Jenn Hill, a Democrat from Marquette, will be up against Republican Molly Wagner to represent the 109th House District after defeating Democrat Joe Boogren in the primary.

• Marie Fielder, a Democrat from Alpena, ran uncontested in the primary and will face off against Republican Cam Cavitt in the general election for the 106th House District.

• Barb Conley, a Democrat from Northport, will face off against state Rep. John Damoose (R-Harbor Springs) in the 37th Senate District, after beating out right-wing radio host Randy Bishop, commonly referred to as “Trucker Randy,” who ran as a Democrat, even though he’s a former GOP official.

• Amanda Siggins, a Democrat from Cadillac, will face off against Republican Joseph Fox in the 101st House District.

• Jodi Decker, a Democrat from Sault Ste. Marie, will face off against Republican Neil Friske, in the 107th House District.

Spokespersons for the Senate or House Republicans did not respond to requests for comment for this story.

There has been a national trend of more female candidates running since the 2016 presidential election Trump won. In Michigan, the number of women in the Legislature, who currently make up 36% of the House and Senate, has increased by 16% since 1994, according to a recent report from RepresentWomen. Much of that gain has been made post-2018 when a wave of women ran and won local, state and national offices in response to former President Donald Trump taking office after defeating the first major party female presidential nominee, Democratic former Secretary of State Hillary Clinton.

A majority of the women who ran during the “pink wave” in the 2018 midterms ran as Democrats. According to EMILY’s List, an organization that helps elect women who support abortion rights, 356 women Democrats filed to run for Congress that year compared to 120 Republican women.

The northern Lower Peninsula has been mostly Republican for decades. But the Upper Peninsula was a stronghold for Democrats — primarily those who were pro-union, pro-gun and anti-abortion — until the tea party tide crested in the 2010 election and the GOP made gains in most counties. The most visible change is that the 1st Congressional District, which was represented by U.S. Rep. Bart Stupak (D-Menominee) for almost two decades before retiring in 2010, has been in the hands of Republicans ever since. Pohutsky said these races in northern Michigan are “really significant,” especially as Michiganders gear up to vote on a ballot proposal that would codify reproductive rights and abortion access in the Michigan Constitution. Recent polling shows that abortion is the top issue for Michigan voters.

Both the House and Senate are GOP-controlled, but Democrats are hopeful that they can win a majority in one or both chambers this fall after the redistricting process.

Coffia points to a local example that shows reproductive rights could be a significant factor in how well progressive female candidates do in northern Michigan.

On May 2, a draft opinion from the U.S. Supreme Court that confirmed the court was planning to overturn access to abortion was leaked. The next day, Leelanau County voted for Republican County Commissioner William Bunek to be recalled and replaced by Democrat Lois Bahle.

Coffia, who has been a longtime progressive activist in northern Michigan, believes that the fear of losing reproductive rights in Michigan brought many people out to the voting booths for that special election.

“People came out in droves and flipped the county commission, which is in my district, for the first time in history. And she had run twice against him before and lost both times,” Coffia said.

Matt Grossmann, a political science professor at Michigan State University, said an issue like abortion access in Michigan could bring some Republicans to the center-left, which could in turn change the political makeup of the state’s northern region.

“Typically, whenever a big unpopular policy moves in one direction, everyone moves toward the other side,” Grossman said. “For the people who are normally not on that side, it might be less of a move for them. … On abortion policy specifically, most people are not at the extremes. For example, very few people are for late-term abortions and few people are against exceptions for rape or incest. And that leaves a lot of room for disagreement, obviously.”

Much of northern Michigan, especially in the U.P., is considered an abortion desert, meaning pregnant people have to travel more than 100 miles to access abortion providers. Many travel to Southeast Michigan and Minnesota to get care. Wisconsin used to be an option, but abortion has been banned there following the Supreme Court decision.

Beyond abortion care, health care in general in northern Michigan is more difficult to access.

That’s part of the reason Coffia decided to run. She grew up in a rural, working-class family that didn’t always have access to basic health care.

“It wasn’t because we didn’t work hard. Mom cleaned houses for a living and she’s the hardest-working woman you will meet. But it was simply unaffordable, and it’s gotten worse,” Coffia said. “We need access to more providers and we need to close the gap so that everyone can get the care they need and not be worried about going bankrupt to get it.”

Fielder, the Democratic nominee from Alpena, said the issues she hears most about when she’s knocking doors or making calls are the dinner-table issues — affordable housing, education and health care, to name a few.

And while she said it’s difficult running as a Democrat and as a woman in a traditionally red district, she noted that in rural areas, relationships matter.

“Even though it’s challenging, voters see me, they see who I am and they see my history in this region. I’ve lived here my whole life. I understand,” Fielder said. “I just do not believe that remaining where we are, with this constant angry rhetoric, is healthy. It’s not. It’s not conducive to building our communities, nor is it conducive to the family unit.”

Originally published Sept. 3 in Michigan Advance. It is republished with permission.